Discover the Air Jordan 1 Mid Iridescent Reflective White, its release details, resale value, tips on how to buy, and information on how to spot a fake

The Jordan 1 Mids have been particularly profitable this past week, especially in women’s sizes that have actually started to sell out. The Air Jordan 1 Mid iridescent Reflective White / White Lightning was released in December of 2019 for a retail price of $120.

Stick around for a closer look at this valuable Jordan 1 Mid!

Fall is here once again and it brings a plethora of new sneakers from Nike, Adidas, New Balance, and others. Check out the hottest sneakers to resell this October! For a better chance at copping all of them, join our Winner’s Circle, the most supportive and informative cook group that you can find.

Before taking a closer look at this Air Jordan 1 Mid, let me walk you through a bit of history and this silhouette’s resale potential in 2021!

Although there’s not much history backing up this silhouette’s value, they’re not much different than the revered high-tops and are simply ¾ cut versions of them.

However, the Last Dance Documentary, its less costly price tag, and wider availability have boosted the Jordan 1 Mids’ popularity and now has likely overtaken the Jordan 1 Lows when it comes to resale potential.

Popularity also may have risen due to popular collections such as the ‘FEARLESS ONES’ which includes collaborations with brands such as Melody Ehsani and FACETASM.

Resale in 2021 is decent but choosing the right pair can still be a gamble.

Although normal colorways like the Guava Ice and “Banned” aren’t super-profitable, the “Iridescent” line has significantly appreciated in value over time. 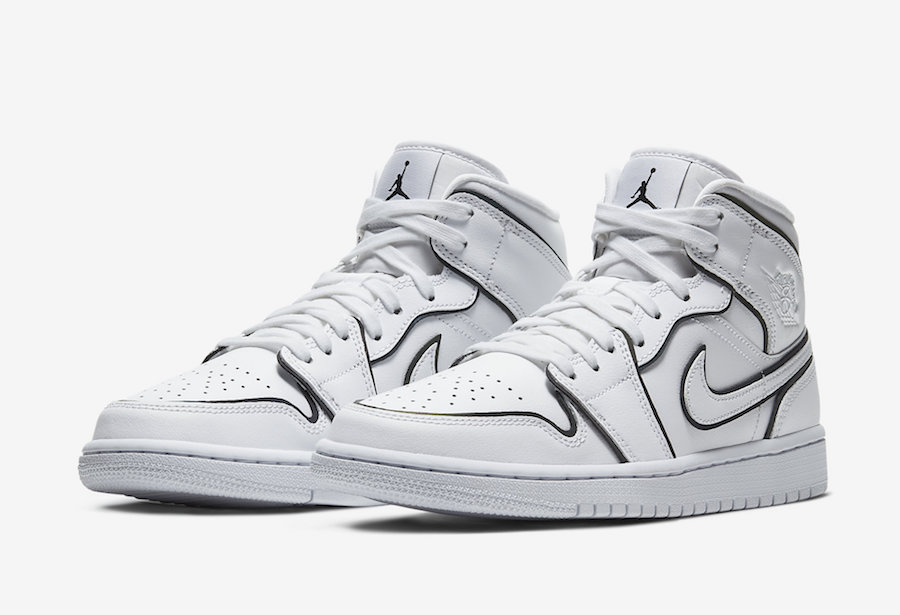 This Jordan 1 Mid features a pretty clean design until the lights go off.

A clean white leather material covers almost the entirety of the sneakers, appearing on the toes, scuff guards, eye stays, Swooshes, and heels. The only contrast appears as subtle black outlines along with the swooshes and on those that border the overlays.

When the lights go out, however, these lines shimmer in iridescent purple, blue, and green sheens.

These kicks were released in December of 2019 via Nike.com and select retailers for $120 in women’s sizes.

Today, you can buy them on the secondary market such as StockX and GOAT.

These sneakers, when released at the tail end of 2019, weren’t all that profitable but over time, resale gradually increased.

Up until April of 2020, the average selling price was just around $150 per pair, a gross profit of $30. Starting from June, however, things took a turn, and resale for this silhouette skyrocketed.

As you can see, the average selling price more than doubled in just a few months’ time. Will they perhaps rise in value even more with time? It may actually just happen.

There are an innumerable amount of Jordan 1 Mid fakes out there, especially for popular colorways such as this. To better spot a fake, check the following:

Where to Buy (Retail):

For more content such as this, sign up for our newsletter below. To get a detailed reselling education, check out our Hypemaster Playbook!