May 2020 Yeezy releases and Resale Guide 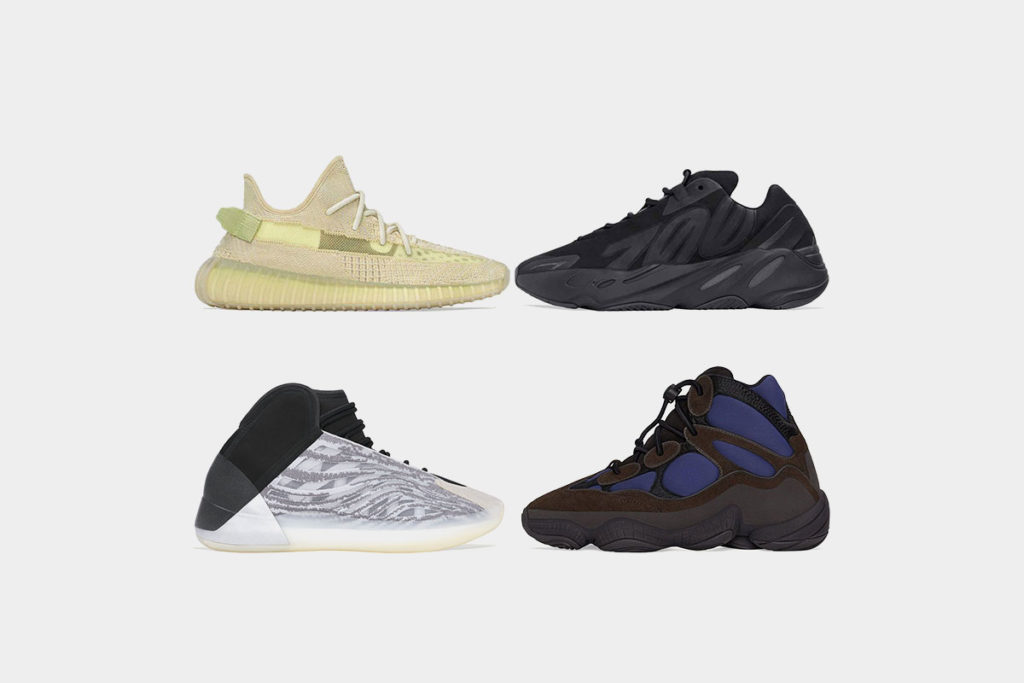 With sneaker drops at an all-time low, we’re feeling pretty lucky for the handful of May 2020 Yeezy releases. Some of which may make up for all that lost excitement!

Keep reading to know what the drops are and their resale estimates.

Although it is uncertain what will happen to the 2020 sneaker market. It still is a great time for a side hustle so make sure to get a piece of this Billion-Dollar Pie.

You can check our blog for some re-selling education! Also I urge you to sign up to our news-letter below to never miss out on drops and important information.

Let’s get right to the drops! The first of the May 2020 Yeezy releases is the Yeezy 350 V2 “Flax”. Now this sneaker dropped before on the 22nd of February and was fairly limited.

The limited quantity as well as it being an exclusive to only African and pacific regions definitely influenced the resale value.

The sneakers are reminiscent of various previous colorways with vibrant yellow prime knit uppers. It has a resemblance particularly to the Marsh and Linen colorways.

The translucent signature stripes are also on the sides. The boot mid sole is a translucent grey color and finally, a gum rubber out-sole finishes of the design.

Since this is a restock. You can probably find many reviews on it whether you’re thinking of coping one for yourself in a personal size.

On the resale side, this did decently well. For a Yeezy Boost 350 V2. As always, Yeezy keeps pumping out new colorways, they keep getting sold out and resale is still decent.

Kanye West always had a vision to provide everyone that wanted a Yeezy with a Yeezy. He called it the “democracy Philosophy” which is not too good for resale.

People are also starting to believe the Yeezy 350 V2 has lost its “wow” factor.

However, the resale value is still alright. You may have earned good profits had you copped them after the initial release. This did do quite well with an average profit of $330 and peak profit of $280 before taxes and service fee.

After the drop however, expected the resell price to drop to around $280. For a more detailed look, see our article. Along with the re-stocking of the “Flax” colorway. Yeezy is set to release the 350 V2 Sulfur on the 9th of May as a shock drop. You can grab these from very select retailers and Yeezy Supply for $220.

The sneaker is covered in a light olive hue reflective with a rear yellow boost pod. It also has the typical gum rubber out-sole and is reminiscent of the “Linen” colorway.

Expect these to be a good bit profitable as it seems to be slightly more limited. A few places will have access to them which may drive up resale value.

According to StockX the trade range is between $335-$431 with the average price being $434. That’s pretty good however it may drop after release date. Expect resale to be over $300.

That’s an average profit of $80 per pair before taxes and service fees. It seems like forever since these kicks were announced to be released for All Star Weekend. We do have some good signs for them releasing this month however.

The Adidas Yeezy Basketball Quantum is the first time Kanye is entering the basketball sneaker game with Yeezy. They are similar to the Yeezy 350 V2 but with sued, reflective Overlays and an extended collar.

These are expected to be very profitable as Ye’s first entry into the basketball game is super hyped. The sneaker itself is also a head turner that distinguishes itself from the rest.

According to StockX, the resale value is insane. The average price is $851 earning you around $600. This may fall a bit after release but definitely a very profitable sneaker. The third Yeezy drop of the month is the Adidas Yeezy 500 in the Tyrian colorway. This is the second release of this silhouette after the slate dropped back on the 16th of December 2019.

The sneaker features a brown upper made of sued, black leather and also blue Neosporin spots. It gives the sneaker quite a nice appearance and is definitely a head turner.

The pair also has a solid black mid-sole and a new lacing system which is a nice touch. It does not however come with boost technology similar to the previous colorway.

Now don’t get too caught up with the looks of it as they may just brick. Hard.

Judging by their previous versions, these are not expected to sell well. The Adidas yeezy 500 slate retailed for $220 and has an average resale value of $238 according to StockX.

If you do the math, by Reselling these after service charges and taxes, you’re likely losing money. The estimated resale value for the Adidas 500 High Tyrian is expected to be around $240. One of the best May 2020 Yeezy Releases is the Adidas Yeezy 700 MNVN Black. Now this will be a re-stock but resale is still expected to be very profitable.

This is a complete blacked out version of the 700 silhouette thus also known as “triple black”. It also features a “700” on the lateral sides and a solid black sole with boost cushioning.

Although this is a restock. Expect resell to be good as the first release was fairly limited which drove up prices. The last of the May 2020 Yeezy releases is the Yeezy 350 V2 ZYON in a reflective and non-reflective version which drops at the end of this month. This colorway is reminiscent of the Static colorway with minor differences.

A translucent boost out-sole and cream colored interior finishes off the design.

Yeezy keeps pumping out the colorways and we keep buying! This colorway however, seems to be super limited as you can only get them at very few select retailers.

Estimated resell seems to be good at around $340 due to it being limited and and all-around good color.

Well there you have it folks! That’s all for the May 2020 Yeezy Releases that we know of so far.

Be sure to check out our Twitter and Instagram for quick info on hot new releases. The SFSH cook group is also great if you want insider knowledge on sneaker re-selling.

If you’re thinking of entering the sneaker re-selling game. The Hypemaster Playbook is just the thing you need!