As part of Adidas’ A-ZX series, they’re set to collaborate with Berlin-based fashion boutique “Overkill” on the new ZX 8500. The Overkill x Adidas ZX 8500, dubbed “Graffiti”, release date is on April 9th for a retail price of $140 per pair of men’s sizes. Keep reading for all the details!

Before we go into details for the Overkill x Adidas ZX 8500 Graffiti, let me walk you through some history.

Designed and made by Jacques Chassaing, the ZX sneaker was the first mass-produced sneaker in 1984 created for two market segments. Lesuire users and professional runners.

Chassaing believed different kinds of runners had different needs from the sneakers thus created shoes with slightly differing functionalities. The ZX 500 and ZX 800, for example, were very similar with slight tweaks to make them suitable for different runners.

After the introduction of the “Torsion” technology on the ZX 8000 in 1988, the sneakers actually pulled way ahead of their time. Their popularity caught on in Europe quickly, particularly in Germany where they became a symbol of hope.

Many of the protestors in the ’80s that were against the berlin wall are believed to be running around in pairs of Adidas ZXs. Recently, Adidas also collaborated with Meissen, a German company, on the ZX 10 000.

This time, they return to collaborate with Overkill, another Berlin-based fashion boutique. Overkill has a solid history in Berlin, initially starting off as a graffiti magazine in 1922 and inspired by Graffiti culture in Germany.

Over the years, they’ve also started delving into streetwear and established a store in “Kreuzberg”, Berlin. After a collaboration with Adidas in 2019, Overkill is back for more to collaborate on Adidas’ new hybrid silhouette!

To estimate resale for the Overkill x Adidas ZX 8500 let’s head over to StockX. 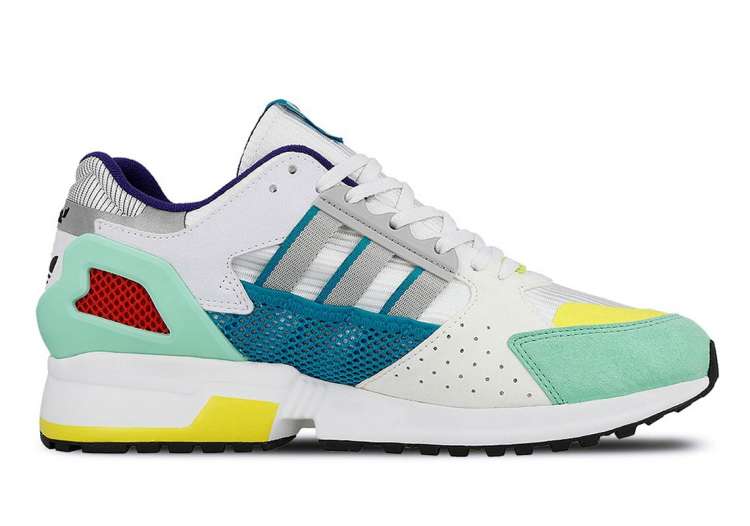 On StockX, the average trade range for these sneakers is around $280 which is a small $30 potential profit. However, they’ve also been sold for much higher prices.

Representing the “O” in the A-ZX series, these sneakers combine elements from the 10.000 and the 8000 model into one sneaker!

Uppers consist of mesh and suede while a profusion of colors, inspired by Graffiti art, embellish the overlays. Neon green hits sit above the silver toe boxes and grey suede toes. In front of which are stitched “OVERKILL” branding while “OK” branding is found in various places.

As an added bonus, these sneakers come with extra laces and protective shrouds from protection against Graffiti paint drips!

You can buy these kicks at Overkill’s website come April 9th. The retail price per pair for men’s sizes is set at $140 per pair.

To buy them sooner for resale prices, visit StockX.

I wouldn’t sleep on these sneakers as previous collaborations have shown that they can appreciate over time. I still recommend going for personals only.

Using my estimated resell, expect gross profits of around $30 per pair. Thus according to our Hype Meter, that’s a “Profit”.

Where to Buy: (Retail) Overkill