Fresh off the “Lightsaber Pack”, Star War fanatics and sneakerheads alike will both have a penchant for the incoming galactic release between Adidas and Lucasfilm.

Note: The sneakers themselves look as if they came from a galaxy far, far away.

Regardless if the shoe is from the Space-Battle themed package or Lightsaber package, you can rock them in your favorite outfit or on the hardwood as any of the sneakers in the package are versatile for selected occasions.

Similar to the epic clash between Adidas and Star Wars, stay up to date with all new hype sneaker news by following us on Instagram, checking the SFS blog, and signing up to our email list.

The release date of the Star Wars and Adidas Battle Pack series is set to be November 21st 2019. In addition, the retail price of the three shoes will vary between $180 to $300.

Adidas – Look out for the package to release at Adidas online as well as select physical Adidas stores.

Athleticwear giant, Adidas, is ready to serve their audience a second running with their Lucasfilm collaboration—“Space Battle.”

The sneakers are inspired by the Star Wars enterprise starships—the Rebel Alliance and Galactic Empire. The sneaker and movie series collaboration will allow one to lace up, while representing a significant element of the Star Wars tale.

Starting out the first of the pack is the X-Wing Starfighter model, which will be released in Adidas very own Ultraboost S&L line.

The Lucasfilm collaboration is evident in the stark similarities of the sneaker’s colorway with the Star Wars ship’s grey and orange artillery and its structural outer.

Adhering the glow-in-the-dark feature, the X-Wing Starfighter features the iconic three stripes in a bright orange metallic finish on a grey shiny mesh from toe to rear.

The sneaker sits on the ever-popular boost technology, while iconic quotes like “STAY ON TARGET” and “THE FORCE WILL BE WITH YOU, ALWAYS” on the heel.

The Alphaedge 4D sneaker is a technological innovation like no other.

Typically designed for running, the silhouette features a 4D Futurecraft midsole which is constructed using a revolutionary digital printing process that essentially converts liquids into solids.

Thus, the Alphaedge is the world’s first performance sneaker made of liquid resin and oxygen. At first glance, the sneaker looks like it teleported here from a galaxy far, far away—thus, the most appropriate for a Star Wars collaboration.

The Death Star, if you’re a fan of Star Wars you know the name as the story’s most notorious space station. If you’re not a fan, you will at least appreciate the stark color contrasts and the detailed design.

Another glow-in-the-dark sneaker, but features a space dark midsole with the pale green outsole. A couple Star Wars fitting quotes had to be imprinted, stating “THAT’S NO MOON” and “THE POWER OF THE DARK SIDE.”

Last but not least, The Millennium Falcon is showcased in the Ultraboost 19 line to allow another Star Wars starship to live on forever in the sneaker universe.

Sporting a white toe and a metallic yard makeup, the grey metalized cage where the Adidas branding is located sits on the graphic-designed boost sole. Finally, a grey and blue finish brings in the rear with Adidas branding on the tongue to finish the look.

Following the trend of its other two counterparts, the Millennium Falcon contains popular Star Wars quotes, such as “JUMP TO LIGHTSPEED” and “NEVER TELL ME THE ODDS.

The Star Wars Adidas Battle Pack is only the second offering from the recent teamwork between Lucasfilm and Adidas.

In fact, the Star Wars collaboration is a line that will release in three parts: a lightsaber package, starships package, and the last will feature the superstars from the beloved Star Wars tale.

Earlier in the month of November, the Lightsaber-themed pack hit Adidas store.

Houston Rocket’s James Harden line, Harden Vol. 4, was one of the three in the Lightsaber pack.

The sneaker boasts a speckled purple colorway that immortalizes the lightsaber wielded by Samual L. Jackson’s character, Mace Windu, during the prequel trilogy.

Portland Trailblazer superstar Damian Lillard also made a splash in the pack, paying homage to Luke Skywalker’s green lightsaber with his Dame 5.

Rounding out the pack is Derrick Rose’s D Rose 10, which comes in the blue colorway. Thus, symbolizing the blue lightsaber that was wielded by numerous characters throughout the saga.

The Six Figure Sneakerhead community is filled with members that scope hyped and profitable sneakers to not only admire the sneaker design and aesthetics, but also to generate profit per pair.

While these sneakers absolutely have generated some hype, there is some resale potential as well.

Sneaker reselling platform giant, Stockx, shows there has already been some sales activity before the expected release date. 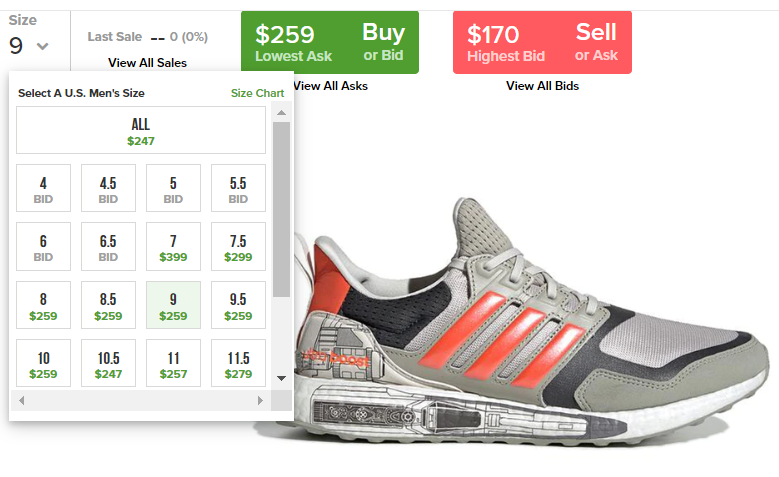 The Star Wars X-Wing sold for $270—and with a retail price of $180, that seller made a decent sum of money with one pair. 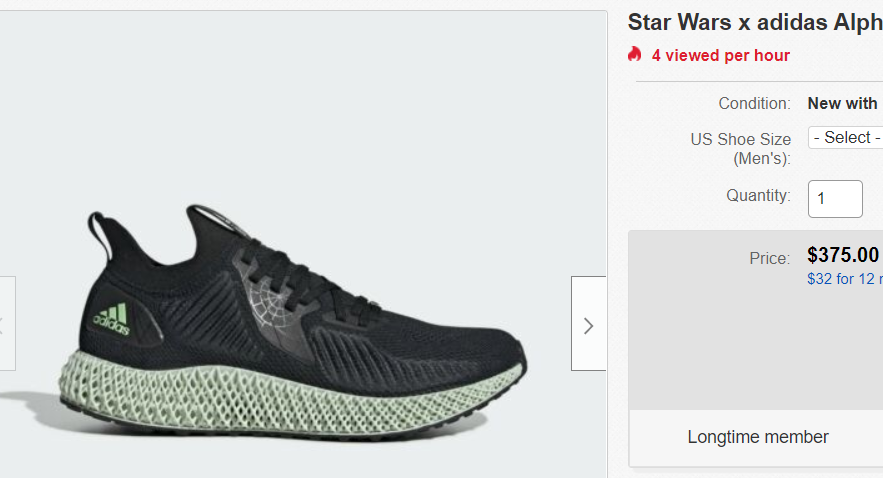 Moving on over to eBay, the Star Wars Adidas Alphaedge Death Star, retailing at $300, is being resold for almost $400.

The Star Wars and Adidas combination is set for creativity and performance, all the while paying homage to one of the most brilliant Sci-Fi films ever.

Make sure to check SFS for the next pack, soon to be released revolved around the characters themselves.