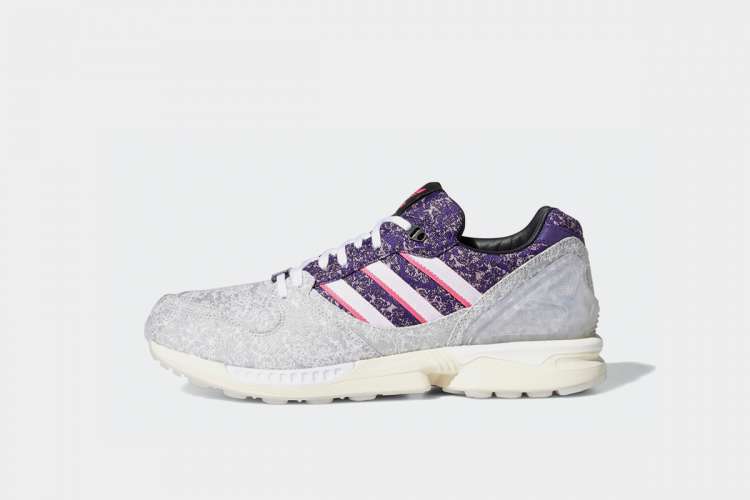 Adidas gives their ZX 8000 silhouette an opulent new make-over with their latest french-inspired colorway! The Adidas ZX 8000 “Vieux Lyon” Release Date is on January 8th with a retail price of $140. Keep reading to know all about it!

The ZX 8000 has been receiving a lot of love from fans after releasing popular collaborations with companies such as Meissen and UNDEFEATED. Adidas is now set to release a stand-alone ZX8000 which is inspired by a small river-side city in France.

Before we take a detailed look, let me walk you through the Adidas ZX’s rich history.

The ZX was one of Adidas’ first mass-produced running shoes when it first came onto the scene in 1984. Created by Jacques Chassaing, these sneakers were designed to cater to two specific groups of people i) professional Runners and ii) leisure runners.

Chassaing believed that every runner was different and thus created the ZX 500 and ZX 800 with slightly different functionalities.

Then in 1988, the ZX 8000 entered the market with a brand new “Torsion” system. This technology was so revolutionary that it is still used in Adidas sneakers today including in different Adidas models.

In Europe, these sneakers were used for more than just running. Their springy functionality enabled them to be popular dance shoes for people as they began popping up on the feet of more and more dancers in England.

Even in Germany, the Adidas ZX is somewhat a symbol of freedom. It is said that protesters of the Berlin wall during the ’80s wore the ZX when they were outside and fighting for their freedom.

Today, the line continues with exciting new colorways and collaborations. To estimate how much the latest Vieux Lyon inspired colorway will resell for, let’s head over to StockX.

The base of the sneaker comes in a patterned white while Royal Blue covers the side stripes, toe, and hints on the heel, white Suede overlay with pink hits provide further contrast. A white midsole and matching outsole complete the design.

These sneakers are part of Adidas’ A-ZX series which consists of 26 hybrid sneakers, each hybrid donning a different story of the ZX’s heritage.

The Adidas ZX 8000 Vieux Lyon pays homage to the French town that it has taken its name from with Jacquard materials on the upper that first originated from that city. Rather than being stamped or printed, the pattern over the regal purple and grey material is woven into the upper.

Pink Adidas branding on the tongue, white/pink side stripes, and white laces add a touch of femininity. An off-white midsole and a Torsion white outsole complete the look.

These sneakers may sit on shelves with some sizes being sold out. Resale for them also likely won’t be very high as the ZX 8000 has been quietly slipping under people’s radars.

Using my estimated resell value of $140, you likely won’t earn any profits by selling these sneakers. They may even sell for discounted prices down the line.

You can buy these sneakers exclusively via the confirmed app on January 8th, 2021. The retail price for each pair is set at $140.

Where to Buy: (Retail) Adidas App