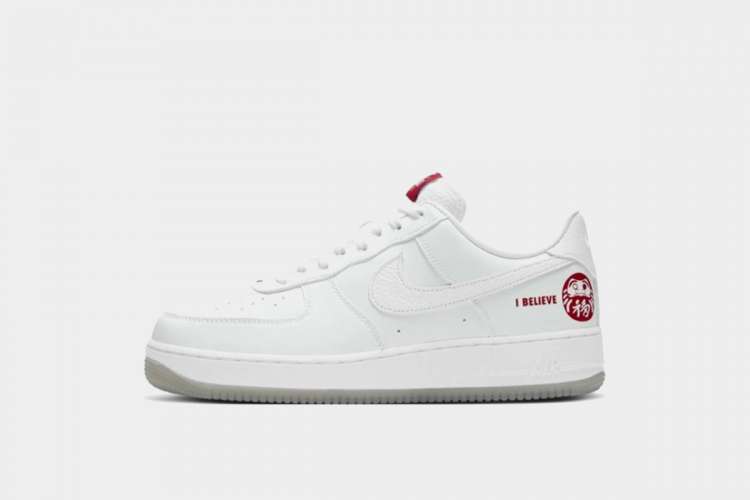 A beloved colorway from 2002 returns and makes its way onto Nike’s latest Air Force 1 Low! The Nike Air Force 1 Low “I Believe” Release Date is on January 9th with a retail price of ¥11,000 ($106). The official price in USD is yet to be confirmed.

Before we take a detailed look at this brand new Air Force 1 Low, let me walk you through its history!

After releasing various running sneakers, Nike decided to go all into the basketball world with their latest Air Force 1. A design that was so revolutionary that it is still worn as street-wear to this day.

Bruce Kilgore was the mind behind the Air Force 1 for which he took inspiration from the Nike hiking boot.  Kilgore’s design was so high-tech at the time that it’s still used in Nike sneakers today.

After releasing it in 1984, Nike decided to discontinue the sneaker. The AJ1, however, was so popular, demand practically forced Nike to bring it back in 1986. Air Force 1 released in multiple colorways and has been the canvas for a few popular collaborations.

Then in 2002, Nike released a Japanese exclusive that was inspired by a “Daruma” doll as part of their CO.JP lineup. The original is still quite rare, however, the Swoosh has revealed their latest reiteration of the colorway with the Nike Air Force 1 Low “I Believe”.

To estimate how much you can resell them for, let’s head over to StockX.

This sneaker features a “waterway” upper that’s built with a combination of leather and a scale textured material. Lazer blue laces provide contrast while dark blue insoles and midsoles complete the look.

On StockX, the average selling price is around $210 which is a gross profit of $80 per pair. I believe the Nike Air Force 1 Low CO.JP “I Believe” will have slightly lower profit margins.

These Japanese Daruma-inspired kicks come primarily in a plain white upper with a tumbled leather overlay on the ‘Swoosh’ and tongues. Apart from the red “I Believe” and Daruma printed near the heel, these sneakers transform with a profusion of different colors underneath.

Once scrubbed away, vibrant patterns of gold, red, and even black appear which nod at the Daruma doll’s Japanese heritage. These sneakers are a Japanese way to bless the new year as “Fortune” is printed onto the sneakers.

A white midsole and semi-translucent outsole complete the look.

These shoes will likely sell out and be profitable as well. The originals from 2002 are still quite sought after and these sneakers will likely be as well for a while.

Using my estimated resell value of $150, expect gross profits of around $50 per pair.

Nike Air Force 1 Low “I Believe”| Where to Buy

You can buy this Air Force 1 Low at select retailers and Nike.com. Beginning January 4, a raffle to buy the Nike Air Force 1 “Believe Daruma” for ¥11,000 JPY ($106 USD) launches on atmos’ web store where you can also vote for your favorite accompanying artwork.

You can also buy them on reseller websites like StockX.

Have a great week!