Among the cluster of new releases planned by Nike for the Summer of 2021 includes a brand new LV8 Air Force 1! The Air Force 1 Low “Paint Splatter” release date is on April 29th for a retail price of $110. Stay tuned to know all about it!

Before taking a detailed look at this brand new Air Force 1, let me walk you through its history!

Nike Air Force 1 | Past vs Future

The Air Force 1 Low initially released in 1984. A time that was golden for Nike as just a year later, they would go on to release the Nike Dunk Low and Air Jordan 1. Both of which are one of the most popular sneakers today.

Bruce Kilgore designed them to be timeless classics and it worked well. Not only is the AF1 still a top-seller, but it also inspired other hyped sneakers such as the Dunk Lows. You may have noticed the similarities in appearances.

Although intended as basketball performance sneakers, it wasn’t long until people started dressing up in these kicks, wearing them as streetwear.

The plain white Air Force 1s soon became a fashion staple and a must-have in anyone’s wardrobe. Although the basic design has remained the same, the AF-1 has gone through various changes, non-more drastic than the latest Air Force 1 Low Experimental.

Although the “experimental” are just experiments, the Air Force 1 has evolved in other incremental ways.

In 2015, the AF1 LV8 released with a slightly different print on the uppers. Giving it a unique appearance to past models. Meanwhile, the Af1 ’07 includes a special lace deubré that’s exclusive to the ’07 models.

In recent years, unless it’s a special model, Air Force 1 Lows aren’t really that profitable on the resale markets. To estimate resale for the Air Force 1 Low “Paint Splatter”. Let’s head over to StockX.

The average selling price on StockX is $130 which is a $20 gross profit. The Nike Air Force 1 Low Paint Splatter will likely have a slightly higher resale value.

This AF1 features a leather Light Bone upper that’s contrasted by random splatters of colors. Of which the dominating hues are black and yellow that cover the laces, perforated toe boxes, and the side panels.

You can buy these kicks at select retailers and Nike.com come April 29th. The retail price per pair is set at $110 for men’s sizes.

To buy them today, visit reseller’s websites such as GOAT.

These sneakers may not sell out and I recommend going for personal sizes only.

Using my estimated resell value, expect lunch money in gross profits of around $25. Thus according to our Hype Meter, I give these sneakers a “Retail”. 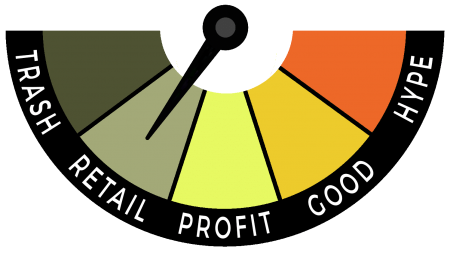