When it comes to just the cleanest looking sneakers ever, nothing beats the Air Force 1 in one of its classic colorways. The Air Force 1 Low University Red releases on the 27th of June with a few minor tweaks than previous renditions. Stick around to know all about it!

As June is coming to an end, the frequency of drops has gradually been increasing. This provides a lucrative opportunity for re-sellers to make thousands every month! You too can get a piece of this Billion Dollar Pie with the right knowledge.

I suggest checking out our blog for a free re-selling education. We drop frequent articles with release and resale guides on the hottest sneaker releases. Sign up to our news-letter below to never miss out!

June seems to be a very busy month for the Air Force 1. From women’s exclusive packs called P(her)spective to home & away pack releases, we’ve seen them all this month.

The Nike Air Force 1 Low University Red definitely seems to be one of the most hyped ones for the month so without further-adieu, let’s get right into it. 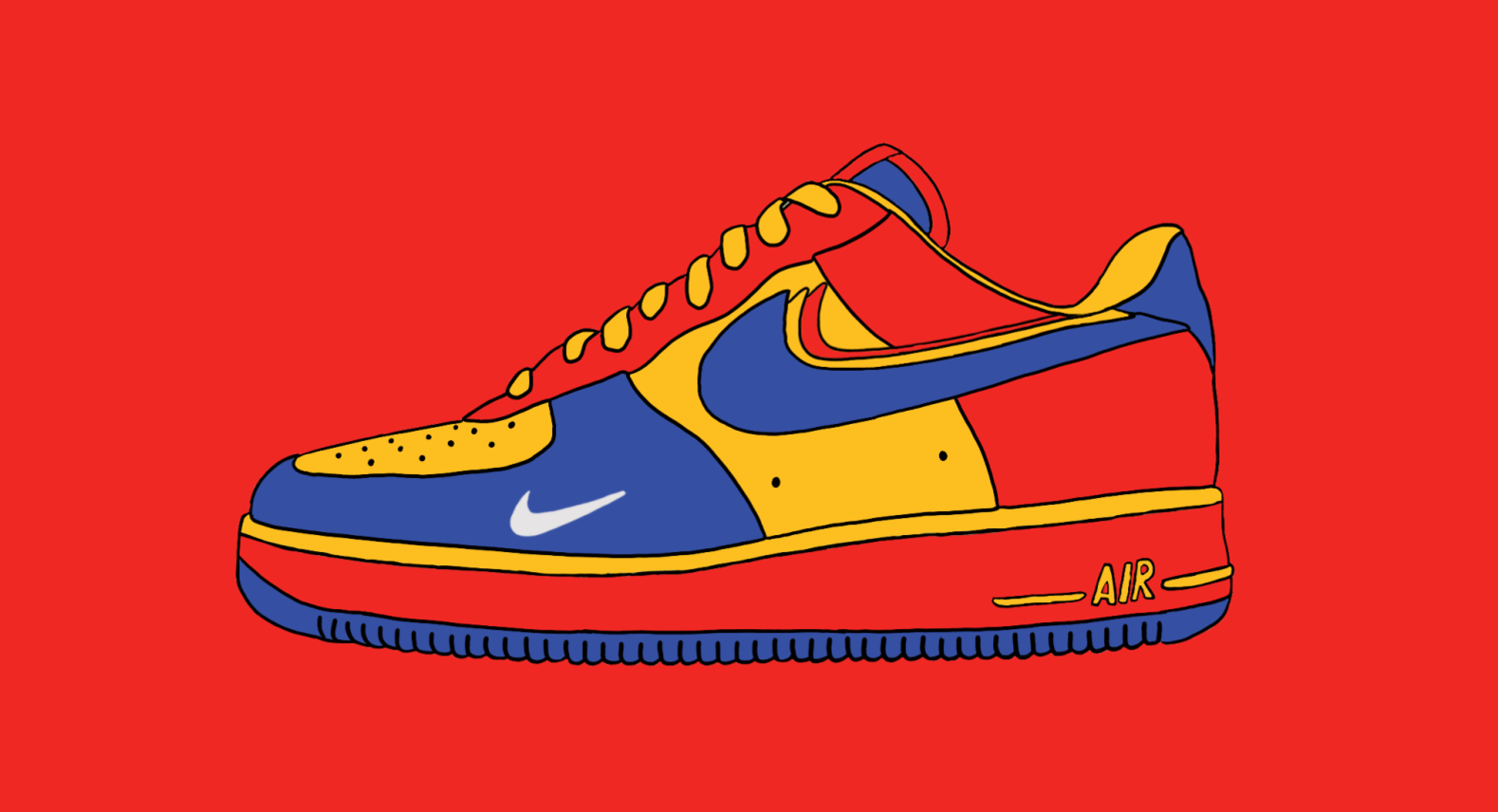 Legendary designer, Bruce Kilgore was the mastermind behind the Air Force 1. He took inspiration from the Nike Hiking boot but adjusted it so the sneaker was stable yet flexible.

The Air Force 1 is also what started the circular sole pattern which is still used in other Nike sneakers. The low top variants have still kept the design and similar color tones as well.

The Air Force 1 went into production in 1983. Unfortunately, it had to be discontinued all while demand remained sky high. Nike even signed 6 NBA players, all of whom were supposed to wear the Af1 during Playoffs.

An interesting fact is, the Air Force 1 even inspired Tinker Hatfield to create his own sneaker. Tinker was just a corporate architect working for Nike prior to witnessing the AF1.

The sneaker saw a mass release in 1986 and is still one of the most popular sneaker on the market. 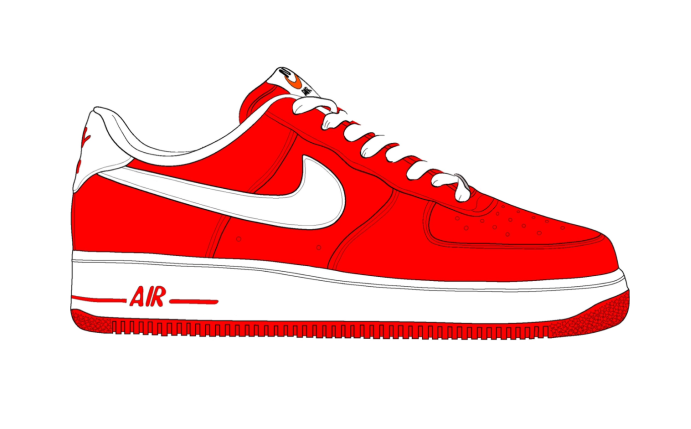 Nike started its collegiate colors program with the release of the Nike Dunk. The Dunk took inspiration from various Nike sneakers especially from the Air Force 1.

During the 1980’s, college basketball was on the rise so to compete in this environment. Peter Moore decided to introduce the program with different colorways for different schools. They included 12 major Universities including Arizona, Georgia, Georgetown, Syracuse and Kentucky.

The university red has seen many iterations across various silhouettes and is still very popular.

That’s not all though. Along with footwear, the program also included apparel and bags in university color coordinated schemes. It was an excellent market plan during the time and Nike still uses it today.

The resale for the Air Force 1 however, in standard colors is a hit or miss. They’re pretty average when it comes to being quickly flipped with only a few that really stand out.

To estimate the resale value of the Nike Air Force 1 Low University Red. We can assess how similar colorways are doing on the resale market and make an estimation. 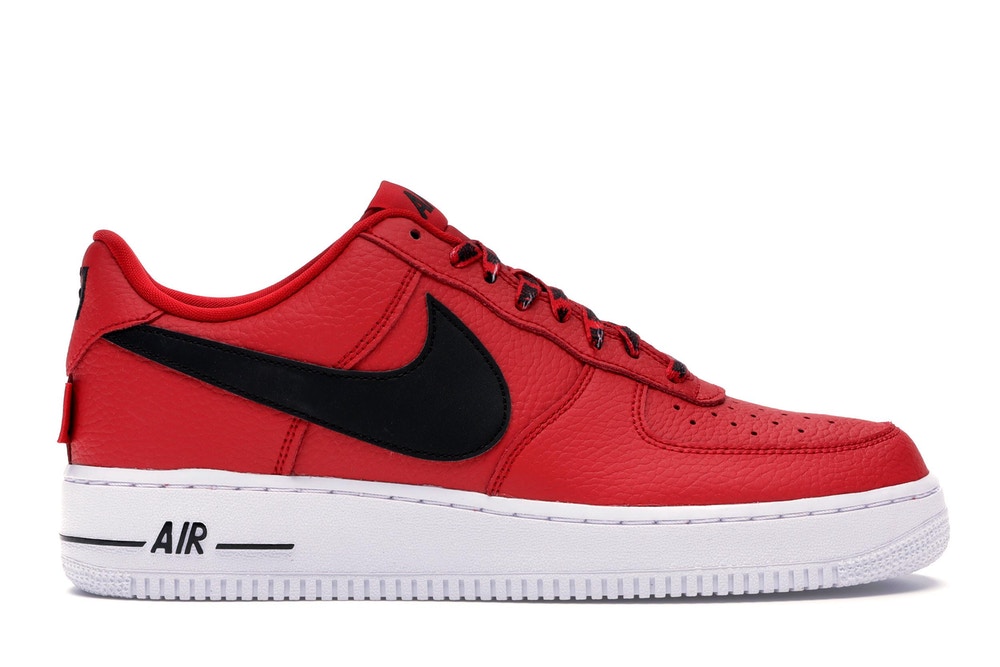 These sneakers dropped back in 2017 with a pretty low price tag of $100. They featured a “University Red” tumbled leather upper with black hits throughout.

It comes with a bold black Nike “Swoosh”, black “Air” branding on the mid-sole and tongue. A crisp white mid-sole and out-sole finishes off the design.

These unfortunately haven’t seen much success on the resale market. According to StockX, the trade range is between $116-$184 with an average price of $116. After tax and service fee you’d be losing money.

Recently however, they’ve appreciated in value, reaching prices as high as $225. That’s over a hundred dollars in net profits per pair. 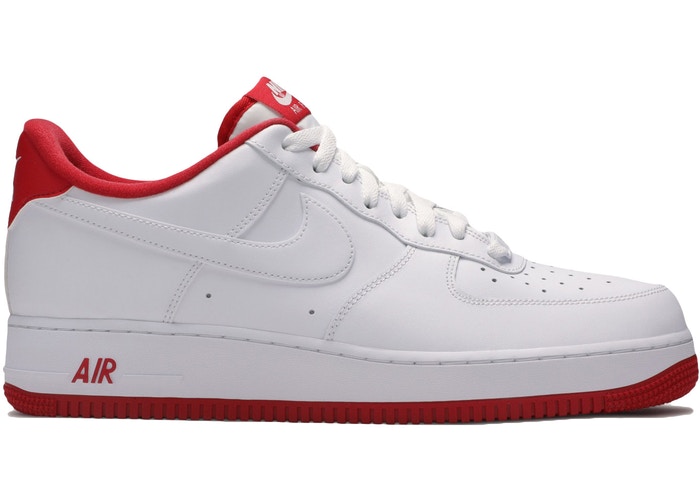 This sneaker features a white upper with subtle red hits throughout, providing a pleasant contrast. It comes in white laces and a white Nike “Swoosh” while the heel, tongue and out-sole feature a “University Red”.

The trade range is between $102-$138 with the average price being $95. That’s pretty poor resale when you deduct tax and service fee. However, certain sizes are profitable such as 7, 10 and 9.5

The resale is also quite volatile so some profits are possible. At peak resale, profits are over $100. 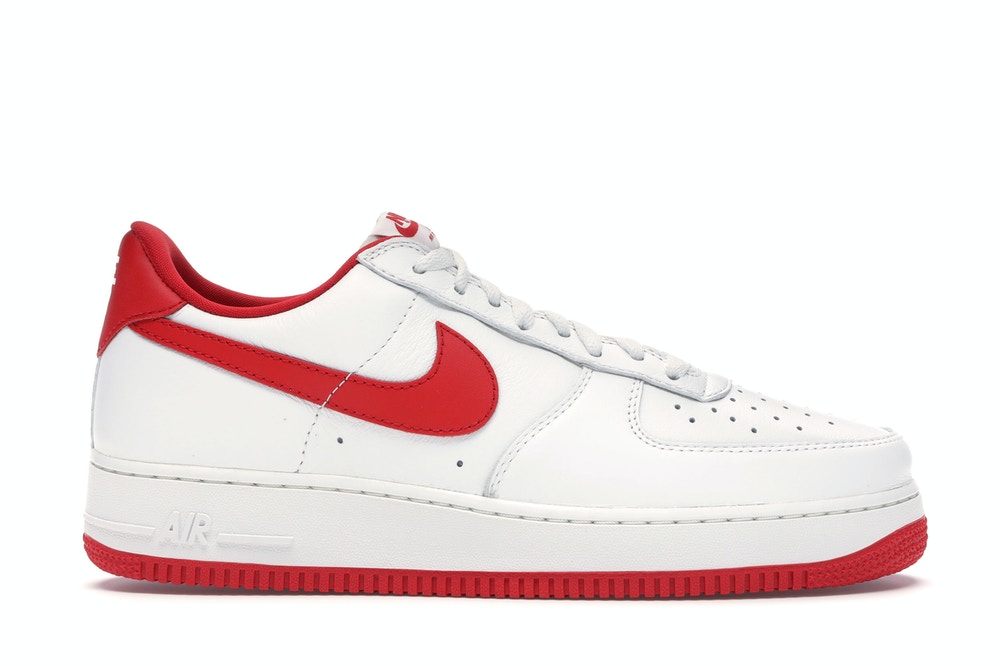 This is probably the most similar colorway to the Nike Air Force 1 Low University Red 2020. It features an all-white upper with white laces and a white mid-sole.

A red Nike “Swoosh”, red heel collar and red “Nike” branding on the tongue provide some contrast. A bright “University Red” out-sole finishes off the design.

As for the resale, they’ve bricked quite hard I’d say. The trade range is between $82-$96 with the average price being $96. Even though the market has been fairly unsubstantial, it’s mostly all losses.

At peak resale however, profit is around $50 before tax and service fees. Thus we get a pretty good idea of what to expect from the Nike Air Force 1 Low University Red 2020. 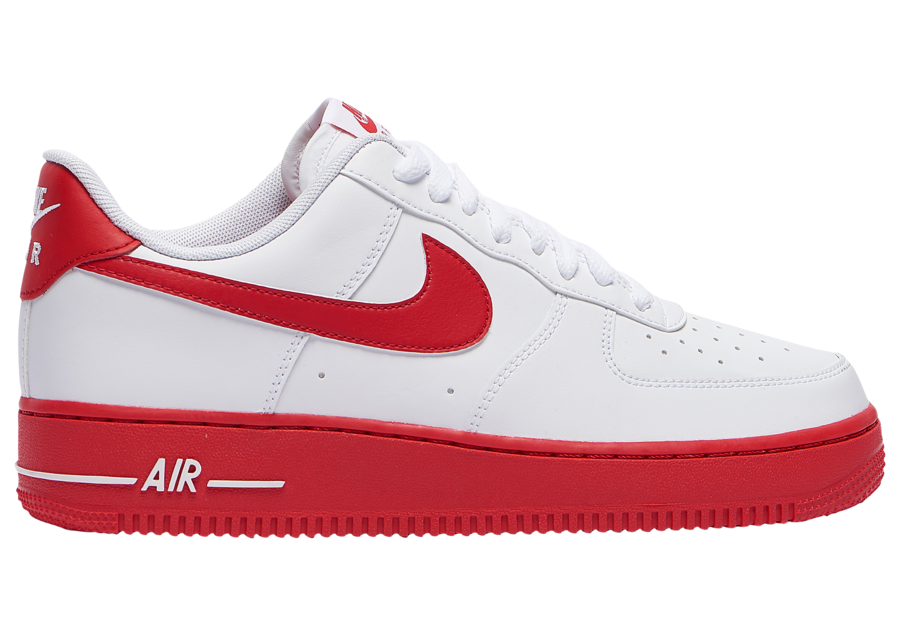 This time around, the Air Force one’s panel is pretty much dominated by a crisp “White”. A “University Red” heel overlay provides a much needed contrast along with a red Nike “Swoosh”.

The most notable feature is the almost completely red sole of the sneaker. Apart from the white “Air” writing on the lateral side, a completely red out-sole and mid-sole finishes off the design.

Although the release date of 27th June may be subject to change, take a moment to enjoy these detailed shots provided below. 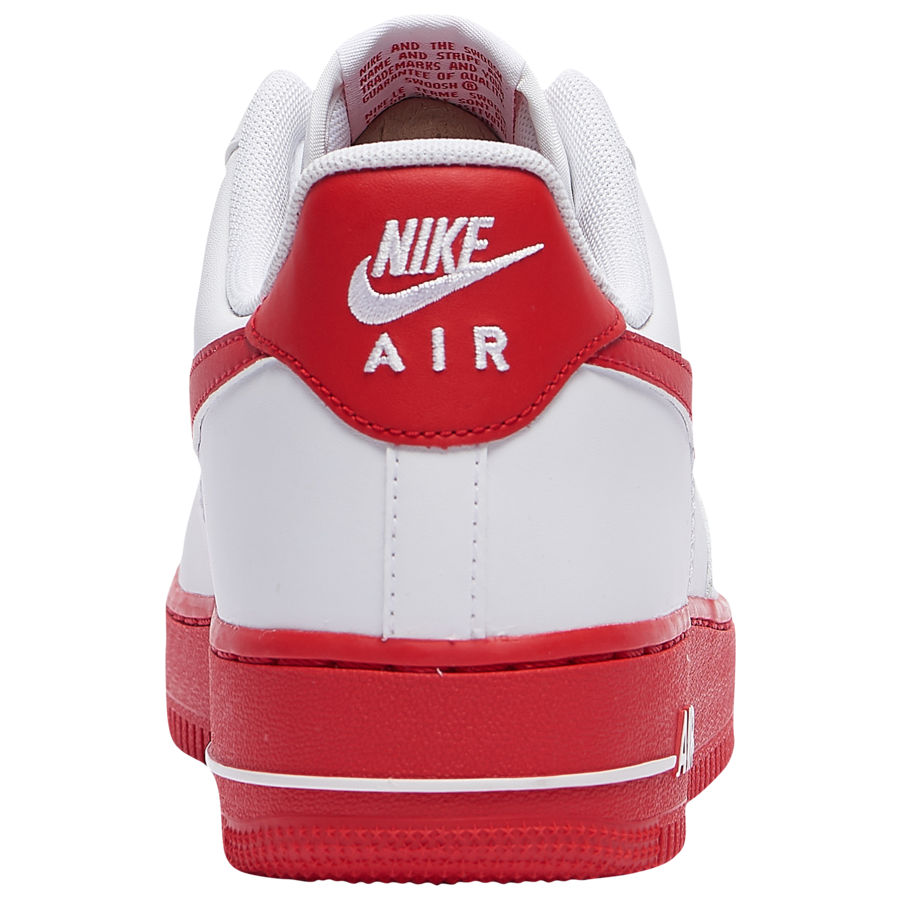 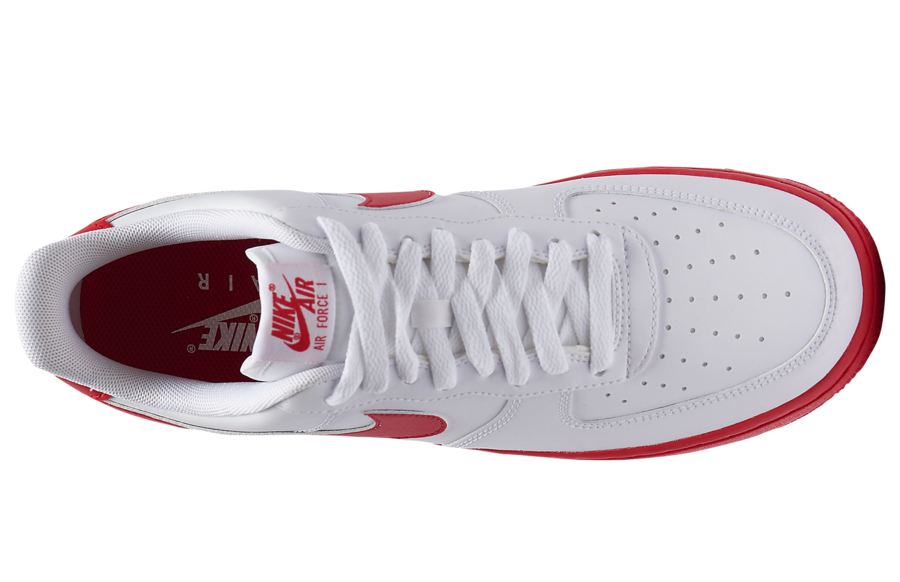 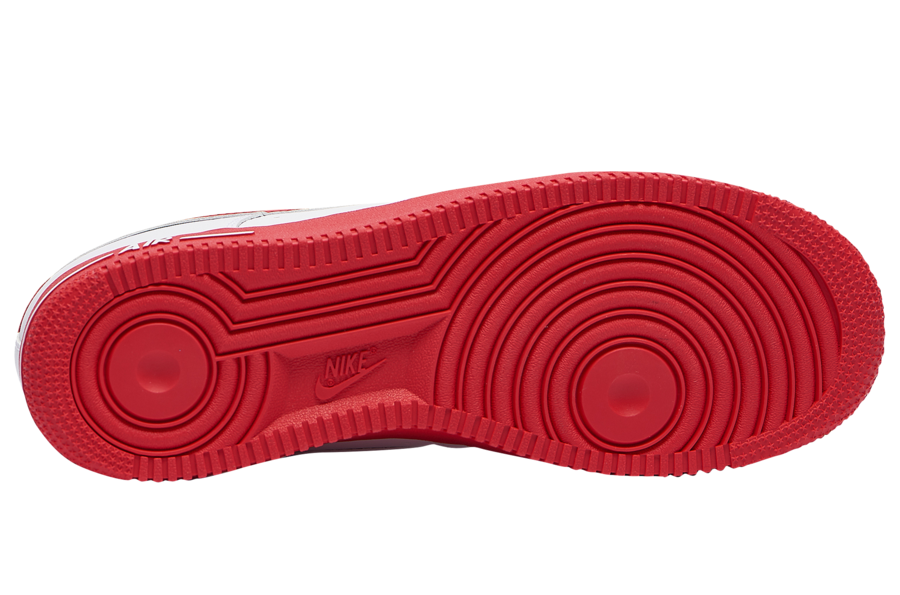 After analyzing the similar sneakers mentioned above, I don’t see these sneakers being too profitable. Sure, if you managed to cop before release date, gross profits of $60-$100 are possible.

After release however, I expect prices to drop as Air Force 1 University Red colorways aren’t doing too well on the market recently.

To get your money back after a standard US tax rate and service fee. You’ll need to sell for at least $107. Using my estimated resale value, you’re looking at a potential profit of around $5.

I expect these might do a bit better than the aforementioned colorways as bids are still rising. However, I still don’t expect anything much higher. 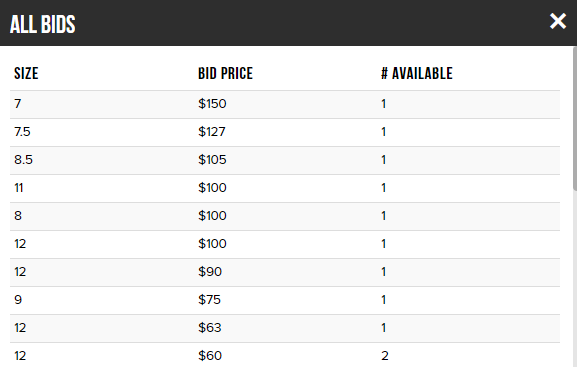 If you can manage to sell on other websites such as eBay, profits will probably be higher at around $15 which I suppose is good lunch money.

The Nike Air Force 1 Low University Red is expected to drop on the 27th of June for $90. You can get these at select Nike retailers and Nike.com.

You can get them today from re-seller websites such as StockX and GOAT. You will have to pay premium for that however. I suggest waiting a few days as the prices are expected to drop.

Where to Cop: (Retail) Nike.com

For all the struggling re-sellers out there, I recommend reading the Hypemaster Playbook. It’s a step by step guide with all the essential knowledge to get your re-selling game to the next level!