Supreme and Nike continue their partnership in 2021 with an array of planned releases of various Nike sneakers including an earthy new Air Force 1 Low. The Supreme x Nike Air Force 1 Low Flax release date is rumored to be this June for $96 (TBC). Stay tuned for more details!

Like most months so far in 2021, May has been chock-full of extremely lucrative sneakers and June is shaping up to be just as profitable. Check out what June has to offer in terms of hyped sneaker releases!

Before we estimate the value resale of the Supreme x Nike Air Force 1 Low Flax. Let me walk you through this duo’s history.

Supreme x Nike | A Match Made In Heaven

Supreme opened up as a skate shop in 1994 in a store in Manhattan. They started off selling limited skateboards and related apparel. Setting them on a trajectory to an inevitable collaboration with Nike SB.

Founded by James Jebbia (who also worked with Shawn Stussy), this store sold hoodies and shirts aimed at the growing skate scene in New York.

They quickly rose to prominence owing to their high-quality apparel and their effective marketing strategies aimed specifically at New York’s skater scene.

The brand was reluctant to expand as it had become the king of underground fashion. However, a collaboration with Nike made that difficult, propelling Supreme into becoming a household name in 2002.

Nike SB collaborated with Supreme on the SB Dunk Low Pro. Ever since then, the duo has dropped a myriad of collaborations on various silhouettes. Recently dropping the popular Supreme x Nike Air Max Plus in 2020 and collaboration on the Air Max 96 in early 2021.

The upper features a predominantly black upper with the only contrast provided by the lateral heel’s “Supreme” logo.

The average selling price of these sneakers is currently around $180, a gross profit of almost $80. The latest ‘Flax’ colorway will likely have a similar resale value. 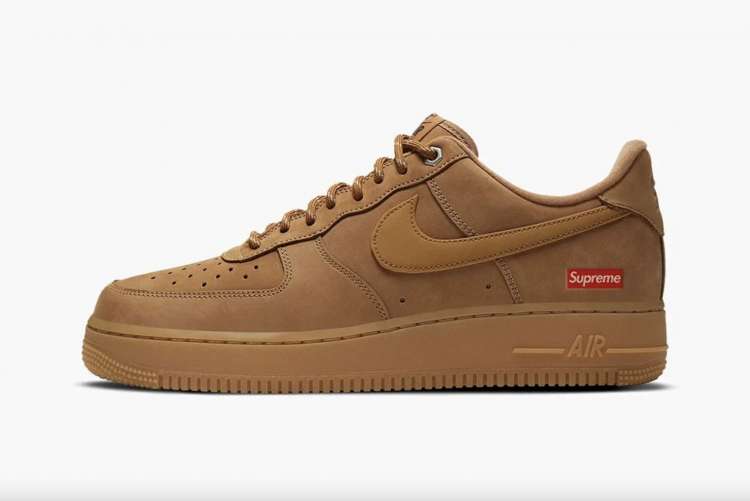 Although no official images have yet surfaced, we do have a good idea of what to expect.

Design cues are likely borrowed from 2019’s Air Force 1 Low Flax with boot-like features. Firstly, the upper eye stays are expected to be metallic while laces could feature a boot-like rope design.

The entire sneaker will likely feature a nubuck upper in a monochromatic wheat hue. Though the Swooshes may diverge when it comes to the shade.

Also, expect a contrasting “Supreme” logo on the lateral heel. Gum rubber midsoles and outsoles are expected to complete the design.

You can buy these sneakers likely at select retailers, the official Supreme App, and Nike SNKRS. The expected release date is set for June according to rumors.

Expect resale to be decent, however, these AF1 Lows will also be very difficult to cop.

Using my estimated resell value, you can expect gross profits of around $100. That’s “Good’ according to our Hype Meter.