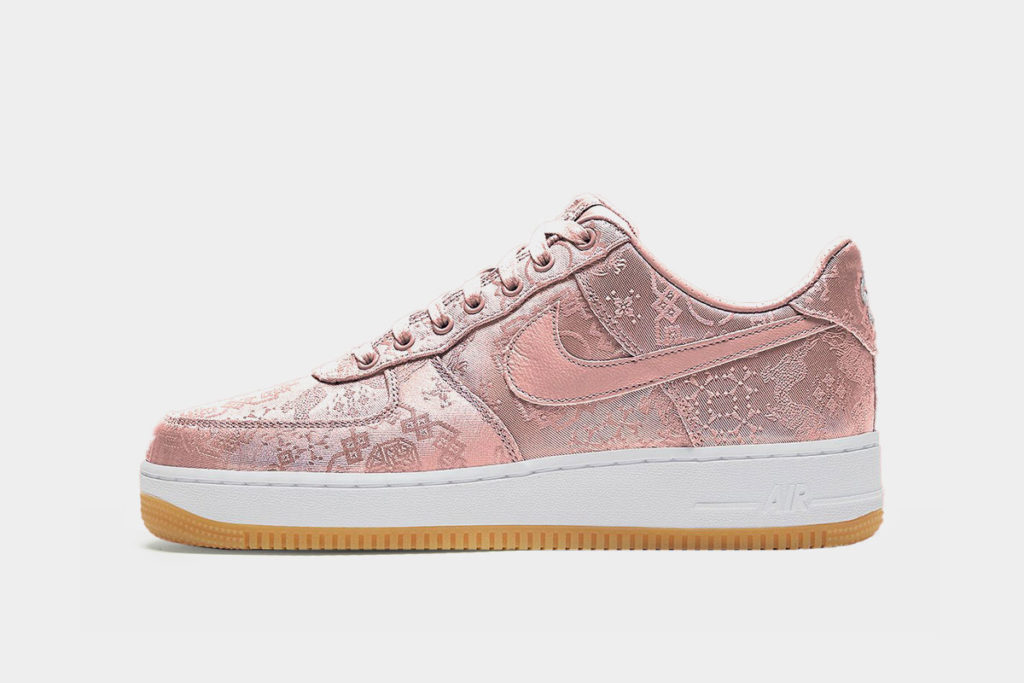 Edison Chen succeeded in shaking the plate tectonics of the sneaker world in 2019 with his Nike collaboration of the Fragments and Blue Silk, and now he’s looking to start the 2020 CLOT takeover.

The sneaker community has been increasingly impressed with the Chinese multiple layered shoe style, as Edison Chen blessed everyone with back to back releases of exotic and illustrious shoes in the year of 2019.

The new year of 2020 is being ushered in by a CLOT exclusive, but it isn’t the only shoe that’s making noise.

Following our Instagram would benefit anyone that wants to stay up to date, so if you haven’t yet, you’re sure to miss out.

Look for the new all rose gold colorway to release on January 11th, 2020 at the $250 price point in all adult sizing.

This shoe will be in high demand but limited quantities.

The rare collaboration will release in selected retailers:

All dates and times are subject to change.

Edison Chen’s CLOT releases have been creatively crafted, to say the least.

This rendition follows suit with his prior releases, however, it is still a shoe that is unlike anything else.

After releasing the black and blue editions, this sneaker is doused with a “Rose Gold” makeover and Chen’s signature Chinese design is the main event on another classic Nike pallette.

The upper constructions mimic its blue and black predecessors, however, this time the pink silky fabric leads the way.

In addition, the matching rose gold laces are featured in the shoe’s center, along with a consistent darker pink hue throughout Nike’s swoosh branding.

On the same branding token, the insoles are placed with “Nike Air” logo on top of Chen’s branding.

The shoe tongues are tucked in and suttle as the Nike Air Force 1s are, in a rose gold hue with “Nike Air” imprinted.

On the other hand, the heel collar features the “Nike Air” texts in all white. Finally, all the shoe elements sit atop a white midsole and gum outsole.

As we ring in the new year with another one-of-a-kind CLOT design, reviewing the 2019 CLOT superstars is mandatory.

First and foremost is the Royal Blue Silk color scheme that released on November 11, 2019.

The all-blue colorway features the same design as the imminent Rose Gold model.

Chen did not make any upgrades or alterations from this model to the Rose Gold release as it features the same Nike Air Force 1 palette and design.

Nonetheless, you can get lost in the deep Royal Blue hue that surrounds the shoe.

The CLOT Royal Blue Silk had a resale value of around $600 at first release, and although it has declined slightly, it is still doing excellent in the resale market.

Reason being, the units were limited, the style is one-of-a-kind, and on an iconic Nike Air Force 1 model.

With the release of the Rose Gold color scheme, the Royal Blue rendition will see a slight rise in resale value as is such the common resale behavior.

So if you bought this shoe for retail and decided to hold as to a “quick-flip”, a decent time to sell will be after the Rose Gold release.

This Edison Chen model on the popular Air Force 1 pallette has done even better than its blue counterpart in terms of resale value.

Before we dive into the resale price, it’s hard not to admire the characteristics of this shoe.

Not only does it boast the multi-layer texture that enhances the creativity that Edison Chen possesses, but it also features a versatile all-black structure.

With all-black laces, black upper, white midsole, all on a gum outsole, you can wear these shoes with almost anything.

In addition, the design and “pop” this edition features were instrumental towards its high resale price.

The average size 9 requires deep pockets, as it will require a grand to purchase.

Furthermore, unlike the Royal Blue edition, its resale price has only increased.

In my opinion, the collaboration with Jordan Brand on the Jordan 1 Mid exceeded all expectations.

Although it’s a Jordan 1 Mid and not a Jordan 1 High, the shoe was still heavily sought-out due to its brand name and elegant color scheme.

Nonetheless, the Nike Swoosh might have been the best takeaway, as it’s evident the threading was done with fine precision.

Finally, the outsoles resemble a deep red that serves as a perfect color-blocking to the upper construction of the shoe.

To reiterate, this collaboration was on a Jordan 1 Mid instead of the Jordan 1 High model, which could be why it did not do nearly as well as the Nike x CLOT Air Force 1 Black rendition.

Nonetheless, the resale price still sits roughly at a $500 value, thus, people that were able to acquire the pairs for retail made a profit.

With all that information rendered, the resale value of the Rose Gold edition can be estimated based on its color, shoe model, and stock.

It can be assumed that this shoe will have limited pairs as its predecessors, however, being a pink color could be detrimental towards its resale potential.

As a result, the shoe’s resale value should sit around $500 a week after its release.

Although the month of January has been dry, as they usually are, there is still some decent January sneaker heat yet to come.

Are you just starting the dive into reselling? If so, purchasing the Hypemaster Playbook is a must if you don’t want to sink.

For further updates and sneaker news, make sure to opt-in to our email list so you won’t miss out on any future shoes.

Robby is a sneaker fanatic with good experience in the reselling industry, but even more so in the sneaker community as he carries his passion with pride.
Search