Jordan Brand is all set to bring back one of its popular Japanese exclusive sneakers from 2001! The Air Jordan 1 High CO.JP “Midnight Navy” price is $170 and releases on November the 14th. Stick around to know all about this super-hyped sneaker!

This Multi-Billion Dollar market sees the release of many hyped sneakers that are highly profitable. You too can get a piece of this billion-dollar pie with the right knowledge, guidance, and minimal investment.

Read the Hypemaster Playbook for everything you need to know about sneaker reselling.

This Highly Reviewed, step-by-step guidebook will teach you all that you need to know about copping profitable sneakers.  In the end, you’ll have enough knowledge to build your very own booming resale business!

For free reselling education, sign up for our newsletter below. We release frequent content to keep readers updated about the hottest sneaker releases!

The Air Jordan 1 High CO.JP Midnight Navy is one of Jordan brand’s most anticipated fall releases. Before we take a closer look, let me walk you through some background information.

They were designed by Peter Moor in 1985 and were inspired by other OG Nike sneakers. The silhouette was mostly inspired by Nike’s first basketball sneaker, the Air Force 1.

It had a very similar collar, toe region, and tongue, however, the sole had to be narrowed down. Michael always said that he wanted to “Feel the court beneath his feet” so that’s what Peter made.

When presented with the Air Jordan 1, Michael hated how they looked and called them “Clown” like. Later on, they began to grow on Michael and he would wear them gladly to all his games.

Because of the story of MJ that’s associated with the Air Jordan 1, they’ve achieved legendary status. People started wearing them not only for basketball but also on the streets as fashion-wear.

Even today, most pairs sell out instantly while some resale for hundreds of dollars over their retail prices.

Jordan brand had this whole plan of releasing the super-desirable Japanese exclusive AJ1s from 2001 for the Tokyo Olympics. Then, of course, the Pandemic happened and the Tokyo games got postponed.

Luckily, Jordan brand is still left with a few fire-new sneakers that I’m sure many OG fans will love. Back in 2001, Jordan brand released brand new colorways for the first time ever. That’s partly why this pack is considered so important in sneaker culture today.

Even Erick Koston, the designer of the Air Jordan 1 Low x Nike SB sneakers, took these as inspiration for his masterpiece. These sneakers were also the first region exclusives and the first to feature a suitcase rather than traditional packaging.

The pack included 4 brand new colorways in extremely limited quantities. The Neutral Grey/Metallic Silver sneakers were limited to 2001 pairs. The black, white, and Midnight Navy were limited to only 3000 pairs.

To estimated resale for the Air Jordan 1 High CO.JP Midnight Navy, let’s head on over to StockX. Assessing similar sneakers can give us a good idea of what to expect.

Although not part of the 2001 Japan pack, the Air Jordan 1 High Bio Hack is inspired by the bustling city of lights that is Tokyo.

It features a multi-colored leather upper that is both dark and vibrant at the same time. Similar to the colorful streets of Tokyo at night, where neon lighting is present seemingly everywhere.

Black side panels and laces are contrasted by a white “Swoosh”. Brown overlay covers the collar and rear while teal covers the toe box and navy around the eye stays and toe region. Pink collar lining and a bright yellow throat stick out like neon street lights on a dark evening in Tokyo.

Not as subtle as the Air Jordan 1 High CO.JP Midnight Navy in color but the resale value might be similar.

This was the first time since 2001 that Jordan brand retroed this colorway. At the time, only 2001 colorways were released with special packaging that resembled a metallic silver suitcase.

The Air Jordan 1 High CO.JP Neutral Grey 2020 features a silver leather upper. Suede and metallic silver overlay on the rear and ‘Swoosh’ keep these sneakers true to the originals. The only deviation is found on the tongue where the 2001s Jump-Man is replaced with “Nike Air”.

A white midsole and grey outsole finishes off the design.

On StockX, the average selling price is $280 which is a gross profit of $110. At peak resale, gross profits are as high as $530. I believe the Air Jordan 1 High CO.JP Midnight Navy will have a very similar resale value.

The Neutral Grey colorway was complimented with special packaging same as the sneakers from 2001. Although this features the same sneaker mentioned prior, the suitcase makes it significantly more valuable.

On StockX, the average selling price is currently at a whopping $1,000 per pair. At peak resale prices, gross profits are as high as $1,800.

I expect the Air Jordan 1 High CO.JP Midnight Navy to have a similar but slightly lower resale value.

These sneakers are inspired by the original “Midnight Navy” Air Jordan 1s which released in very limited quantities (3000 pairs). The 2020 versions were originally planned to release in celebration of the Tokyo games.

Unfortunately, the Tokyo games have been postponed while the release of the Midnight Navy AJ1 is still going forward.

It features a white leather upper with dark navy overlay on the toe region, eye stays, rear, and collar. Navy also covers the insoles with a white “CO.JP” written inside. A metallic silver ‘Swoosh’ covers the lateral sides and sits underneath a metallic silver “Air Jordan” logo.

A white midsole and navy outsole finish off the design. 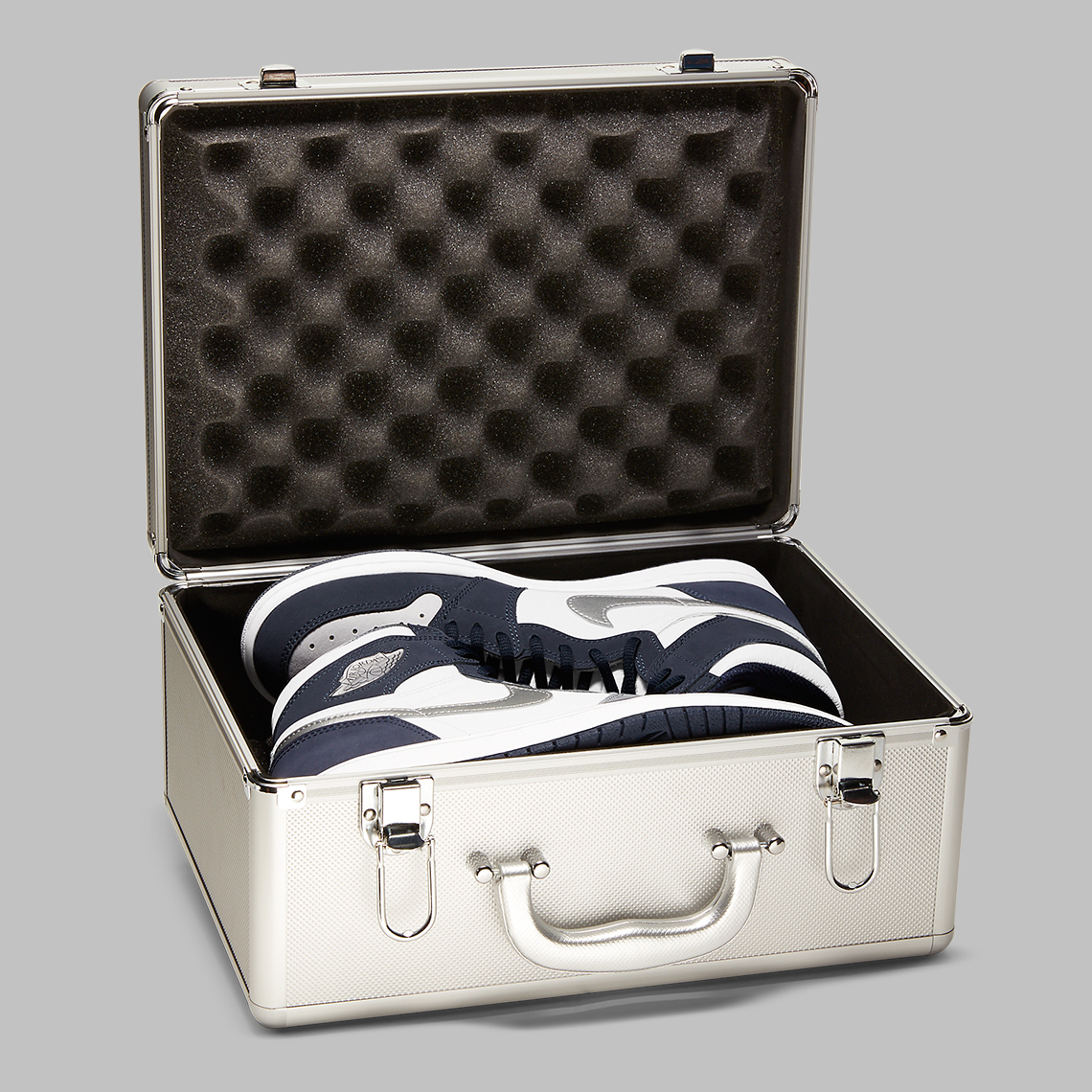 I expect these to sell out very fast, similar to the last colorways that dropped recently. Copping these won’t be easy but don’t worry!

Join our exclusive Winner’s Circle to help you cop the most profitable sneakers. You’ll be given valuable insider knowledge which can help in copping multiple pairs of hyped sneakers.

Using my estimated resell value, selling the Midnight Navy AJ1 can earn you profits of around $330 with the suitcase and $80 per pair without it.

You can buy these sneakers for a retail price of $170 at select retailers and Nike SNKRS. They’ll be available on November the 14th.

You can also buy them at reseller websites such as StockX today.