Trophy Room is all set to team-up with Jordan Brand on a retro colorway for all you Chicago fans out there! The Trophy Room x Air Jordan 1 High OG SP “Chicago” price is $170 and is set to release on March the 31st 2021. Keep reading to know all about it!

Similarly hyped sneakers are common in this Multi-Billion Dollar Market. You can actually make thousands every month with the right knowledge and guidance. For that, I highly recommend reading the Hypemaster Playbook.

This Highly reviewed guidebook will teach you everything you need to know in a step-by-step fashion. There’s really nothing else out there like it! For free reselling tips and more, sign up for our newsletter below!

We drop content frequently about the release, resale guides, and much more!

The Trophy Room x Air Jordan 1 High OG SP Chicago is a highly anticipated release with potentially very lucrative resale. Before we estimate its resale, let me walk you through some background info.

Air Jordan 1 Retro| The One That Started It All

Designed by Peter Moor in 1985, the Air Jordan 1 was crafted specifically for the needs of the Chicago Bulls’ star, Michael Jordan.

It all started with a young Michael Jordan during his rise to fame as a rookie. He was approached by Nike that promised to build a brand around him but surprisingly, he declined.

He actually preferred the Converse Chuck Taylor rather than Nike sneakers. Claiming that “the soles were too thick” as it didn’t let him feel the court beneath him.

Finally, MJ received the Air Jordan 1 and even then, he hated it. Said they Looked “Clown” like. Gradually, however, it started to grow on him and he ended up enjoying playing in the AJ1 every time.

Today, the Air Jordan 1 has transcended sports and has become a fashion/street-wear icon. Some limited variants sell for thousands of dollars over their retail prices on reseller markets.

The latest Trophy Room Air Jordan 1 is also expected to have very a resale value. 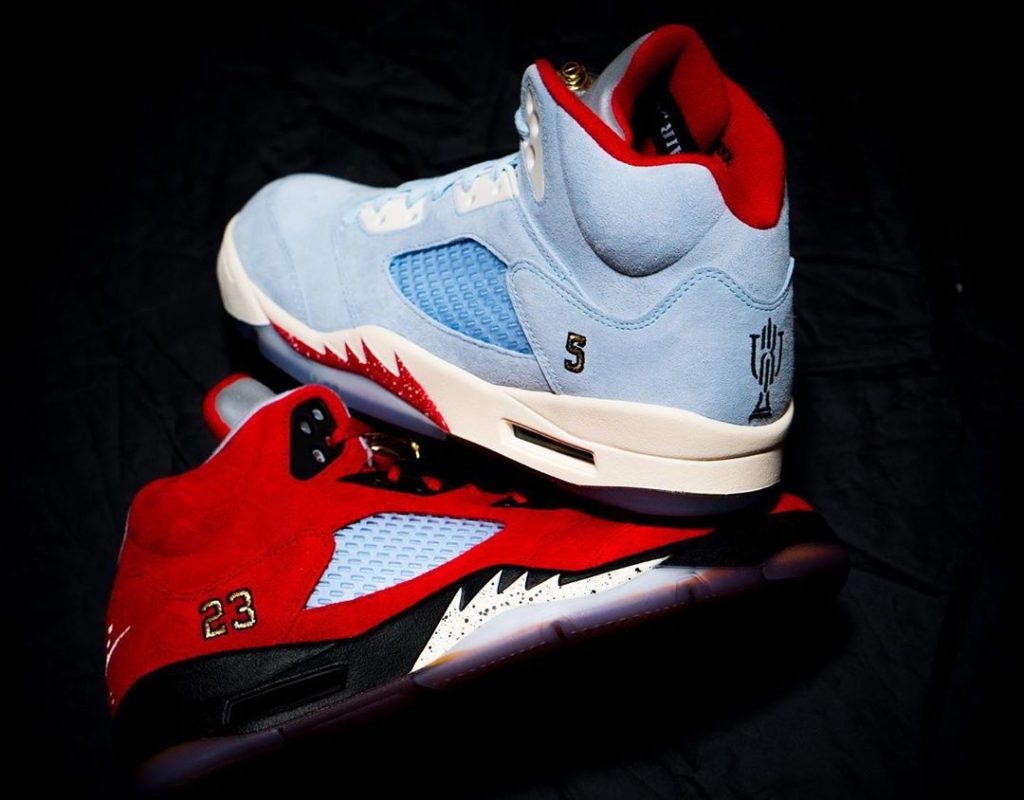 In an interview with CNBC, Marcus stated that he had high hopes for his boutique. He took inspiration from his father’s success and with his advice, aims to achieve great things.

The Trophy Room x Air Jordan 1 High OG SP Chicago is perhaps his most anticipated sneaker releases. To estimate its resale value, let’s head on over to StockX.

The Air Jordan 23 Trophy Room is designed by MJ’s son, Marcus, and released exclusively at his boutique in Orlando, Florida. The Trophy Room Air Jordan 23 came in 2 colorways and in extremely limited quantities.

With only 523 sneakers in existence, each of these Air Jordan 23s is individually numbered. They’re also specially embroidered all over the upper with “MJ”.

These sneakers also feature a gold midsole, golden “HEIR” behind the tongues, and Trophy Room branding on the translucent outsole. This luxurious sneaker retailed for $275 and sold out instantly.

The average selling price on StockX is currently $830 per pair which is a gross profit of $555. At peak resale prices, gross profits are as high as $800 per pair. I believe the Trophy Room x Air Jordan 1 High OG SP Chicago will have even higher resale prices.

This Air Jordan 5 released back in mid-2019, along with another colorway, and set the sneaker world ablaze. These kicks are highly sought after and released in extremely limited quantities.

They feature a vibrant University Red upper with ice blue side panels, black eye stays, and a golden “23” on the heel. A black midsole with a Sail blaze pattern and translucent outsole finish off the design.

Although the Trophy Room Air Jordan 5 Ice Blue is less popular among the two, it’s still highly anticipated and extremely difficult to get your hands on.

This AJV features a cool Ice Blue upper with University Red hits on the collar lining and midsole. The white eye stays match the white midsole while a translucent outsole completes the design.

On StockX, the average selling price is $1,100 which is a gross profit of around $900. Peak resale prices yield gross profits of up to $1,800. I believe the Trophy Room x Air Jordan 1 High OG SP Chicago will have a slightly higher resale value.

UPDATE: The release date has been delayed until further notice (Likely 2021)

After releasing his own take on the Air Jordan 5, 17, and 23. Marcus Jordan is all set to release his own version of his father’s legendary Air Jordan 1 Chicago.

The sneakers look similar to the originals, sporting a white, red, and black upper with a few but significant tweaks to the aesthetics. The red overlay sparkles, while the stitching used, is white instead of red which provides a subtle contrast.

An interesting detail appears on the side of the heels, with Michael Jordan’s signature superimposed on it. Co-branding is also featured on the insoles.

Also featured is a yellow outsole, possibly hinting at the age of the Air Jordan 1’s design. Finally, a translucent outsole with blue and red stars completes the design.

Take a close look via these detailed images.

People are known to have flown out to Orlando just to cop a pair of Trophy Room x Jordan sneakers. I guess it’s safe to say that these will sell out instantly.

Winning a chance to buy sneakers like these are pretty much equivalent to winning the lottery. To significantly improve your chances, I highly recommend joining our exclusive Winner’s Circle. You’ll be given valuable insider knowledge to help you cop the most profitable shoes!

Using my estimated resell value of $2,000, you can expect gross profits of over $1,800. I’d take that with a grain of salt however, as judging by previous Trophy Room x Jordan Sneakers, the popular shoes can sell for up to $5,000.

You can buy these super limited sneakers exclusively at Trophy Room In-Store and Online. They’re set to release on November 11th for $170.

Update: The release date has been moved likely to 2021.

You can also buy them at reseller websites such as StockX.

Where to Buy: (Retail) Trophy Room