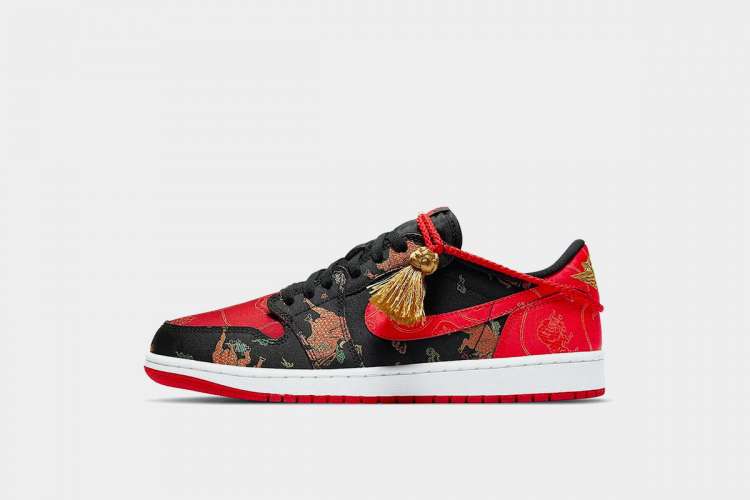 Nike continues its trend of commemorating the Chinese New Year and for 2021, they’re set to release yet another Air Jordan 1 Low! The Air Jordan 1 Low “Chinese New Year” 2021 release date is on January 31st with a retail price of $130 per pair. Stay tuned as we take a detailed look and estimate its resale value!

We’re only halfway through January and there are still plenty of profitable drops yet to come. Check out our top picks for January 2021’s best sneakers to resell!

For more resale and release guides, sign up for our newsletter below.

Before we take a detailed look at the 2021 Nike Air Jordan 1 Low Chinese New Year, let me walk you through some background info!

For summarized information skip to the conclusion.

They were designed by Peter Moor in 1985 and were inspired by other OG Nike sneakers. The silhouette was mostly inspired by Nike’s first basketball sneaker, the Air Force 1.

It had a very similar collar, toe region, and tongue, however, the sole had to be narrowed down. Michael always said that he wanted to “Feel the court beneath his feet” so that’s what Peter made.

When presented with the Air Jordan 1, Michael hated how they looked and called them “Clown-like”. Later on, they began to grow on Michael and he would wear them gladly to all his games.

Because of the story of MJ that’s associated with the Air Jordan 1, they’ve achieved legendary status. Apart from retro colorways, various collaborations such as The Trophy Room x Air Jordan 1 and region exclusives such as the CO.JP Midnight Navy have kept this silhouette exciting and timeless.

With so many releases every year, a few notable sneakers are enshrined in the minds of fans forever. The AJ1 CNY 2021 is definitely a contender for being one of those sneakers.

The Chinese New Year or “Lunar New Year” is a huge celebration that occurs within Chinese communities everywhere. This occasion brings families and friends together as they enjoy food, festivals, and parties.

It starts with the new moon which according to western Calenders, starts around January 21st and ends at around February 20th. The Chinese New Year is perhaps the most important celebration in Chinese culture and Nike often celebrates with them.

To estimate resale for the Air Jordan 1 Low OG Chinese New Year, let’s head over to StockX. Assessing similar sneakers can give us a good idea of what to expect.

This Air Force 1 Low features an upper that’s embellished in a profusion of colors and Chinese-inspired embroidery. Light orange patterns are featured along the toe region with textured red at the rear and intricate colorful patterns on the side panels.

The black eye stays and heel tabs provide a star contrast while clean white midsoles and outsoles complete the look.

On StockX, the average selling price is $146 which isn’t great. However, these sneakers were still quite popular when they released but I believe the Air Jordan 1 Low Chinese New Year will have a much higher resale value.

This Air Jordan 6 sneaker features an almost fully black-out upper with perforations on the side panels. Floral patterns cover most of the sneaker with a vibrant red rose along with white rose embroidery at the rear.

The midsole includes golden hits while the rest of it features black and white color tones similar to the outsole.

The average selling price on reseller’s markets is currently around $300 which is an average gross profit of $50. At peak resale prices, they’ve even been sold for as high as $550. Though resale is mediocre. I believe the Air Jordan 1 Low Chinese New Year will have higher profits since it’s a more popular colorway.

Similar to the 2021 version, this AJ1 low-top released on the 31st of January in celebration of the Chinese New Year. However, these kicks were only limited to a few thousand pairs making them even more sought after by collectors and resellers alike.

It features a multi-colored upper with roses on the toe box and white “Air Jordan” branding on the sides. On the heel tabs, similar branding appears in black which sits atop a textured white rear. To finish off the look these sneakers feature white midsoles and black outsoles.

Since these are so limited, their resale value is pretty high with the average selling price being $390. That’s over $200 in profits per pair! The 2021 versions may have similar resale values.

As we enter the year of the Ox, Nike release a new Air Jordan 1 which dons a classic “Bred” colorway with golden hits for a touch of luxury mixed with Chinese-inspired embroidery.

Some of that embroidery depicts a flower while others take the form of an Ox which is the Zodiac of 2021.

Inside, a bright University Red covers most of the sneakers with dark “Nike Air” branding. The only part devoid of contrasting patterns is the clean white midsoles and red outsoles.

Although this colorway already drips opulence, a red lace around the collar which ends with a golden tassel provides the finishing touch to this lux new Air Jordan 1.

Although there’s not much information about whether these will be as limited as the 2020 versions. You can still expect these kicks to sell out fast.

Using my estimated resell value of at least $300, expect gross profits of around $170 or more. On StockX, bids have been going crazy as some are as high as $800. Thus these sneakers should definitely be on anyone’s must-cop list.

You can buy these sneakers at select retailers and Nike SNKRS on January 31st. The retail price tag is set at $130 per pair for men. These will be extremely difficult to cop so I suggest joining our exclusive Winner’s Circle to help you out!

In other Nike news, the Swoosh is set to release the Air Jordan 4 Starfish and Supreme Nike SB Dunk Low later this month!