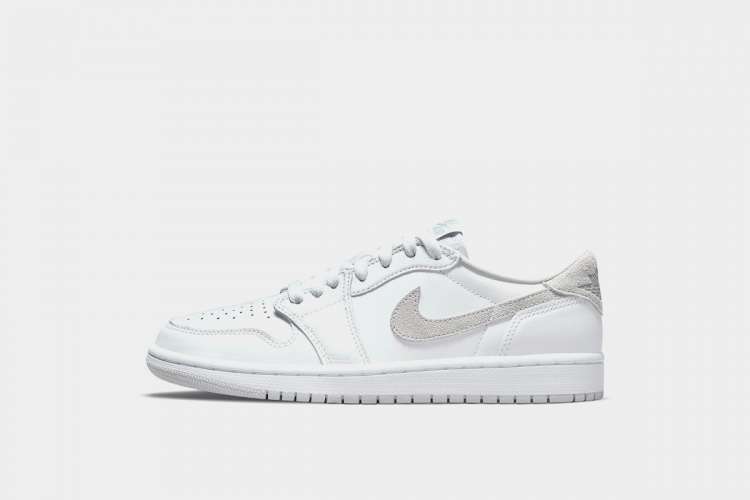 Stay tuned as we dive in for a detailed look!

The Air Jordan 1 has remained a fan favorite for decades which is largely thanks to its unending array of colorways. One of the most memorable being the “Neutral Grey”.

Before we estimate resale for the Air Jordan 1 Low OG Neutral Grey. Let me walk you through its history.

In 1985, Nike made one of the best decisions they’ve ever made by signing Michael Jordan as their signature athlete.

At first, MJ was reluctant to join Nike as he actually didn’t like their shoes. He claimed that the soles on Nike sneakers were too thick which did not let him feel the court beneath his feet.

Jordan spent most of his early basketball days wearing his favorite Converse All-Star Highs. A sneaker that he wore to most of his games during his time at the University of North Carolina. Michael also wore them to the 1984 Olympics, just a year before he signed with Nike.

Then after being convinced by his mother to agree to the Nike deal, Michael received his very first signature sneaker, the famed Air Jordan 1 in the iconic “Chicago” colorway.

Designed by Peter Moore, these sneakers took design elements from the Air Force 1 and the Terminator, however, trimmed down the soles, as preferred by Michael.

When presented to MJ, he disparagingly called them “Clown”-like, however, learned to like them as time went by.

The rise in popularity and dominance of Michael Jordan was reciprocated by his signature Jordan 1 shoes. While MJ dominated the basketball courts, the Jordan 1s rapidly rose to become the most popular basketball sneakers on the market.

Eventually, transcending the sports world and becoming solid fashion statements on the streets.

The Air Jordan 1 Neutral Grey was one of the first colorways and is highly sought-after by collectors today. Although we saw a recent retro of the high-tops that resold for high profits, the Air Jordan 1 Low OG Neutral Grey will also definitely have some fans very excited.

But are the low-tops worth reselling in 2021?

The Air Jordan 1 Highs have always been the most popular Air Jordans. Always selling out within minutes if not seconds every time there’s a new release.

The mid-tops and low-tops however, aren’t as hyped but still very popular and growing in popularity. Research by GQ showed that since people can’t get their hands on the High-Tops anymore, they’re settling for mid-tops which used to be the least popular.

This dynamic shift may cause a decline in demand for Air Jordan 1 lows as demand for mid-tops gradually increases. For men, there’s a 200% increase in sales while it’s over 1000% for women since 2019.

The low-tops, on the other hand, aren’t nearly trending as much. On the other hand, most releases are still profitable but resellers have to be careful and do their research as AJ1 lows can just as easily brick.

To estimate resale for the Air Jordan 1 Low OG Neutral Grey 2021, let’s head over to the secondary markets.

Uppers consist of smooth white leather on the side panels, throats, and toe boxes while Neutral grey covers the scuff guards and heel tabs.

Grey textile covers the collars and tongues that sit above traditional white laces. The highlights of these shoes are the grey Swooshes and lower eye stays that are embellished by Elephant Prints.

On the secondary markets, you can buy these kicks for around $240 which is over $100 in gross profits for resellers. The Air Jordan 1 Low OG Neutral Grey will likely have a higher resale value.

The Air Jordan 1 Black Toe or “Atmosphere” is yet another hit by Jordan Brand.

Predominantly consisting of leather construction, this colorway features 3 color tones that do well to complement each other. White shaded side panels provide a clean base that’s contrasted by black leather Swooshes, eye stays, and scuff guards.

You can buy these sneakers for around $350 which is a decent $240 gross profit per pair.

The Air Jordan 1 Low Neutral Grey dropped back in March of 2015.

The collars and the tongues feature white leather; the latter being contrasted by grey Jump-Man branding. Thick white midsoles and grey outsoles complete the design.

The average selling price for these sneakers has sky-rocketed ever since being released in 2015. From being sold to almost under retail to over $600 per pair currently. The Air Jordan 1 Low OG Neutral Grey will likely have a lower resale value since it’s a soft retro.

This low-top, however, deviates from its predecessors by rocking buttery suede overlays in the titular Neutral Grey color tones. However, they only appear sparsely on the lateral side Swooshes and heel tabs that are embroidered with Jordan Wings logos.

Particle Grey color tones are featured onto the tongues that wear matching “Air Jordan” branding. The likes of which also appear on the white footbeds.

Underfoot, midsoles are kept traditional with clean white shades while grey outsoles finish off the design.

You can buy these sneakers at select Jordan Brand stockists and Nike SNKRS. The retail price for men’s sizes is set at $130 per pair.

Just as their high-top counterparts, I believe these Jordan 1 Lows will sell out within minutes.

I wouldn’t expect the resale value to emulate that of the High-Top Jordan 1 Neutral Greys but good profits are still very likely. Using my estimated resell value, expect gross profits of around $180 per pair. That’s “Good” according to our Hype Meter.