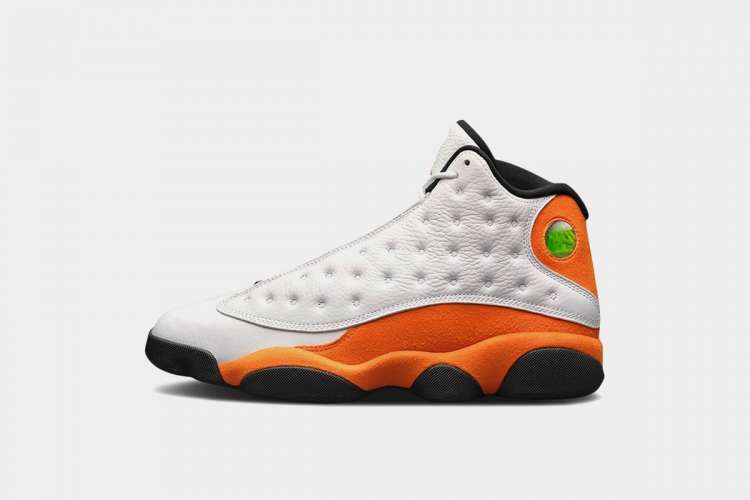 Jordan Brand continues its trend of retro classic releases as we head into the New Year with a citrusy new Air Jordan 13! The Air Jordan 13 “Starfish Orange” Release Date is set for January 2nd with a retail price of $190. Keep reading to know all about this hyped new Jordan sneaker!

Before we estimate the resale value of the Air Jordan 13 “Starfish Orange”. Let me walk you through the history of this legendary sneaker.

He wouldn’t just rush in, try to snatch the ball and score just with his pure athleticism. He would wait, patiently, for the precise moment to pounce. Just as a Panther would do during a hunt.

Interestingly enough, what Hatfield didn’t was MJ’s teammates had already nicknamed him “Black Cat”. Thus, the idea became even more fitting for the Air Jordan 13.

This sneaker has one of the most unique designs of any Air Jordan. If you’ve ever owned a pair, I suggest taking a closer look at the sole as it resembles a panther’s paw. That’s not a coincidence though, it was done by design.

The Air Jordan 13 released in 1997 near the end of Michael Jordan’s career. It has various colorways and reiterations that continue on to this day. Recently, we’ve seen the Air Jordan 13 Lucky Green and Air Jordan 13 Black Metallic Gold which were fairly profitable.

To estimate resale for the “Starfish” sneaker, let’s head over to StockX.

The Air Jordan 13 Retro Chicago features the Bulls’ iconic red and white color tones. White leather covers most of the upper while a True Red overlay covers the midsole and rear that’s encrusted with the iconic hologram. A black outsole completes the look.

The average selling price is $275 per pair which is an average gross profit of $85. They’ve also been sold for as high as $600 thus making them very profitable. I believe the Air Jordan 13 “Starfish Orange” will have a similar but slightly lower resale value.

This Retro colorway has recently received a lot of love from Jordan Brand with a few implementations in the past such as the Air Jordan 1, 4, and even an Air Max.

The Upper features Air Jordan 13’s signature white quilted upper that distinguishes itself from the smoother material on the throat and toe box. Starfish Orange suede overlay on the sides and midsole provide a contrasting effect. The iconic holograph is also featured on the rear and on the midsole.

Meanwhile, a black, white, and orange midsole that resembles a panther paw completes the design.

I believe these sneakers will sell out fast with some guaranteed small profits on whatever size you can cop. These will likely be difficult to cop as well.

Using my estimated resell value of $230, expect gross profits of around $40 per pair. Profits may also be higher as they’ve already been sold for over $500 on StockX.

You can buy these sneakers at select retailers and Nike SNKRS on a set release date of January 2nd. The retail price is confirmed at $190 for men and it will release in full family sizing.

You can also buy them today on StockX.

Also, join our exclusive Winner’s Circle for valuable insider knowledge! For more content such as this, sign up for our newsletter below.

In other news, Nike has recently released the Air Jordan 13, Hyper Royal, check it out!