This time, Jordan Brand looks to completely revamp one of their more popular models: The Jordan 3.

Slated for a December 2019 release date, the Nike Jordan 3 Retro will undergo a primitive evolution, resulting into the Air Jordan 3 “Animal Instinct.”

December includes a long list of limited sneaker releases that most of the Six Figure Sneakerhead community have been capitalizing on.

You can also obtain profitable sneakers by following our Instagram and being notified in real-time.

The sneaker is releasing with just the mens size, so make sure you purchase only money sizes. If you’re a novice and that means nothing to you, consider our best-selling sneaker-reselling product, Hypemaster Playbook.

For those of you who have been reselling sneakers for a substantial amount of time, the Jordan 3 “Animal Instinct” will release at the usual locations.

For the full sitelist and live links, you can check out our private group–check this page to see if it’s in stock today.

THE HISTORY OF THE jordan 3

Before we articulate why this particular Animal rendition of the Jordan 3 will warrant long lines and stocks being sold in seconds, diving into the history of the Jordan 3 is essential.

The aforementioned hype for the sneaker started well before online sneaker exchange giants like Stockx or Goat.

In the year 1988 the Air Jordan 3 was first released and it was designed by non other than the legend himself, Tinker Hatfield.

Tinker Hatfield is a pioneer of Jordan Brand and if you have been in the sneaker world for even a modicum of time, you’re bound to have heard of the legend.

The Air Jordan 3, Tinker Hatfield of course, introduced the world to a graphic that has been a trademark of the sneaker-giant: The jumpman logo.

In addition, the third line debuted the ever-popular elephant print on the upper construction. The four colorways that released in 1988 are classics today that will be retrod forever.

Michael Jordan, who doesn’t need an introduction, retired for the first time in 1993. Following soon after in 1993, the opportunistic Jordan Brand released a line of Jordan 3 retros in 1994.

A decade later, entering the new mellenium, featured the first Air Jordan 3 Retro with various other colorways. The OG black and cement colorway was included in the package, and unfortunately the original “Nike Air” imprint on the heel collar of these would not return.

In addition, the “True Blue” colorway in 2001 featured the all-too-common Jumpman branding on the rear.

In the modern age, we have seen various retro drops that were heavily sought-after.

In 2018 we were blessed with the favorites, being the Air Jordan 3 White Cement and Black Cement colorways.

Although Michael Jordan first wore the Tinkerfield-designed shoe in 1987, the shoe is still ubiquitous by thousands of sneaker enthusisats alike.

Simply calling this shoe abstract or unique just doesn’t do it justice; The shoe looks like it can completely come to life and snatch your dinner if you’re not looking.

The shoe is given the name “Animal Instinct”, however attention to detail instincts was how the production of the shoe came to fruition. 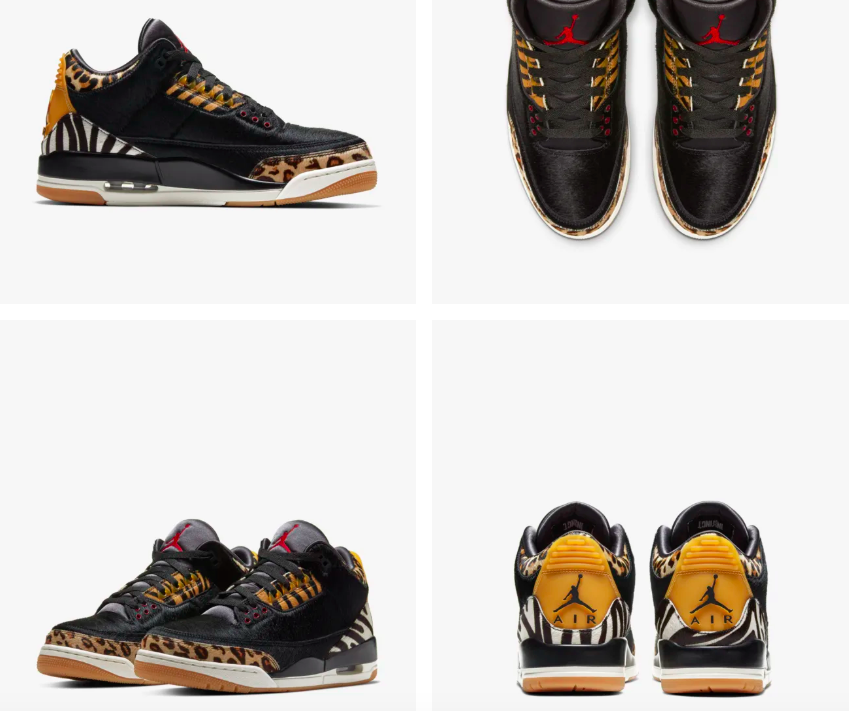 The shoe is encompassed with various faux animal patterns throughout the sneaker, in spots one wouldn’t imagine that confound detailing could exist.

Starting at the eyelets and shoelace intersection is a tiger-like outerlay that is sure to compliment any robust outfit.

In areas where the Air Jordan 3 was first doused with elephant print now has an appropriate zebra print alternative. Meanwhile, the toe and mudguard of the shoe features an elegant leapord print.

How can leapord print, zebra print, and tiger print be puzzled together you may ask? Bringing it all together in the quarter panel is the premium pony hair that one may find on black panthers. 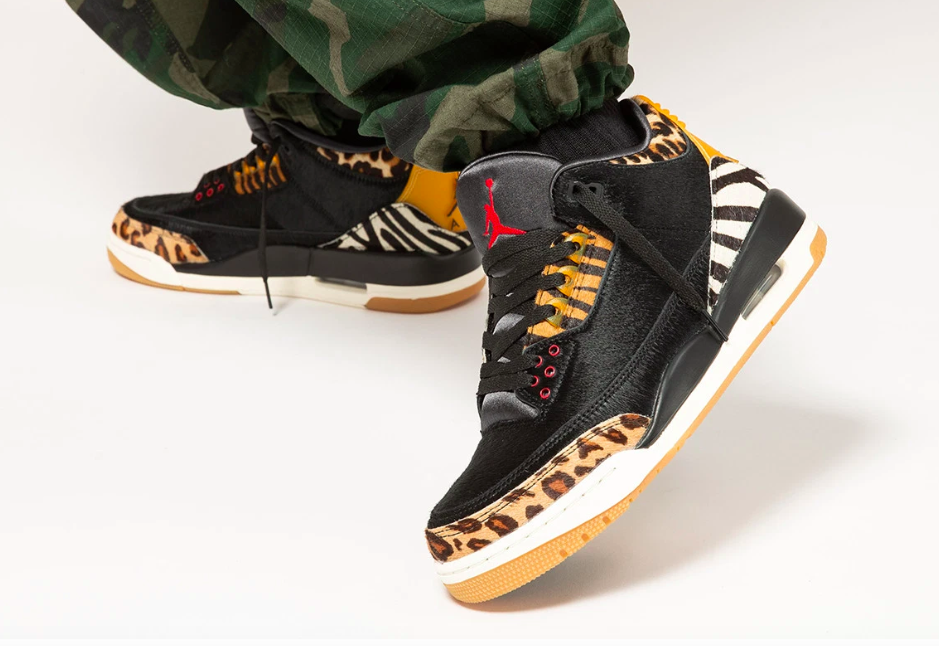 The shoe is complete with a gum rubber bottom outsole underneath the air-encompassed white midsole.

As we start on the price forecast of the safari-esque sneakers, an evaluation of another popular Air Jordan 3 will be established, the classic Jordan 3 Cement that was released in 2018.

The Jordan 3 Retro Black Cement is unanimously the most popular Air Jordan 3 model, as it is critically acclaimed.

Profiting off of sneaker investments isn’t always typical and takes a good eye and education, however the Jordan 3 Black Cement were a general release with much more pairs available than its Jordan 3 “Animal Instinct” counterpart.

It’s also worth taking a look at these Atmos Animal themed models, which have a very similar vibe and have resale value in the $300-$800 level.

So, with an article that details locations to buy, ways in which to buy, locations toward selling, and how to sell, the climax should be what the resale price is, right?

To do so, the sneaker exchange giant Stockx will provide robust information regarding the current monetary value of the Jordan 3 “Animal Instinct.”

Evidentally, the money sizes will be all of them:

The sneaker is set to flip for slightly higher than the OG Black Cement colorway, at $225.

What size should I buy if I want to flip?

Since resale is over $350 with some sizes, individuals may seek profit on any size.

If you have the chance at acquiring more than one pair, all the data and analysis suggest to do just that–these are advanced techniques that we cover in the Hypemaster Playbook.

The Air Jordan 3 “Animal Instinct” model will release in limited fashion so it’s advised to keep up with our Instagram page and opt in to our email list for maximum opportunities.

We are already halfway through this month that has been engulfed with various hyped sneakers, but in case you’ve been sleeping under a rock there is still more to come.

Check out our December’s list of the most profitable releases to view what’s left.

Good luck to everyone this week.