The newest performance basketball shoe from Jordan Brand has been unveiled and will be here soon – the Jordan 34. Like every year, the newest iteration of the numbered Jordan line has a substantial amount of tech to speak on. We’ll break down everything you need to know – the tech, how it stacks up, Jordan Brand as a whole, if it will resell, and when/where to get them.

Feel free to scroll to the “Release Info” section if you’re already an expert on the AJ34.

The Predecessor, the Jordan 33

First, we have to go back to actually move forward. The Jordan 33 took a bold and futuristic form. According to RunRepeat.com, a trusted performance sneaker rating site, it was rated the lowest in the numbered Jordan line from 27-32. That’s saying all 6 of the previous consecutive flagship Jordan shoes had better performance reviews from the public.

Most of the dismay is attributed to the weight/bulkiness, the materials, the break-in period, as well as the FastFit lacing system which seemed to be finicky. All of these facets are expected to be minimized on the Jordan 34.

The Jordan 34 seems to be completely different than the past few models and it is setting the stage for a new look at the longest lasting signature shoe line in the sneaker game.
Juxtaposing the AJ33, right away we’ll dig into why this shoe should garner some attention.
Jordan Brand touts that the 34 is the lightest basketball shoe they have ever put out. It’s weighing in at 13.1 ounces.
To put into perspective, a majority of the latest Jordan’s have weighed around 15.6-16 ounces. Part of the weight reduction comes from the materials on the upper.
While the signature line tends to focus on premium materials, this time they’ve taken the route of performance wraps and weaves for stability and lockdown.
Another surprise is that they’ve abandoned the FastFit lacing system. It seemed like this was a system that Nike minds really adored but after much review, they decided to move away from it on the 34. It’s speculated that the system wouldn’t mesh well with this tech setup.
For traction, the outsole features a herringbone pattern which many ballers find extremely advantageous. This aggressive construction should let the AJ34 do well indoors and outdoors without worry of any mix-use on the sole.
Another component of the weight reduction is the midsole, which is hollowed out. In the midsole, Jordan Brand is using what they call the Eclipse Plate. The brand is saying it’s an evolution of the Flight Plate. The Flight Plate was introduced a few years ago and was revered by basketballers. The new Eclipse Plate (which is actually two plates) is designed for smoother transition from the mid foot to forefoot. Two Zoom Air pods in the heel and forefoot will get a big thumbs up for the impact protection.

Where the Brand is Moving:

The Air Jordan 34 is the biggest change we have seen to the Air Jordan signature line in a very long time. After research on brand, this is the upcoming signature shoe that rookie Zion Williamson and veteran Blake Griffin will wear during this nearing NBA basketball season. Here’s a shot at Zion in the 34’s on Jordan’s latest promo video. 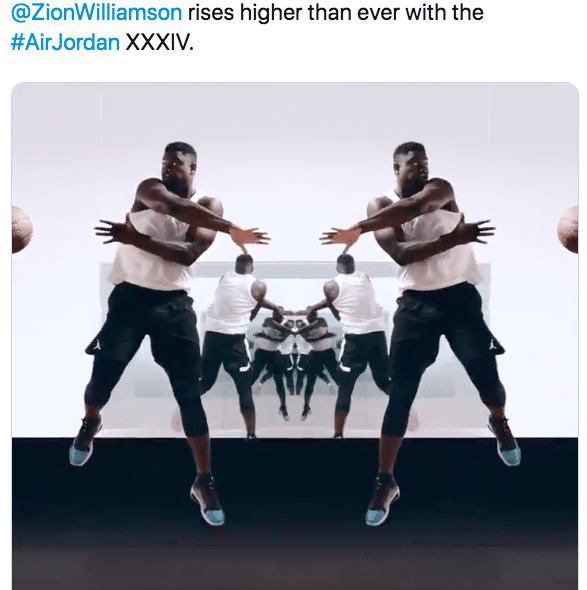 Instant impact.@ZionWilliamson rises higher than ever with the #AirJordan XXXIV. pic.twitter.com/kSNH5jIud9

As previously mentioned, the Jordan Brand has been making the right choices. This relates to design, price points, and campaign roll outs. They’re paying attention to buyer feedback and building what they want while still moving forward technologically speaking.

As most would expect and have seen in recent years, performance basketball sneakers have not been gathering much attention in the resale market. What’s reselling well now?

Right now, the AJ34 has none of that, and that’s okay.

While this initial “Blue Void” colorway may not resell for much more than retail, I wouldn’t be surprised to see JB pull something out of their sleeves and drop a few hyped iterations or themed releases. For example, we got a Travis Scott Jordan 33 last year. As always, we’re almost guaranteed to see a Chinese New Year themed shoe as well as team exclusives like Michigan, UNC, etc. which could be where the money’s at.

There’s already several more colorways to be released – a “Bulls”, “Eclipse”, “Snow Leopard” and “Amber Rise”. Stay locked here and we’ll let you know any opportunities in the future.

This addition to the Air Jordan signature line feels like a winner. They’re focusing on making a lighter, more versatile basketball shoe which I’m all for. They’re going for the approach of  “everything you need, and nothing you don’t”. We can get the feeling they’ve listened to consumers which is also something comforting that JB can hang their hat on – everyone likes a good listener. As for me, a very casual outdoor hooper, I would enjoy getting to kick around in these. At the very least I’ll go in-store to try them on to get a feel for the sizing.

The debut colorway for the Air Jordan 34 is dubbed the Blue Void. 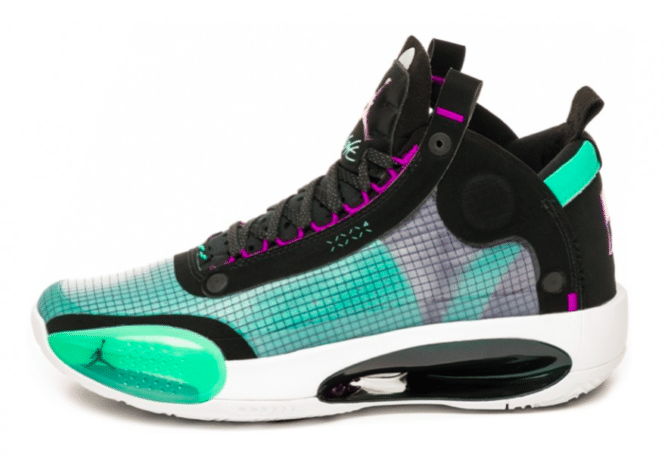 Time: 10AM, in stores and online

As always, thank you for reading, it’s much appreciated. Let me know if you plan on picking up a pair of the Air Jordan 34’s. If not, I’d love to hear what your favorite hoop shoe is.