Discover the Air Jordan 4 Retro White Oreo, its release details, estimated resale value, and tips on how to buy for retail price. 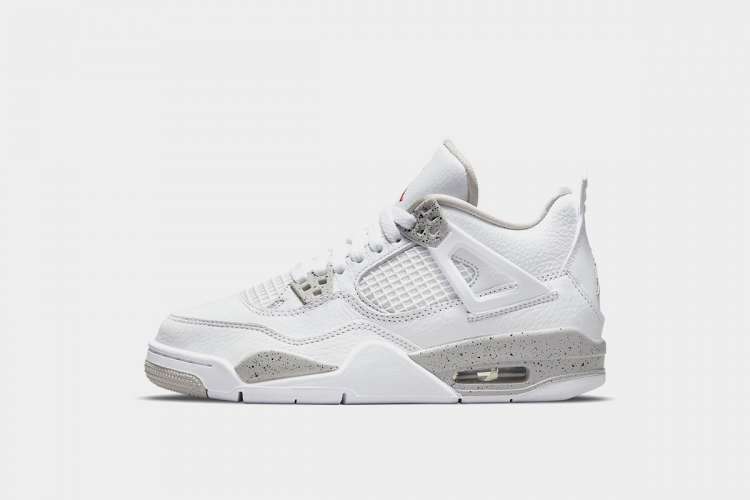 Jordan Brand reimagines the famed “Oreo” colorway for the Air Jordan 4 with an almost all-white upper. The Air Jordan 4 Retro “White Oreo” release date is on Saturday, July 3rd, 2021 for a retail price of $190 for men’s sizes. Stay tuned for all the details!

April is now past us and treated us with some great drops, May is already set to be just as profitable if not even better. Read more about it here!

The Jordan 4 has had a busy 2020 with an array of hyped releases. A trend that seems to be consistent in 2021 as well with various releases that are still yet to come.

Before we estimate resale for the Air Jordan 4 Retro White Oreo. Let me walk you through its history!

After creating the highly revered Air Jordan 3 that many believe to be Michael Jordan’s favorite, Tinker Hatfield had a great task ahead of him to create a silhouette that could emulate the iconic AJ3.

This time, Hatfield aimed at achieving a more performance-focused sneaker. Thus he changed up a few things starting with the shape of the sneakers.

When designing these shoes, the body is dipped in softened plastic before the air is blown through for a cleaner look. The air would blow away any residual plastic, polishing all the components and giving off a high-quality feel.

Moreover, these sneakers also feature an over-molded mesh, something that wasn’t as common at the time.

Michael Jordan’s 4th signature sneaker was released in 1989. Releasing in a total of 4 colorways throughout the year. Two colorways featured the typical Chicago Bulls color (White/Cement and “Fire Red), one featured a Bred colorway, and lastly, a White Blue model (Military Blue).

They retailed for a whopping price tag of $100, making them the most expensive basketball shoes at the time. Fortunately for Jordan Brand, the AJ3 had amassed such a large following that it was justifiable and people gladly paid.

Our Hypemaster Playbook deems these shoes worthy of a decent “Flip Score”. What that means is that the AJ4s are on average, profitable sneakers that are worth copping for resale.

In 2020, Jordan Brand released a wide selection of Jordan 4s in a plethora of color options. Including some very hyped retro colorways such as the Air Jordan 4 Retro Fire Red.

To keep things fresh and the hype alive, Jordan Brand released huge collaborations with other companies and dropped some heat such as the highly sought-after Off-White Air Jordan 4 Sail.

There were also other super-limited AJ4s such as the Jordan 4 “Manila” which made sneaker news headlines everywhere.

All in all, the Air Jordan 4 is worth the cop and I’d definitely recommend keeping an eye out for future releases.

The Air Jordan 4 Retro White Oreo is a rendition of the highly sought-after “Oreo” colorway from 1999.

To estimate resale for these shoes, let’s head on over to some reselling websites!

White leather wraps most of the upper with speckled grey accents and black eyelets. White mesh panels and throats lead up to white tongues with “Fire Red” Jump-Man logos.

You can buy these sneakers today for an average resale price of $490 per pair. That’s quite high and a good reason for that may be “The Last Dance” documentary. In 2020, sneakers that were featured in the film all reveal a steep upward curve in prices.

Shortly following the release of two other OG colorways, Jordan Brand dropped the “Oreo” colorway in 1999.

Unlike the Air Jordan 4 Retro White Oreo, these kicks come shrouded in black premium tumbled leather extending from the toes to the tongues. The latter of which features grey Jump-Man logos.

The average selling price is currently just shy of $400 on reseller’s websites. At peak resale, they’ve even been sold for as high as $520.

This Jordan 4 marks the first retro release of the Oreo since the OG came out in 1999.

Staying true to the originals, these Air Jordan 4s feature tumbled black leather with grey accents. The latter covers the eyelets and parts of the midsoles.

The side panels, instead of the usual mesh paneling, feature black perforated leather. Black tongues with grey Jump-Man logos, black/grey midsoles, and black/grey outsoles finish off the design.

The average selling price of these sneakers is around $280 which is a gross profit of over $100. The Air Jordan 4 Retro White Oreo 2021 may have a slightly higher resale value.

These Jordan 4s reimagine the OGs from 1999 with a white-washed colorway and a modern refreshed design.

The almost entirely white leather upper is only contrasted by a few subtle hits, namely the speckled light grey eyelets and a Fire Red Jump-Man logo on the tongues.

The sides swap out the perforated leather for white mesh paneling that’s also present on the throats. The latter of which is wrapped under crisp white laces.

The rears feature the same tumbled leather with a grey embossed Jump-Man on each sneaker. Inside, the tongues reveal flipped “Air Jordan” branding while white footbeds are contrasted by Fire Red Jump-Man logos.

Take a moment to enjoy these detailed images via Nike.

You can buy these Jordan 4s at select retailers and Nike SNKRS on July 3rd. The retail price for men’s sizes is set at $190 per pair. They’ll also be released in GS sizes.

These sneakers will more than likely be highly sought after and I expect them to sell out instantly. Unfortunately, they’ll also be quite difficult to buy.

Using my estimated resell prediction, expect gross profits of around $150. They may even be much higher as at the time of writing this a month before the release date, the average selling price on various sites is around $800.

Where to Buy: (Retail)

Check out what else Jordan Brand has in store for fans this summer.