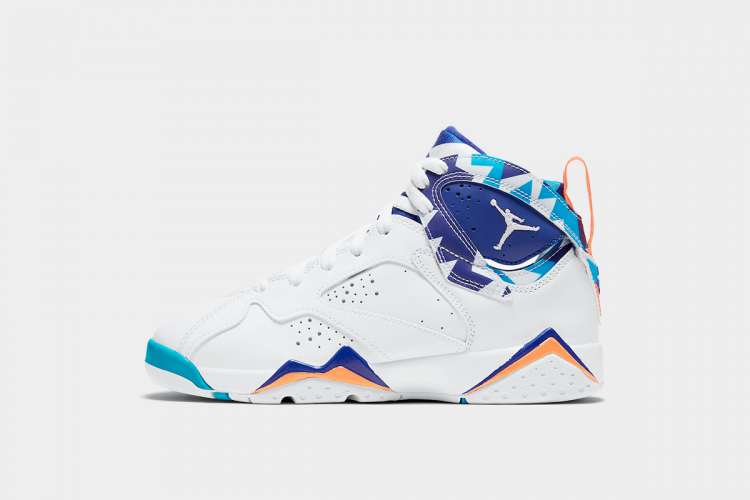 Jordan Brand is set to drop an all-new Air Jordan 7 in exclusive grade school sizes very soon. The Air Jordan 7 GS “Chlorine Blue” Retail Price is $140 and releases on January 11th. Keep reading to know all about it!

Before we dive in and take a detailed look at the Air Jordan 7 GS “Chlorine Blue, let me walk you through its interesting history.

The Air Jordan 7 is considered to be the sneaker that pushed Jordan Brand into finally being a separate entity.

Released in 1992, the Air Jordan 7 was designed by Tinker Hatfield and inspired by the Nike Huarache. Hatfield had made plenty of sneakers for Nike before, including the Air Max and Jordans starting from the AJIII.

The Huarache was ahead of its time and so, Hatfield placed its advanced neoprene bootie and places it into the Air Jordan 7. This made the sneakers lighter and more preferable.

The special part about the design on the AJVII is the lack of Nike and Jordan branding. Tinker Hatfield designed it this way so that Jordan Brand could be independent enough to stand on its feet without Nike. Thus no branding is visible on the outside of the shoe.

Then in 1997, Jordan Brand became an independent subsidiary and they can owe a lot of that to the Air Jordan 7.

The AJVII released in 1992 for $125 for men in various exciting new colorways. The upper was usually also embellished in African tribal patterns which Hatfield drew inspiration from.

Today, various new AJVs continue the line with the latest being the “Chlorine Blue” colorway. To estimate how much they’ll resell for, let’s take a look at an example on StockX.

This Air Jordan 7 features a white leather upper with dottings for ventilation on the side panels. A black heel-pull and blue Jump-Man on the collar provide contrast. Meanwhile, a white outsole and midsole are further embellished by “French Blue” hues.

On StockX, the average selling price is $170 which is a $30 gross profit. At peak resale prices, gross profits are as high as $150. The Air Jordan 7 GS Chlorine Blue will likely have a similar resale value.

This Air Jordan 7 comes dressed in a white leather upper with blue and mango African tribal patterns that appear on the collars, midsole, and outsole.

White laces and perforations on the sides clean up the look while a Jump-Man on the collar provides contrast. A “23” is placed on the heel tabs under the orange heel pulls while “Chlorine Blue”  insoles further embellish the look. A white and multi-color patterned outsole completes the design.

People have been sleeping on GS sizes for a long time but I believe these will actually sell out. You can probably expect some small profits.

Using my estimated resell value of $170, expect profits of around $30 per pair.

You can buy these sneakers at select retailers and Nike.com on January 11th for the UK. The retail price for GS sizes is set at $140 per pair.

To buy them today, visit reseller’s websites such as StockX.

In other news, Nike is set to release the Dunk Low Coast and Dunk Low UNLC very soon.

Have a great week!