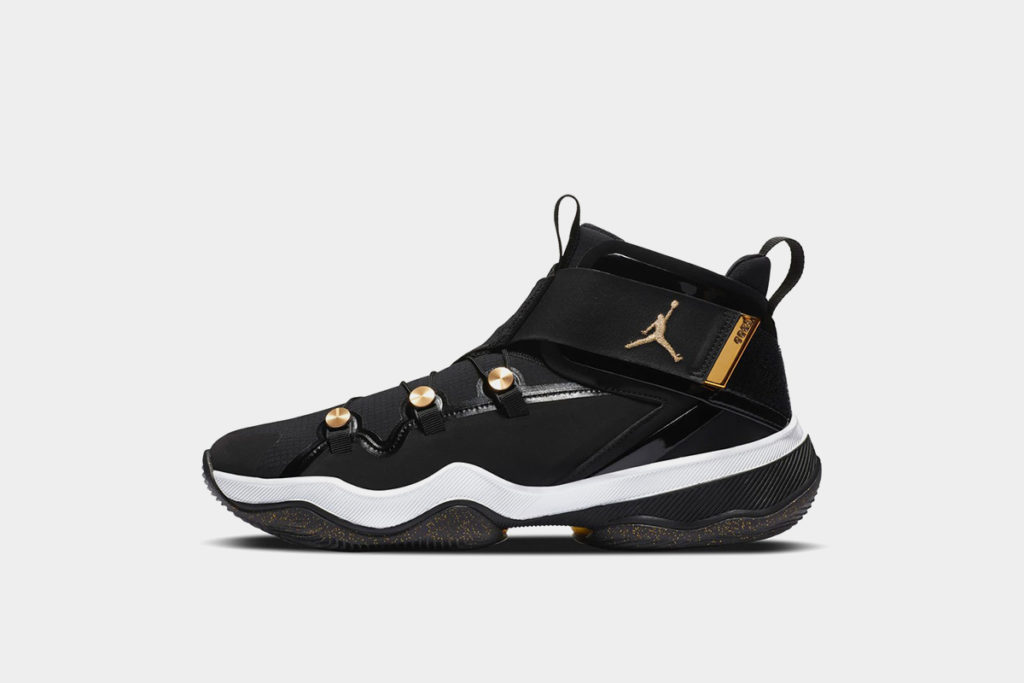 Nike’s latest release embodies their ingenuity and innovation into one futuristic looking package. The Jordan AJNT 23 Metallic Gold price is $200 and drops on the 19th of August. You’re not going to want to miss out on this one!

Similar to this brand new Jordan sneaker, August has been chock full of profitable releases. There’s still time to check out our August 2020 Best Sneakers to Resell Article. You never know, it might help you cop a few very lucrative pairs!

This Multi-Billion Dollar Market has ample opportunities for anyone willing to invest. You can actually make thousands every month! To help you get started, I suggest heading over to our Blog.

We drop release, resale, and many other guides to help re-sellers throughout their journey. The Jordan AJNT23 Metallic Gold is also expected to be highly profitable and I’ll be estimating its resale value later on.

Before we estimate just how profitable the Jordan AJNT 23 Black Metallic Gold might be, let’s get into some history!

Skip to conclusion for summarized info all in one place.

It all started with Michael Jordan, a rising NBA prospect that was drafted to the Chicago Bulls and rose to become the greatest player of all time.

In 1984, MJ signed with Nike after they promised him a special sneaker made exclusively for him. Michael declined and preferred to the Converse Chuck Taylor instead. He argued that the Nike sneakers such as the Air Force 1 had soles too thick.

Michael said that they “Didn’t let me feel the court beneath my feet” and so, he wanted to go with the converse. Later on however, Nike promised not only a brand new sneaker, they also offered to build an entire brand around Michael with many sneaker releases.

That was an offer too good not to take and although a risky deal for Nike, it would later prove to be a successful one. In 1984, Michael Jordan won the Rookie of the Year while wearing a pair of Jordans.

That was only the beginning of the legend that is Michael Jordan, he will later go on to win championship after championship. Ultimately cementing his brand along the way as one of the hottest sneakers on the market.

Tinker Hatfield is the mind behind most Jordan sneakers and he continues to this day to push the boundaries of innovation as well as fashion. Many Jordan sneakers look highly futuristic and include advanced technology for performance enhancement.

Hatfield has designed all Jordans from 3 through 13, each being almost entirely unique to the others. He even created the iconic Air Max 1 in 1985 which is still one of the best sellers today.

The Air Max 1 with its Air Unit proves the that Nike has always continued to struggled to break present day barriers that limit sneaker technology. The Jordan AJNT 23 Metallic Gold is Tinker Hatfield’s latest statement to prove that he’s still got it.

To estimate the resale value of the Jordan AJNT 23 Metallic Gold, let’s head on over to StockX.

The Air Jordan 17 dropped in 2002 and similar to the Jordan AJNT 23 Metallic Gold, it came with a premium metal briefcase. At the time, the sneaker was hyped but because of the huge price tag, it was mostly known as that “$200 Sneaker”,

The Air Jordan 17 Metallic Silver is similar to the Jordan 16 with its lacing shroud. The sneaker itself is inspired by the Aston martin sports car with its sporty yet sophisticated look.

On StockX the average selling price is $330 which is an average gross profit of $130 per pair. At peak resale prices, gross profit is as high as $300.

The Air Jordan 12 Wings was inspired by Michael Jordan himself and was released in extremely limited quantities. Similar to the “Play-Offs” colorway for the most part, this Jordan sneaker adds a luxurious touch with golden metallic accents on the eyelets and mid-sole.

A “Wings” logo on the heel and golden wings pattern that is visible after being rubbed on its natural surface finishes off the design.

Since this was a very limited sneaker, the resale prices are very high as expected. The average selling price is $470 while at peak resale prices, profits are as high as $525.

The Air Jordan AJNT 23 Quai 54 releases soon in limited quantities along with a metallic briefcase. It features no-sew overlay, a black upper with blue and orange hits and a Quai 54 pattern throughout. Quai 54 branding can also be seen on the heel.

Although a release date is yet to be confirmed, they’ve already sold for over $400 per pair. If we assume a retail price of $200, thats over $300 in gross profits. I expect the Jordan AJNT 23 Metallic Gold to have even better resale prices because of the solid colorway.

Tinker’s latest invention brings us an all new Jordan Sneaker with a futuristic yet luxurious vibe. This Jordan AJNT 23 Metallic Black is only limited to 2,500 pairs, making it even more desirable for re-sellers and sneaker-heads alike.

The materials used for the sneaker appear to be made with no-sew overlay, a rip stop base, gold plating and some fancy patent leather on the sides.

The sneaker features an almost blacked-out look with golden hits on the strap’s Jump-Man logo and Knobs. To make things more interesting, an Adapt like pull lacing system is also introduced. Finally, a white mid-sole and a black out-sole be-speckled with gold completes the design.

To sweeten up the deal, Jordan brand also throws in a premium looking, foam lined metal black case. Likely to represent Jordan the businessman rather than Jordan the Athlete.

The Air Jordan AJNT 23 metallic Gold, as mentioned, is extremely limited with only 2,500 pairs made. Along with the striking design and metal case that is sure to turn heads. This limited sneaker will surely be very profitable for any one lucky enough to cop a pair.

By selling on StockX, to break even you’ll need to sell the sneaker for at least $240. Thus by using my estimated resell value, you can expect profits of around $ $260 per pair. Even after the taxes and service fees that is an insane profit margin.

If you can sell on eBay, profits of over $300 per pair are also likely since there are no service fees.

Nike has confirmed that the Jordan AJNT 23 Metallic Gold will release Via SNKRS and select retailers. You can buy them on August the 19th for $190.

You can also buy them today on StockX, GOAT, and eBay for resale prices.

Where to Cop: (Retail) SNKRS

That’s all for today folks! For more updates on the hottest sneaker releases, follow us on Twitter and Instagram. If you’re a sneaker re-seller, I highly recommend joining our Winner’s Circle. You’ll receive invaluable insider knowledge to help you cop the most profitable sneakers.

If you’re new to sneaker re-selling, you need to read the Hypemaster Playbook. This 300+ page guide has all the information you need to become a successful re-seller.