Out of all the different variations of Jordans, the Chicago Colorways were highlighted in every storybook moment of his Jordan’s career, and, as such, will always be some of the most beloved by sports fans and sneakerheads alike. Learn more about the top models here. 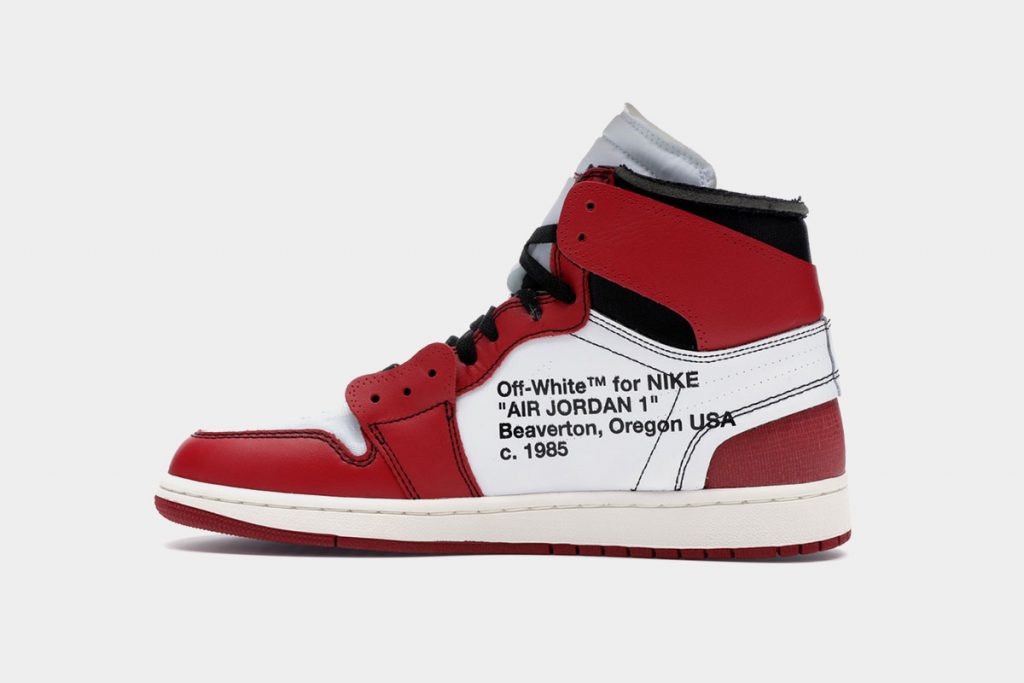 Not only is Michael Jordan the greatest basketball player of all time (don’t @ me), but in many respects he is a legend larger than life. MJ was not just high-flying, the epitome of clutch, and unstoppable on the basketball court. His Airness became a cultural phenomenon. Those of us that grew up in the 90’s remember so many iconic moments: the tongue, “Like Mike” commercials, switching hands in mid-air, the MJ shrug, a retirement encore wearing #45, Space Jam, “The Shot,” but what sneakerheads remember most: IT’S GOTTA BE THE SHOES.

While many NBA players past and present have their own signature shoe, few have also had a signature colorway, and none as universally recognizable as the Chicago Bulls red, white, and black. The Chicago Colorways were the ones actually worn by Air Jordan himself in every storybook moment of his career, and, as such, will always be some of the most beloved by sports fans and sneakerheads alike.

The Chicago Colorway is timeless and unquestionably here to stay, which might explain why these colorways tend to hold their value and are less impacted by the sometimes extreme volatility of hypebeasts. Various Jordan models might hold more or less value in different colorways, but we are going to focus specifically on the most profitable Nike Air Jordan models in the classic Chicago Colorway.

The Evolution of Flight:

Prior to the release of the first Nike Air Jordan shoe in 1985, the shoe game was markedly different. Magic, Bird, and Doctor J wore Converse; Clyde Fraizer made Puma cool; and Rick Barry shot his free throws underhanded in his Adidas Top Tens. But when the Chicago Bulls drafted a 6’6” guard from North Carolina, things would never be the same.

Before is rookie season, Jordan met with Converse and Adidas, but Nike offered Jordan $500,000 a year in cash for five years – unheard of in the 80’s. From 1985-1998, Nike developed the 14 classic Air Jordan models, which Mike wore as he tore through the NBA. As MJ’s dominance increased, so did his legend, and everyone wanted to Be Like Mike; which also meant: everyone wanted to cop a pair of J’s.

Fast forward to the end of 2018 earnings reports and Jordan Brand, a Nike subsidiary, generated 2.86 BILLION in revenue in a single year. The good news for sneaker resellers is that many of the shoes that Jordan popularized in his heyday are still immensely popular today – even 16 years since Mike played his last game.

So let’s take a look at the top 5 Air Jordan Chicago Colorways.

In Game 5 of the 1989 first round playoff matchup between the Chicago Bulls and the Cleveland Cavaliers, the 6thseeded Bulls upset the 3rdseeded Cavs on 44pts and a clutch buzzer beater from Michael Jordan. Many saw this shot and it’s imagery as the symbolic beginning of MJ’s Chicago Bulls dynasty.

Ever since, the Jordan IV “Bred” has been one of the most consistently hyped Air Jordan shoes – clearly evidenced by the insane historic resale value of this shoe. As of June, the latest rerelease has been out for more than two months now, and is still selling on StadiumGoods at $280-$325 and FlightClub at $250-$340.

It has also been performing well on StockX and GOAT, hovering around $50-$60 over retail despite the crazy high sales volume. Yes, you’re reading that right. StockX alone has seen nearly 30k sales of this shoe in the last year alone. WILD.

With the 1997 NBA Finals tied 2-2, the stage was set for another iconic MJ performance, though probably not the one anyone expected. Visibly ill with difficulty standing at times, Jordan would not be denied and erupted for 38pts and a road win in Utah. Many viewed this as one of Jordan’s most gritty, impressive performances.

However, the lore of the “Flu Game” is even bigger for sneakerheads than your average sports fan. After the game, he gave his shoes to Utah ball boy Preston Truman, who later auction them. To this day, they are the most expensive pair of shoes ever resold, selling for $104,765.

MJ won the 1988 NBA Slam Dunk contest wearing these shoes that were unlike anything the basketball world had ever seen. The III’s have so many first time design features – one of the first prominent mid height basketball shoes (per MJ’s request),  the first time elephant print was brought to a basketball shoe, and this was the first of many Air Jordan’s designed by Tinker Hatfield. Nike brought Hatfield in to wow Jordan with improved design, as they worried they might lose his endorsement to other shoe companies. But after Mike saw the III’s, he was with Nike for life.

No matter what platform you choose to resell them on, these Jordans will go for at least double retail, at a minimum.

You can see via StockX’s statistics that it’s been performing solidly since 2015 and that performance carries over to other platforms as well. GOAT: $450-595, StadiumGoods: $525-$750, FlightClub: $490-$650 – any way you slice it, these are always a great flip because they maintain their value well beyond release day. 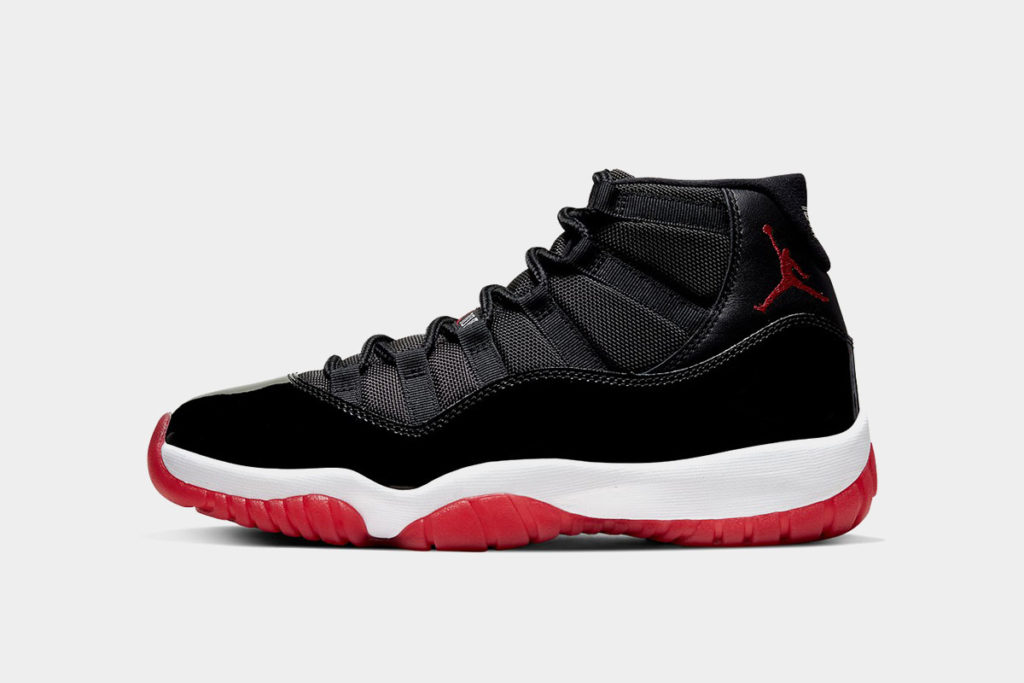 After a 72 win season, Michael Jordan wore this “Bred” edition of the Jordan XI as the Chicago Bulls bested the Seattle Supersonics on Father’s day. Three years prior, Jordan’s father, James Jordan, was shot and killed at a rest stop in North Carolina. The 1996 NBA finals, Jordan’s fourth ring and first since his father’s death, was extremely emotional for MJ and gave basketball fans images many will never forget.

The Jordan XI is popular in so many colorways because of its sleek design and patent leather detailing that makes it one of a kind. This month Nike revealed plans to rerelease this iconic shoe just in time for the Holiday season – happy holidays indeed for resellers as this shoe has been doing NUMBERS.

StockX has had the shoe consistently around a 100% premium for the last three years, and that’s probably on the lower end of the resale market.

Nike cofounder Phil Knight called the success of Air Jordan I “the perfect combination of quality product, marketing, and athlete endorsement.” Nike also ran a commercial that went: “On October 15th, Nike created a revolutionary new basketball shoe,” the announcer said. “On October 18th, the NBA threw them out of the game. Fortunately, the NBA can’t keep you from wearing them;” alluding to the NBA uniformity rule stopping Jordan from wearing the Black/Red version of the shoe.

Fact or fiction, there’s no denying that the Jordan 1 is still one of the hottest selling shoes more than 30 years after its 1985 original release.

Over the years there have been many releases and variations on this classic shoe, but what they all have in common is resale WELL above retail.

Most are probably familiar with the ultra-hyped Off-White x Jordan 1 Chicago collab reselling between $2-7k (StockX, GOAT, FlightClub, StadiumGoods), but the traditional Nike only releases have incredibly high resale as well, even years after their most recent rerelease. The resale Jordan 1 Chicago ranges between $700-$2k, while the Jordan 1 Banned is currently going for $450-$2,145.

If flipping classic J’s is something you would like to explore in more detail, JV does a nice deep dive on each of the classic Jordan models beyond these colorways in his Hypemaster Playbook.

Once a reseller, always a reseller. Leslie has been in the game for most of his life and has sold everything from Sneakers to Pokemon cards to Gold.
Search