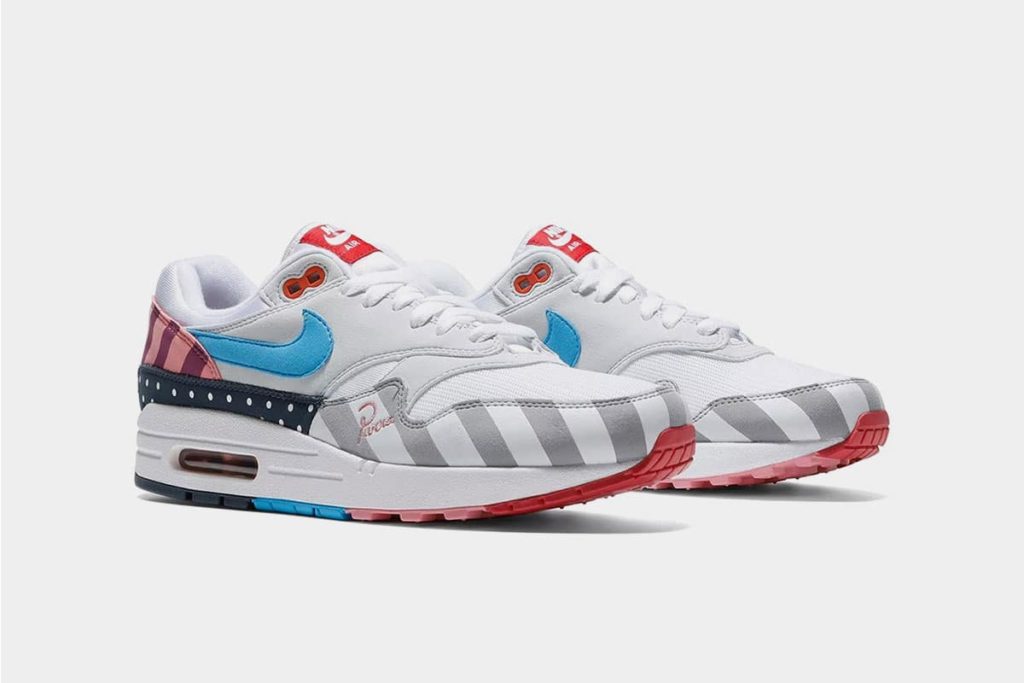 March 26th is a date that all sneakerheads hold dear to their hearts. Every year on this day, known as Air Max Day, Nike celebrates the release of the very first Air Max. That model, the AM One, released on this day in 1987, crafted by legendary designer Tinker Hatfield. It caused a world-wide stir. Inspired by Paris’ Pompidou Centre, the Air Max One was the first Nike sneaker with visible airbags on the heel.

Unfortunately for this year’s Air Max day there doesn’t appear to be too many exclusive releases that will generate a profit. However, Berlin (then Europe) is set to see an exclusive from Nike in the form of an Air Max 180. Initially released in 1991, Nike is re-releasing the Air Max 180 in a bright color way featuring white/black, neon green/pink accents and white leather in homage to bright colors of the Berlin nightclubs back in 1991.

One of if not the hottest Air Max launch of 2018 was the Sean Wotherspoon take on the Air Max 1/97. Originally part of a Nike design content that Sean entered and won the shoe is inspired by Sean’s love of vintage Nike hats from the 1980s. Featuring the uppers of and Air Max 97 and sole of the Air Max 1 (hence the name Air Max 1/97) the colourway and combo was an instant hit.

The very first pair to hit the market at the end of 2017 actually went for nearly $100,000 on eBay as seen above, setting the tone for this shoe to become a high ticket classic for years to come.

Dutch artist Pieter Janssen (a.k.a. Para) and Nike have teamed up on more than one occasion. Having developed models with Nike ranging from the Cherrywood and Amsterdam colorways the 2018 collaboration took the iconic Air Max 1 and overlayed the shoe with silhouettes of city and landscape imagery.

Any list of coveted Nike sneakers we discuss must have a mention of Off White! The Nike Air Max was re-imaged by Virgil Abloh and the team at Off-White a grand total of 7 times, that is how respect Virgil pays to this silhouette. The very first re-imagination was ‘The Ten’ version from back in 2017, featuring the translucent sole, exposed tongue and stitching that was synonymous with the resent of ‘The Ten’ line these Air Max’s set the trend for the additional 6x re-imaginations of the varying Air Max models.

For those who want to learn more about Off-White and why it’s so hot, here’s a full blog post we have about this legendary brand.

Constructed with a moonscape printed 3M reflective uppers the Moon Landing Air Max Lunar 90’s set the tone for the Mar’s Landing that released this month. This special pack was released to celebrate the 45th anniversary of Neil Armstrongs historic trip to the moon. An additional homage to America was right heel logo being covered in Red and White stripes!

Designed to release at the same time as Dizzee Rascall’s LP release Tongue in Cheek, the Air Max model was dressed up with a transparent sole, white trim outsole and ‘Dirtee Stank Recordings’ fly beneath the transparent sole. Released in a very small batch these Air Max’s caused a stir and one to add to your mantle piece.

The most anticipated pair from a collaboration of Patta, Parra and Nike – the Air Max One Cherrywood was released in 2010. Thought to be a friends and family exclusive the Air Max 1 x Parra x Patta was dressed in burgundy suede, blue chenille and a multi coloured sole. Added to the amazing exterior the sock liner was dressed in satin making the Cherrywood colour way an absolute hit since release.

In late 2018 Nike and legendary streetwear designer KAWS teamed up on a black/ volt colourway of the extremely popular Air Max 90 model. Whilst the shape of the Air Max was the same as previous models the white and volt green accents with added KAWS branded stitching launched this pair into GRAILED status very quickly.

One of the many ATMOS x Nike collaborations, the Air Max 95 was re-designed by Japanese clothing retailer ATMOS in animal print, dropping alongside an Air Max 1 silhouette. Incorporating zebra, cheetah, tiger and giraffe prints on the outer with luxe pony hair panels on the upper the wild style was revisited again back in 2018 proving how popular the crazy colorway still is.

The final Air Max on our list is an absolute ripper. Back in 2005 Nike and Parra teamed up to release a colorway known as Amsterdam. Dressed in brownstone, blue reef, dark oak and a speckled sole the Parra x Nike Air Max 1 Amsterdam is one if not the most sought-after sneakers of all time. The crest of Amsterdam is emblazed on the heel (hence the name), rumoured to have been released in around 200-300 pairs the even more exclusive Friends & Family release had somewhere in the vicinity of 24 pairs in existence!

Jarred has been deep into the reselling game for years and has no plans on switching to anything else. His favorite sneaker is the Jordan 3.
Search