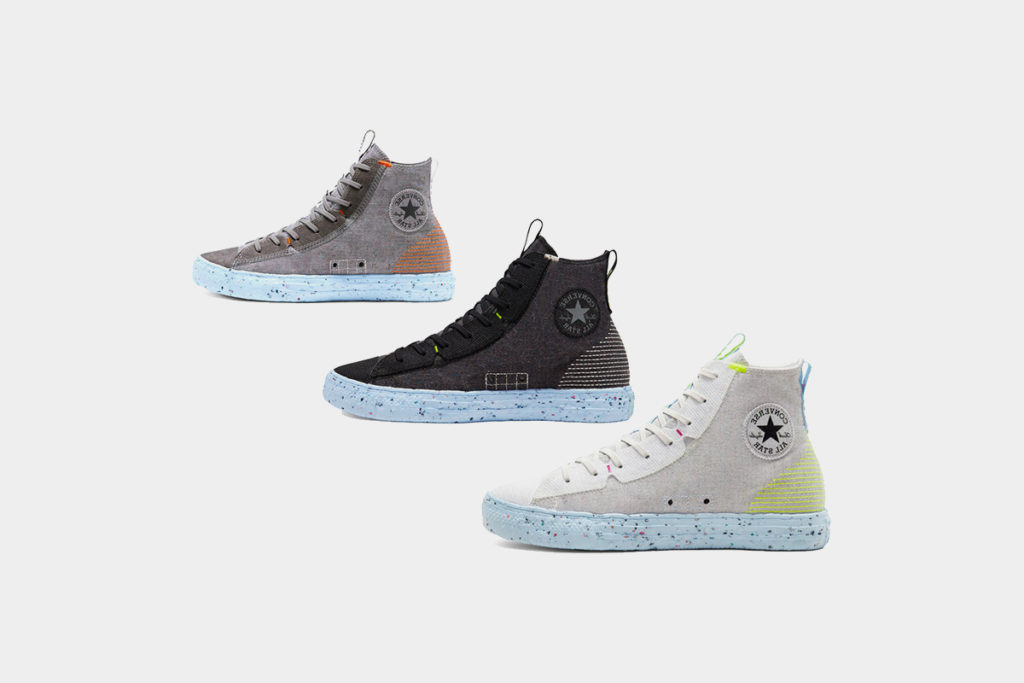 It looks like sneaker companies are finally headed in the right direction! As part of Nike’s ‘Move to Zero’ campaign, Converse is joining in and is set to release the Converse Chuck Taylor All Star Crater pack on July 23rd. Keep reading to know all about it!

This Multi-Billion Dollar market has been extremely lucrative this entire year for re-sellers. July alone saw sneaker releases with thousands of Dollars in profit per pair! To be part of the hustle, you’ll need the right knowledge and guidance. I recommend checking out our blog to get started.

We drop content on release, resale guides and much more! Sign up to our news-letter below to never miss out.

Nike has really been leading the charge, over-taking Adidas with the vision of environmental sustainability. The Nike Space Hippie pack is revolutionary when it comes to making environmentally friendly sneakers.The Converse Chuck Taylor All Star ‘Crater’ is part of that exact same campaign.

Manufacturing the most popular sneaker in North America (Converse Chuck Taylor All Star) in a similar fashion may be an effective way to counter ‘sneaker Pollution’ and inspire other manufacturers to follow.

The Converse Chuck Taylor is possibly one of the most iconic sneaker in North America. In fact, I did my homework and found that over 60% of Americans own or have owned a pair of these sneakers!

In 1908, the converse rubber shoes opened for business. They initially produced work related shoes seasonally however, that didn’t bring in enough revenue. After shifting to performance sneakers in 1907, that’s when they started success.

At the time, basketball was on the rise. Converse recognized the opportunity and went all in with their ‘Chuck Taylor All-Star’ sneakers.

The sneaker came with an all canvas or leather upper and thick rubber soles. It came mostly in a high-top variant which was more popular at the time and ‘Converse’ branding on the sides.

Although sales were low at first, Chuck Taylor came to the rescue by joining the sales team in 1921. He believed in the converse All Star so much that he even coached Converse’s industrial basketball team.

After his clever marketing skills and campaigns across the US, Converse bestowed upon him a great honor. They named their next shoe after him and thus, the Converse Chuck Taylor All Star was born in 1932.

Nike’s ‘Move to Zero’ initiative has one goal, to reach environmental goals in order to emit 0 waste and 0 carbon. Nike believes that by protecting the climate they’re always guarding the future of sports.

In the United States alone, global temperatures have increased by 20% since 1980. That effects sports as athletes will need to wear less gear, lighter clothing and games could be canceled more often.

The efforts include not using single use plastic on Nike campuses and initiating dialogue on global stages in favor of environmental sustainability. In summary, The More to Zero initiative will lower Nike’s carbon foot print on the planet.

Here are some of the ways it aims to do so:

This initiative is what started the well-received ‘Space Hippie’ lineup. The Space Hippie line up did very well on the resale market which begs the question. Will the Converse Chuck Taylor All Star Crater be as profitable?

Let’s look at a few similar releases to find out.

This sneaker is quite the interesting addition by converse. It comes in a white upper with a white mid-sole and matching white laces. Super clean right? Well that’s not all.

After the sneaker is exposed to sunlight for around 8 hours. It changes colors and stays that way permanently.

On StockX, they’ve sold decently with an average price of $150. That means each pair on average sells for around $55 in gross profits. At peak resale, profits are massive, Reaching as high as $500 per pair!

These aren’t however, that similar to the Converse Chuck Taylor All Star Crater as it’s missing the most obvious selling point. ‘The environmentally friendly’ narrative and the crater foam.

This sneaker came as part of the Nike space hippie pack and is the second colorway of the silhouette. It is largely made out of recycled materials, particularly the yarn and plastic.

It’s also made of Nike’s crater foam which is a ZoomX and NikeGrind Rubber fusion. Furthermore, it ditches the lacing system for a black stitching instead.

The resale has been pretty profitable for this shoe. The average reselling price is around $227 which would earn you a gross profit of $77 per pair. At peak resale, profits are as high as $300.

The 04 is a similar sneaker to the 02 with crater foam and black stitching. This however, is perhaps the least hyped silhouette of the bunch. It still is pretty profitable though.

According to StockX, the average selling price is $246 which means resellers are earning around $100 in profits. At peak resale, profits are around $170.

Judging by these sneakers, I’d say the Converse Chuck Taylor All Star Crater pack will probably be profitable.

Converse joins Nike and releases the ‘Crater’ pack after directly being inspired by the Space Hippie collection. These are described as their “Most sustainable chucks yet” with over 40% being made from recycled materials.

The crater pack uses innovation from the space hippie pack yet uses its own original Chuck Taylor silhouette to create 3 new beautiful sneakers. The 3 colorways included are the White/Chambray Blue, Black/Chambray Blue and Charcoal/Chambray Blue.

Converse claims that it’s manufacturing the sneakers by putting old materials to use. The upper is made up of ‘Morphlon’ which is made up of recycled polyester and textile waste.

The pair includes 100% recycled webbing, 85% recycled eye stays and 12% NikeGrind rubber. It certainly is the direction sneaker manufacturers should be taking.

The Chuck Taylor crater pack seems to be a good cop for me. As we’ve seen in the past, similar sneakers have done very well and have remained profitable.

To get your money back, you’ll need to sell the Converse Chuck Taylor All Star Crater sneakers for at least $115 after taxes and service fees. Thus by using my estimated resale value, you’re looking at profits of around $35 per pair.

Depending on how limited they are, there is some money to be made here.

The Converse Chuck Taylor All Star Crater release date is the 23rd of July at 10:00 Am EDT. You can cop them for retail from select retailers and Converse.com

You can also get them today from re-seller websites such as StockX.

Where to Cop: (Retail) Converse.com

For more info on the hottest drops, follow us on twitter and Instagram. Our Winner’s Circle provides insider knowledge to help you stay ahead of the curve.

If you’re into sneaker re-selling, check out the Hypemaster Playbook. This 300+ page guidebook will take your re-selling game to the next level!