Hi all, how’s it going? I’m psyched to talk with you guys today. We have a super special sneaker releasing next week. One that I will be thirsting over without a doubt. I don’t know if I’ve been this excited about a sneaker in a while! The New Balance and Bodega X-Racer “All Terrain” will be releasing Thursday June 25th at 10am EST for $140.

Firstly, here’s your daily reminder that here at SFS is the best place to gain valuable info about reselling and updates on all sneaker and streetwear releases.

If you want to stay up to date on all your sneaker and streetwear releases and resale strategies be sure to sign up for our newsletter. Our timely articles and guides will be in your inbox if you forget to check up on the site.

The hype is real surrounding this release and there will definitely be some profit from reselling. Let’s begin.

Feel free to skip to Release Info and Conclusion now to get the need to know details for this release.

In this “New Normal,” retailer Bodega has gotten quite introspective, looking inward to uncover what is — to them — essential. Going as far as to cite The Epic of Gilgamesh, the imprint has embraced this idea of “going off the grid” and renouncing the city life that has become many of our own comforts.

This concept, while explored to a different extent as the historic poem, is bled into the fibers of their newest New Balance collaboration: an X-Racer colorway that encapsulates the all-terrain, nomadic lifestyle they’re attempting to understand.

While on the exterior a clean colorway like that of its predecessors, the X-Racer approaches a style a bit more distinct. Rather than wholly attuned to lifestyle aesthetics, the model runs replete with earthy tones, bringing the dirt into an imaginative hiker that bridges the technical with retro 90s to early 2000s fashion.

Uppers, which arrived composed of an array of different materials, lean towards function and purpose as it adopts ripstop, nylon webbing, and detachable tongue straps throughout. A sturdy suede runs adjacent, completing DIY themes that effectively patchwork together pieces of multiple environments.

Peep the photos below. 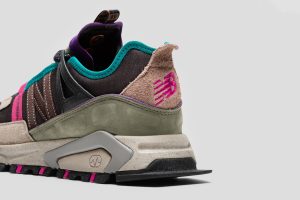 New Balance and Bodega have a close relationship and I can see why. New Balance has a brilliant, newly renovated headquarters in Boston. Bodega’s first store front (only joined by an LA store years later) is “hidden in plain sight” in Boston. Right by Fenway Park. The two companies have been working harmoniously for years now.

Here are three photos of the Bodega store. There’s no sign or anything and it seems like a unsuspecting, normal bodega on the outside and inside. A secret entrance brings you to the boutique (third photo). If you’re ever in Boston, it’s a must see.

Of recent there’s been a couple memorable sneakers added to their catalog. The first to come was the “No Days Off” 997s that released in April of 2019. A nod to New Balance’s running history. These currently sell for average of $683. A monstrous come up for a $160 shoe.

The sequel later that year was also a 997s but given the name, “No Bad Days”. While it isn’t selling for as high as its predecessor, it was still a massive success and generated a sizable line outside the store last year. These sell for $317 on average. Still can’t decide which one I like more purely on aesthetics.

They’ve also done work on a New Balance 577 dubbed HYPRCAT as well as a 998 with the “Mass Transit” moniker. Anything these two touch is fire and I can’t wait for more collections they cook up in the future.

New Balance has risen up as a top tier sneaker company. It’s obviously a matter of preference but they’re in my top three no doubt. What they’ve been able to do in the space is innovate and elevate their marketing, develop new original sneakers, be a part of impactful partnerships, and rerelease old hits. They’ve truly had a huge paradigm shift from people thinking of them as “dad” shoes to being coveted and popular on the the secondary market.

Based on the success of previous NB x Bodega shoes, these should ride that wave and have a heavy following. As you’ll see below, no word on the retail yet but it’s estimated anywhere from $200 to $220. With that said this would dictate resale prices to be in the mid $300 range.

The New Balance and Bodega X-Racer is a confident shoe to go after for a resell.

After the release be sure to check up on the usual suspects for the secondary market – StockX, Goat, Grailed, eBay, and Reddit. Be sure to head somewhere with little or no fees.

If you’re new to reselling, this blog has everything you need and more, including the Hypemaster Playbook that is an all-in-one package to begin sneaker reselling. Over 300 pages of in-depth tips from experience. I guarantee everyone will learn something no matter your previous knowledge.

Before you go, check out the list of hot shoes to resell in June – we make lists like this every month! Even if something has already released, it still could be a good time to invest in it considering it could still increase in value over time.

Check out our Twitter and Instagram too, we have an awesome community of followers. If you want somewhere to get info and chat about making money in the sneaker and streetwear resale business, it’s worth a look!

How do we feel about the “All Terrain” X-Racer from New Balance and Bodega? How do you think it stacks up to other Bodega collabs in the past?

Thanks all, have a powerful week.

AURALEE New Balance 550 Where To Buy and Resale Value