With hot brands like Sacai putting their mark on its silhouette, the Nike Daybreak is in the spotlight in 2019, especially with its Undercover collab. Learn how you’ll have 7 chances at these works of art. 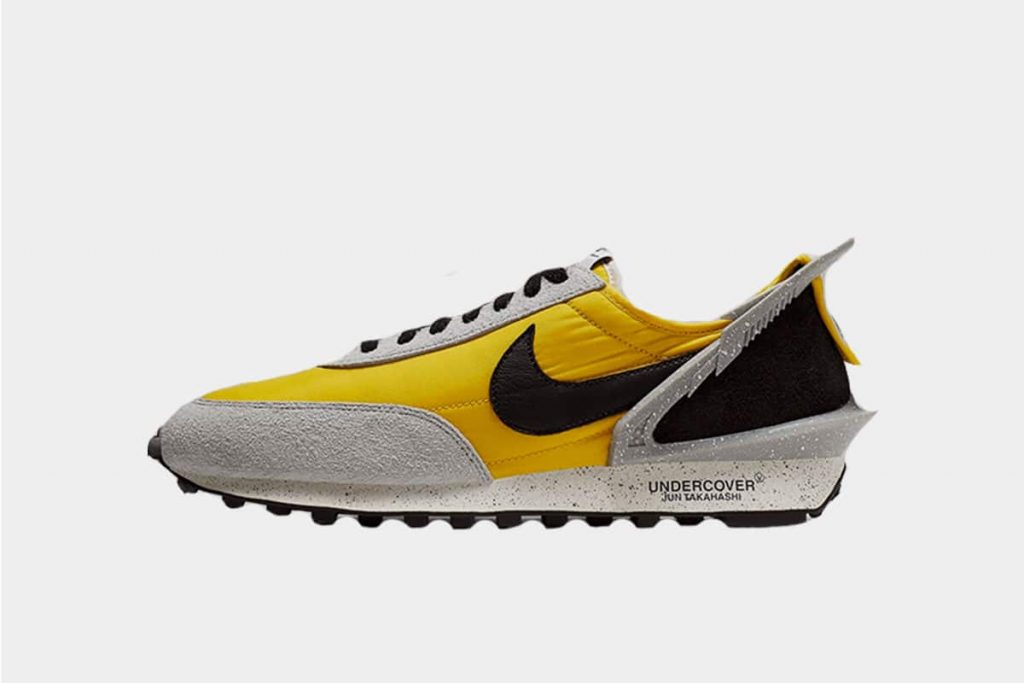 With hot brands like Sacai putting their mark on its silhouette, the Nike Daybreak shoe model is in the spotlight in 2019 .

One of the hottest drops of the summer is the Undercover Nike Daybreak, which is coming out in three colors for men, and four for women.

The Daybreak is one of the earlier among the hype shoes of June 2019, but certainly one not to miss.

To better understand the hype behind this drop, which is slated for a Friday, June 7th release date, let’s check out the history behind these two brands.

We’ll wrap up with some on foot looks, as well as tips for how to buy a pair from this collection for those who want to participate in the huge resale aftermarket (each of these shoes are projected to post a $100 profit per pair).

Designer Jun Takahashi brought the brand to life as a high end streetwear label–a tough feat to pull off, but one that Takahashi certainly did.

Now equally at home on both high end Paris Fashion Week runways and on the backs of Brooklyn millenials, Undercover is a brand that strikes a chord in culture and fashion in the subtle hype realm.

This sort of rare success was one to attract Nike, whose most hyped and expensive collaborations to date are with similar unicorns like Virgil Abloh’s Off-White and Cynthia Lu’s Cactus Plant Flea Market.

A recent win that emerged from the marriage between the two brands was the Nike React 87 Element “Undercover”, which came out in September 2018 in 4 different colorways, all of which had resale value up to $500 over its retail of $180 on Flight Club. Today the “Green Mist” colorway is most valuable, with current aftermarkets on StockX still over $300.

The 80’s was a time of huge growth and innovation for Nike. In this decade came the Air Max and Air Jordans. The lesser known Daybreak was born in 1984, and is making a comeback in 2019 as somewhat of a 35th anniversary, intentional or not.

The Daybreak was made for a female marathon runner Joan Benoit Samuelson, whose time posted in these shoes beat more than half of the mens’ winners and put her solidly at number 1 by 400 meters in the women’s.

Not unlike the classic and fan favorite Cortez, the Daybreak is a fashion staple that is wearable in almost any situation.

Since the shoe has a historic debut with a female athlete, four of the colorways are coming out in women’s sizes: Black/Sail, Lucky Green/University Red-Sail, Obsidian/Gold Dart-Sail, and University Red/Black-Spruce Aura.

An eye catching, Undercover exclusive accented flare, similar to a spoiler on a sports car, gives this version of the Nike Daybreak a progressive look but still respects the history of the 1984 model.

Speckles throughout each colorway give these kicks a nicely worn look even when brand new.

Touches like this are what make Takahashi a genius, and Nike is lucky to have such a synergy of brilliant minds to outfit the feet of fashion lovers worldwide.

As many of the limited past Nike works of art, these Undercover Daybreaks are expected to have resale value.

The retail price for all colorways is set at $160.

Current prices on StockX, Stadium Goods, Flight Club and GOAT reflect a resale value of $250 up to $500, but only for the three mens’ colorways for now.

The black will likely have the lowest resale value, followed by the Blue, and the highest but hardest to get will be the Bright citron.

We expect the women’s colorways to command similar resale value, but more likely in the bigger sizes for men who want to wear these brighter colors.

The “Black” and “Blue Jay” men’s colors are the most popular, but have the highest availability and stock numbers but should still hold a profit of about $50-$100 with an average resale price of around $250.

Undercover x Nike Daybreak : Where and When to Buy

The official release date of the seven Undercover x Nike Daybreak is on Friday, June 7th 2019.

More information is available regarding the three mens models than the four womens, which don’t officially have a confirmed release date and might come out some time later in summer 2019.

Two of the mens colorways, the Black and Blue Jay, are confirmed to release on the Nike SNKRS app at 10:00AM EST/ NYC time.

Sites like Sneakersnstuff and BSTN are holding raffles (we linked straight to the sites right there in their names) for these colorways as well.

On foot and exclusive pictures

Keep your eyes peeled for any updates, and be sure to follow all sneaker news resources out there for your best chance at getting these insanely desirable shoes.

It’ll be a tough choice whether or not to keep these or flip them for a quick buck, but for those hustlers looking to do the latter, be sure to check out our exclusive Hypemaster Playbook which breaks down some of the best strategies that are from real experience from resellers who know how to use sneaker bots and more techniques to build a booming sneaker business.

We will update this article as needed and send such updates to those on our email list.

Thank you all, and take care!

For the ultimate source in sneaker education, check out the Hypemaster Playbook today, and get a piece of the Billion Dollar Shoe Pie.

JV was inspired to start Six Figure Sneakerhead after having more people asking questions than he could answer about sneaker reselling when they saw the success he was having. His intention is to create the top resource for sneaker resale education worldwide and loves to see when customers succeed, and he's always accepting feedback for all offerings which are constantly updated to suit the customer needs and the current times.
Search