Custom shoes have recently been all the rage and usually sell out like hotcakes. Today, we’ll be going through the custom Bad Bunny Vans that are highly popular and thankfully, widely available!

September is almost over but there still are tons of hyped sneakers yet to come. See what else September has to offer in terms of profitable sneakers. To help cop the most lucrative sneakers of October, join our Winner’s Circle for a step-by-step guide to success!

Bad Bunny has quickly risen to prominence within the sneaker world following his collaborations with Crocs and Adidas. His sneakers have been one of the most hyped of 2021 and resell for hundreds over retail. This has led many to ask, is Bad Bunny the next big thing for sneakers?

Bad Bunny has only had three collaborations so far and is already believed to be one of the biggest names in sneaker culture. Some even believe that he’s en route to becoming the biggest celebrity collab name, emulating the likes of Kanye West, Virgil Abloh, and Travis Scott.

In fact, Bad Bunny’s first few collaborations were more hyped than any other celebrity collab in history! The collaboration on the Adidas Forum Buckle Low Easter Egg and The Last Café alone boosted the resale and popularity of the entire silhouette!

Even a collaboration with Crocs has been a recent hit as they retailed for $60 and are currently selling for over $240 per pair!

This Album paid tribute to the YHLQMDLG which cemented itself in the US Billboard Top 200, proving the Puerto Rican rapper’s success within and outside the realm of sneakers.

These collaborations, however, have also inspired quite a few custom sneakers, particularly with Supreme and even VANS. Here are a few of them: 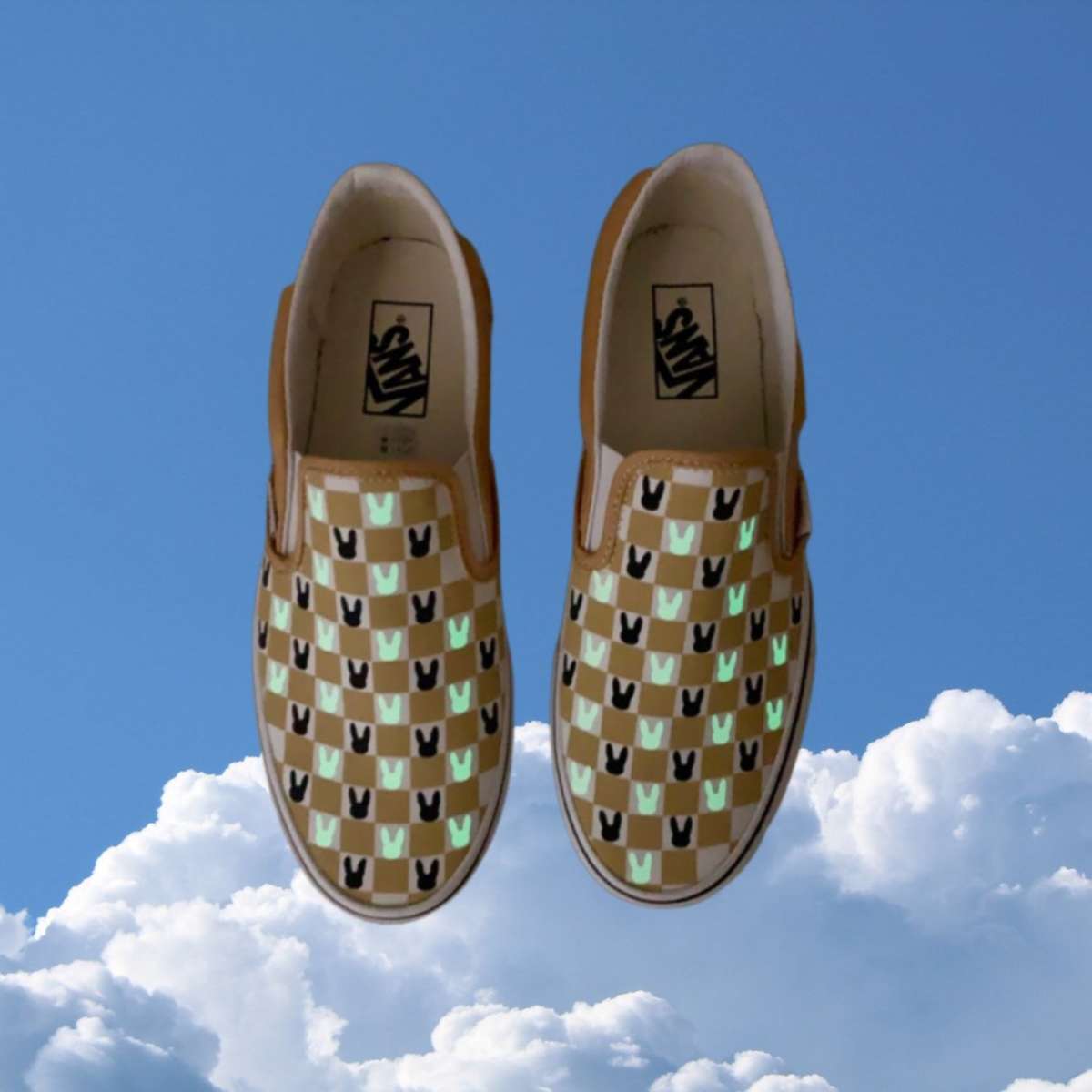 This custom Bad Bunny VANS reflective sneaker is made by Yohana Rodriguez and features an interesting design.

The uppers wear a brown earthy hue throughout with a brown and grey checkerboard that’s covered in what appears to be reflective ‘Bad Bunny’ logos. The interiors feature plain brown inserts with “VANS” logos while the rears don reflective “Bad Bunny” text. White midsoles complete the look. The checkered pattern not only features a different shade here but also reflective bunnies with holographic effects.

They’re available here for a retail price of $85.

Designed and created by ‘AWESOMEKICKS’, these custom Vans feature a white and grey upper with white reflective Bad Bunny logos all over the checkerboarded patterns. Designed by SAINTDESIGNZ, these custom sneakers are likely one of the most impressive on the market.

Inspired by the music video of Yonaguni which features an animated character of Bad Bunny himself with orange trims and an orange-pink splattered background. Sail midsoles and “Bad Bunny” on the rears complete the design.

All of these custom designs are highly reviewed and of high quality which is one of the reasons why they’re getting so popular. Would it be naïve to hope that maybe one day it might actually happen?

If you’re looking to cop highly profitable sneakers, check out our other offerings for a real education on how to resell sneakers the right way.