Nike and Kyrie are teaming up with Mr. Squarepants himself for a collection worth buying to wear, flip, or both. Here's our full guide on how to buy these.

Ohhhhhh! Who lives in a pineapple under the sea? SpongeBob SquarePants! Absorbent and yellow and porous is he!

If you aren’t familiar with the above you may have been living under a rock for the last 10 years, one of the most beloved cartoon characters who has graced not only our TV screens, movie theaters and theme parks for over 10 years but has had such a wide influence on fashion and our culture in general.

Invented by Stephen Hillenburg over a decade ago (you might remember some of his other work in that of Rocko’s Modern Life) – for those that aren’t aware– SpongeBob SquarePants is the story of a small anamorphic sea sponge whom lives in Bikini Bottom with his friends Patrick Star, Squidward, Mr.Krabs and a host of other characters.

Growing up through the 90’s is also one of the most beloved and influential basketball stars of today’s generation – Kryie Irving. Having graced the courts since 2011 and having his own line of Nike apparel and shoes since 2014, Kyrie is no stranger to special releases.

Shoes like this are the reason that the sneaker resale aftermarket is a growing billion dollar pie full of self made sellers.

Make sure you read the Ultimate Guide to Nike x Kyrie here to get the full low down.

Announced middle/late July the Kyrie Brand will be teaming up with Nike again to release a colorful capsule of 5 sneakers paying homage to SpongeBob and his friends with a release date set for Saturday, August 10th.

We are set to see a unique color release for each character: SpongeBob, Patrick Star and Squidward will all be shown against the Kyrie 5 silhouette and Mr.Krabs and Sandy Cheeks get the Kyrie Low 2 silhouette.

The whole capsule is getting a lot of love– the amazing colorways and homage to something from our childhood is getting every sneakerhead out there drooling over this release.

The first and probably the one of the most recognizable of the pack is the Kryie 5 x SpongeBob colourway. Featuring a bright yellow upper, red and brown midsoles, waved kelp inspired swoosh and smiling SpongeBob face print on the insole the whole silhouette pays tribute to SpongeBobs character from the TV series and the movies.  The heel logo is emblazoned with an adjusted Nike text that mimiks the font featuredin SpongeBobs’ logo. The upper also features dotted holes to mimic the porous nature of SpongeBob as well as the Nickelodeon logo stitched across the laces.

Next in line is the Kyrie 5 x Squidward silhouette. The design follows suit with SpongeBob’s version keeping things fairly simple across the uppers with a Frosted Spruce upper, mint laces and an aqua/purple midsole/sole. A Nickelodeon logo also features across the laces and Squidwards unhappy face on the insole – early resale prices actually have Squidwards’ colourway going for much more than SpongeBob. This could likely be that the colourway is a far easier version for everyday usage.

The final of the three Kryie 5 silhouettes is that of Patrick Star – the loveable, overweight and somewhat dim-witted starfish that is Spongebobs sidekick has one of the most outrageous colourways from the whole pack. Vivid pink uppers dotted in pink match Patrick’s skin, vibrant green soles pay tribute to Patrick’s swim trunks and Patrick’s own face is emblazed on the insole of the shoe. The same matching Nickelodeon logo and Nike writing appears in the same spots as Squidward’s and Spongebob’s colourways but there is something so appealing about Patrick’s colourway that early release pairs are already reselling for 1.0x – 1.5x times retail.

The first of the two Kryie 2 Low colourways is the Sandy Cheeks version – in honour of Spongebob and Patrick’s female counterpart Sandy Cheeks we see a Kryie Low 2 dressed to represent her underwater dive suit. White textural uppers mixed with grey soles and flairs of Sandy Cheek’s signature flower are seen across both shoes. Additionally there are nods to her underwater suit across both shoes including her arm stripes across the sole and the red dots we see on her boots located right by the heel. There are some more subtle nods to her look including acorns on the heels of both shoes and the inner lining/ tongue having a brown hue to match her fur. Early resale prices are proving to be quite good and will grow slowly after release.

The final and most in demand of the pack is the Kyrie 2 low x Mr.Krabs – the power/money hungry boss of the Krusty Krab burger shop Mr.Krabs gets his likeness portrayed on the ever popular Kyrie 2 low. Bright red uppers mixed with green money accents across the midsole and lining evoke Mr.Krabs hard exterior and his passion for money. Light/power blue soles represent Mr.Krab’s business attire and we even see a splattered Plankton (Mr.Krabs arch nemesis) on the medial of the shoe reaching towards the secret formula that has forever escaped his grasp. As per the other silhouettes we see Mr.Krabs’ face emblazoned on the inside of the sole but also the Nickelodeon logo and Secret Formula on the inside of the tongues themselves. Early resale prices have the Mr.Krabs version reselling for nearly 2.5x retail, expect this one to be the money maker of the whole pack!

Detailed Pictures of Kyrie with his Collection

Nike dropped a fun video of Kyrie handling and explaining this collection, which is truly close to his heart.

Here are some pictures from the video: 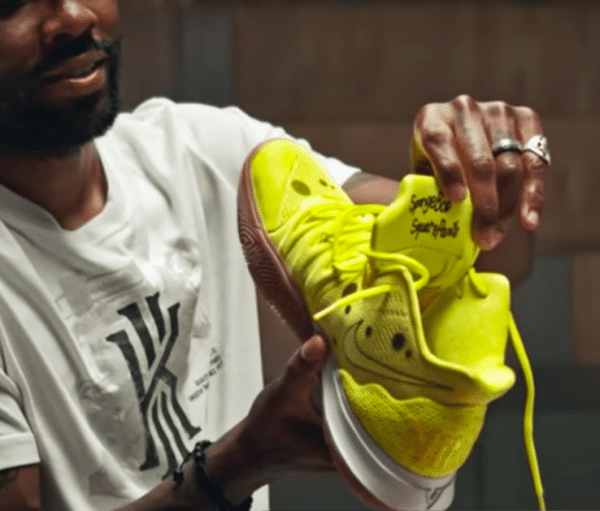 How limited will the Nike Kyrie Spongebob Collection be?

Stock numbers will actually be fairly average for the whole pack but some of the colourways are demanding a far higher premium than the others.

It’s worth having an edge on others as tons of people will be going after these kicks, and not all will successfully buy them.

Although buying these shoes is pretty straightforward in theory, you can get a huge edge with some manual and bot techniques.

For this specific release, Nike is hosting each model on its own individual launch page.

Set your clocks for 10:00AM Eastern Standard Time, when Nike’s SNKRS app is set to drop these (here’s a guide on how to use the SNKRS app to win).

Readers of our Hypemaster Playbook are motivated and educated and have an edge not just on getting releases like this but also on the specifics of what it really takes to build a shoe resale business.

Our cook group is on this and every other hype release as well–email [email protected] if you’re interested.

Other than that, we have plenty of other blog posts to keep you up to date and educated on resellable sneaker news and info.

Thank you all and take care.