Saddle-up sneaker squad! The Nike x Tom Sachs Mars Yard Overshoe is coming back for an encore. Are you going to be ready to cop a pair on their release date of January 31st? They’re going to retail for $550 according to @py_rates Twitter account, and they are due to fetch a solid resale price that is worth going after.

Why the Hype for the Nike x Tom Sachs Mars Yard Overshoe 2.0?

With Tom Sachs having creative reign that borders on the line of too much but still within the realm of cool, this shoe has generated loads of interest among sneaker resellers and fashion trend followers worldwide.

Although many of the buyers of these kicks will be puddle shy, these are actually heavy duty utility pieces of footwear appear to be designed for the rainy streets of Seattle and London, or to muck around in sloppy east coast winters. Their nickname is the “March” Yard Overshoes because March is such a miserably wet month in New York City where Tom Sachs lives.

Having an awesome inventory of kicks is a sneaker plug’s dream.

Sure, you can sling wack designs if you have to.

It’s never your job to figure out why someone wants a shoe that looks like my grandpa’s old walking shoes (not calling anyone out here).

If it sells, sell it. But let’s be real, it’s always nice to pick up something that has real swag and functionality like the Nike x Tom Sachs Mars Yard Overshoe 2.0.

Tom tested the hell out of this thing and built on what he had already accomplished with the Mars Yard Overshoe 1.0.

It still has the same combat boot slash snowshoe appearance that keeps you staying fashionable in the elements, so even though they’re white and expensive, you can be a bit more rough on them than you would be to a normal pair of shoes.

The power of the shoe comes from a surprising array of technical components, which include:

For the 2.0, he replaced the first generation’s Velctran upper with polyester tri-cut knit because he found that it was more appropriate for urban environments. Gotta keep elevating the shoe game!

How Much Money Can You Make selling a Nike x Tom Sachs Collabs?

Short answer? A lot of money. Tom Sachs Nike shoes tend to be quite lucrative.

Many don’t know how big of a name he was in the world of design before the hype of his Nike shoes.

One reason the shoes carry so much value is that Tom Sachs name carries weight in the art world…period.

Sachs first blew up on the scene as a sculptor. Now he has his crafty hands in all sorts of projects, including the NikeCraft Mars Yard shoe line.

In 2017, the Nike x Tom Sachs Mars Yard 1.0 was sold through an ultra-exclusive release only to people who attended Nike’s “Space Camp” event. Participants had to do an hour of calisthenics and other physical tests for christ’s sake, all for a shot at these sneakers.

The lucky attendees were able to buy the shoes at a $65 retail value, and those who wanted to sell their exclusive souvenirs could have made thousands of dollars in just one sale.

Roughly two years later, Nike released another version of the shoe for all the poor saps who failed to score a pair the first time. Right now, the NikeCraft Mars Yard 2.0 is reselling for $3,000+ on StockX. 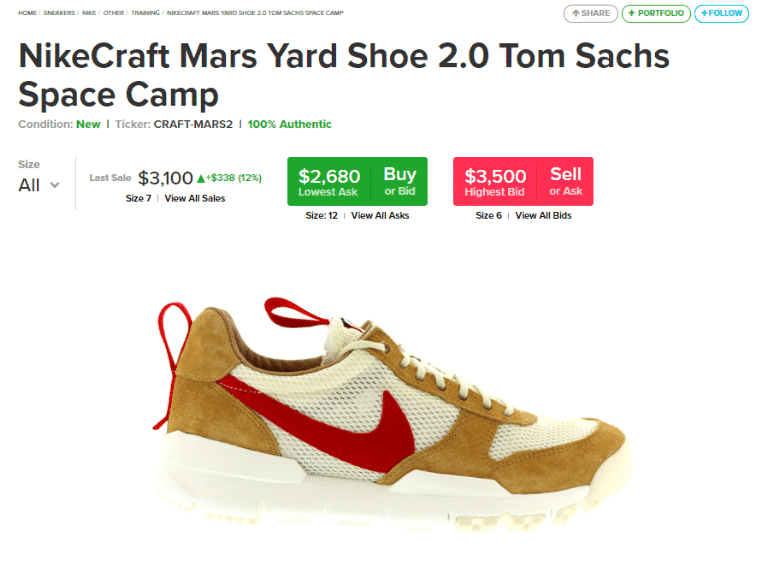 The Nike x Tom Sachs Mars Yard Overshoe 2.0 is expected to see a wider release than the original Mars Yard.

At a retail price of $550, doubling your money seems to be a sure bet. Pretty awesome too that it means $500+ in one sale.

When it comes to expensive shoes, the Mars Yard is getting all the love.

Right now the Nike x Tom Sachs Mars Yard Overshoe 1.0 is selling for around $1,800 on StockX.

How do you feel about tripling your money? It’s up to you to learn what it takes to be part of this billion dollar sneaker pie. 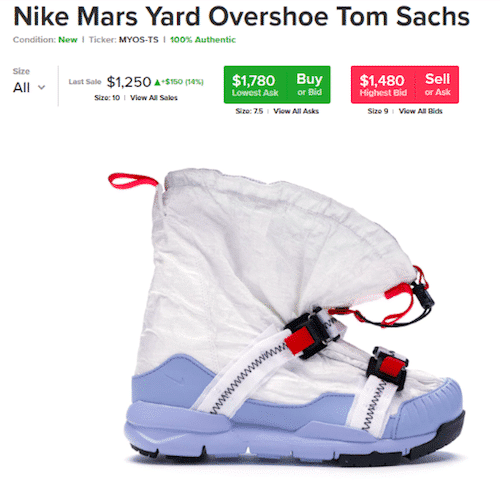 How to Buy a Pair of the Nike x Tom Sachs Mars Yard Overshoe 2.0

Nike hasn’t revealed exactly how you’ll be able to snatch up a pair of these clunky beauties, but chances are they’ll be available through a good ‘ol fashioned online raffle that you can enter by submitting the email address associated with your Nike account.

That’s how they typically do things with their limited release shoes.

One thing’s for sure, you won’t have to attend a goddamn “Space Camp” to score a pair.

The thing that sucks about their raffles is that they’re impossible to hack using bots because they don’t rely on a set time and a normal checkout process. Since the raffle has no checkout time, bots are about as helpful as a rock in your shoe.

Luckily there are some other tricks to increase your chances of scoring. One way is to sign up to multiple Nike accounts. You sneaky devil!

The Nike x Tom Sachs Mars Yard Overshoe 2.0 is just one of many shoes that’ll be hyped through the roof this year. Our Hypemaster Playbook breaks down what it takes to scale from $0 to a six figure reseller–with the opportunity now here, you might as well be one of them.

If you’re just getting started, check out our beginner’s guide to reselling rare shoes for profit and you can check out our many other blog posts for more advice on getting in on the shoe game.