Read about Alex’s firsthand experience of successfully copping a $1000 Supreme T Shirt for retail both in person and online. 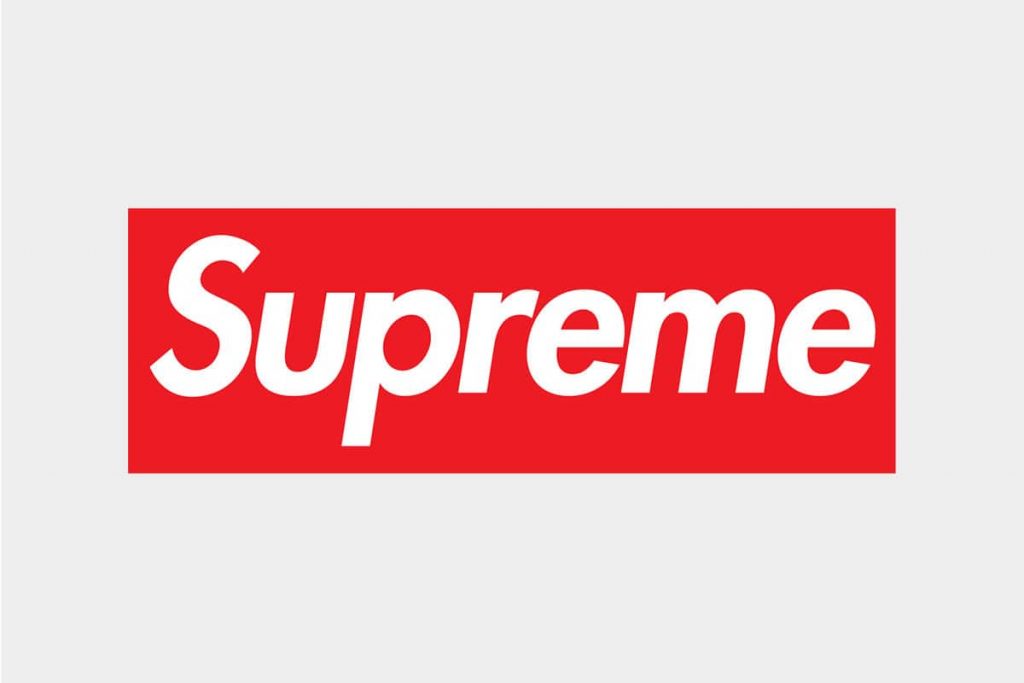 April 25th, 2019 marked the 25th anniversary of the most legendary skate brand of all time: Supreme New York of 1994.

As expected, this drop included extremely hard to buy models, most notably, the 25th Anniversary Box Logo Tee and Hooded Sweatshirt. Both are adorned with Swarovski crystals for one of the stranger Supreme collaborations of recent times.

I was lucky enough to have gotten my hands on not just one, but multiple of these desired items, one of which that went for a healthy profit just hours after getting it.

Let’s go through the two ways I got the legendary Swarovski x Supreme 25th Anniversary Tee in White.

Signing up for Supreme’s In-Store Registration in London

Note: Although my experience was in London, for those in America, the process of reserving and texting is the exact same for New York City and Los Angeles.

My experience of Supreme’s 25th Anniversary began on Tuesday the 23rd of April. At 11am GMT, the Supreme In-Store registration went live at https://london.supremenewyork.com/ . I was hopeful that I could sign up for this massive release, so I could cop one of the most sought-after pieces of Supreme clothing ever made. I rushed through the registration, only to be met with an error: my postcode wasn’t accepted.

I realised that Supreme only accepted UK postcodes, so I put in a random one quickly, and hit register. My registration was stuck on processing, and I never got the elusive ‘You’ve signed up’ screen. However, after this, I went to twitter and discord to see if anyone else had the same issue, and apparently 90% of people were stuck on the same page, due to the sheer amount of people signing up. 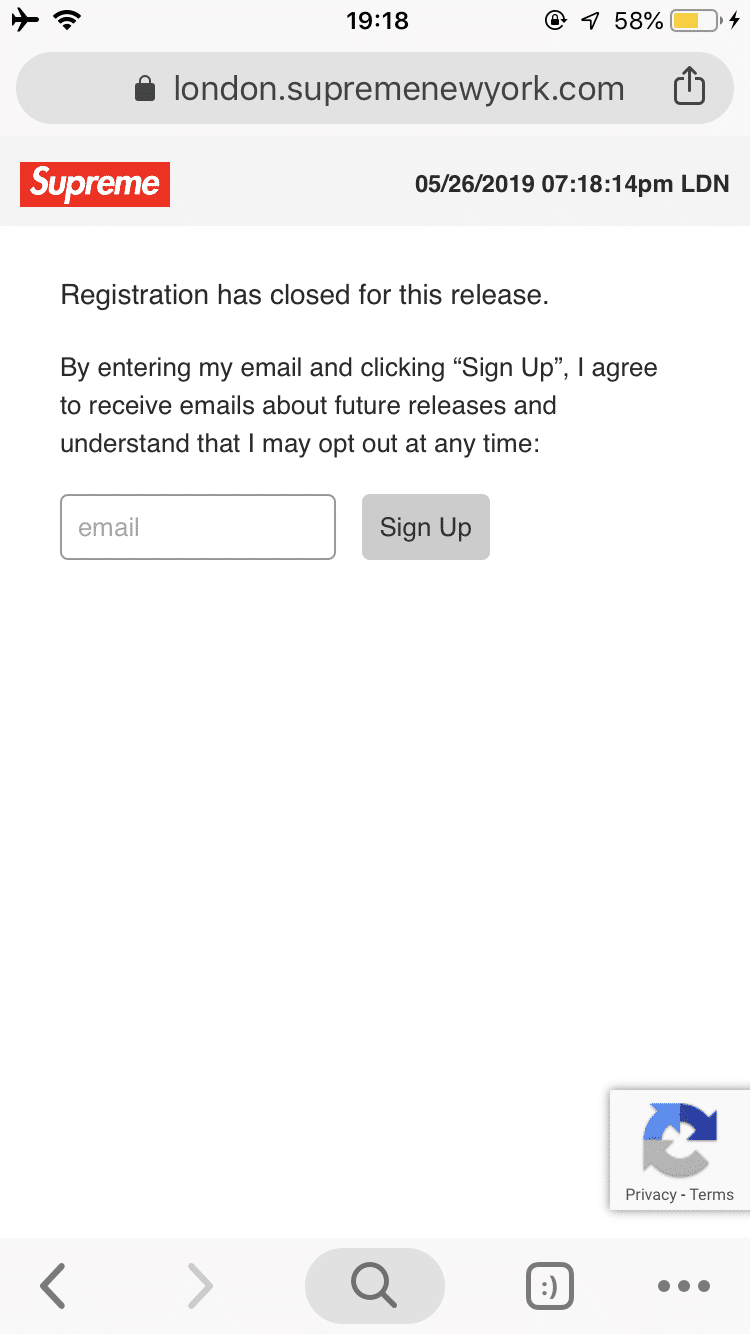 london.supremenewyork.com – where people who want to attend the London in-store drop sign up

Getting the Elusive Green Flag from Supreme

Supreme sends successful applicants a text at 1pm local time. If you receive this text, you have a guaranteed spot in the queue. At 1pm, I checked my phone, and there was no text, so I put it back in pocket.

Suddenly, I received a notification, so I checked my phone, and I had got the text. I was chosen to attend the in-store release in London!

Wednesday came around, and as I waited patiently for my text, at midday, I received my slot. I had to arrive at Supreme for around 12 for my slot.

I was nervous, as I wasn’t sure whether I would be able to get a hoodie or tee, as stock was supposed to be very low in-store. I decided to risk it, and booked my flight to London. 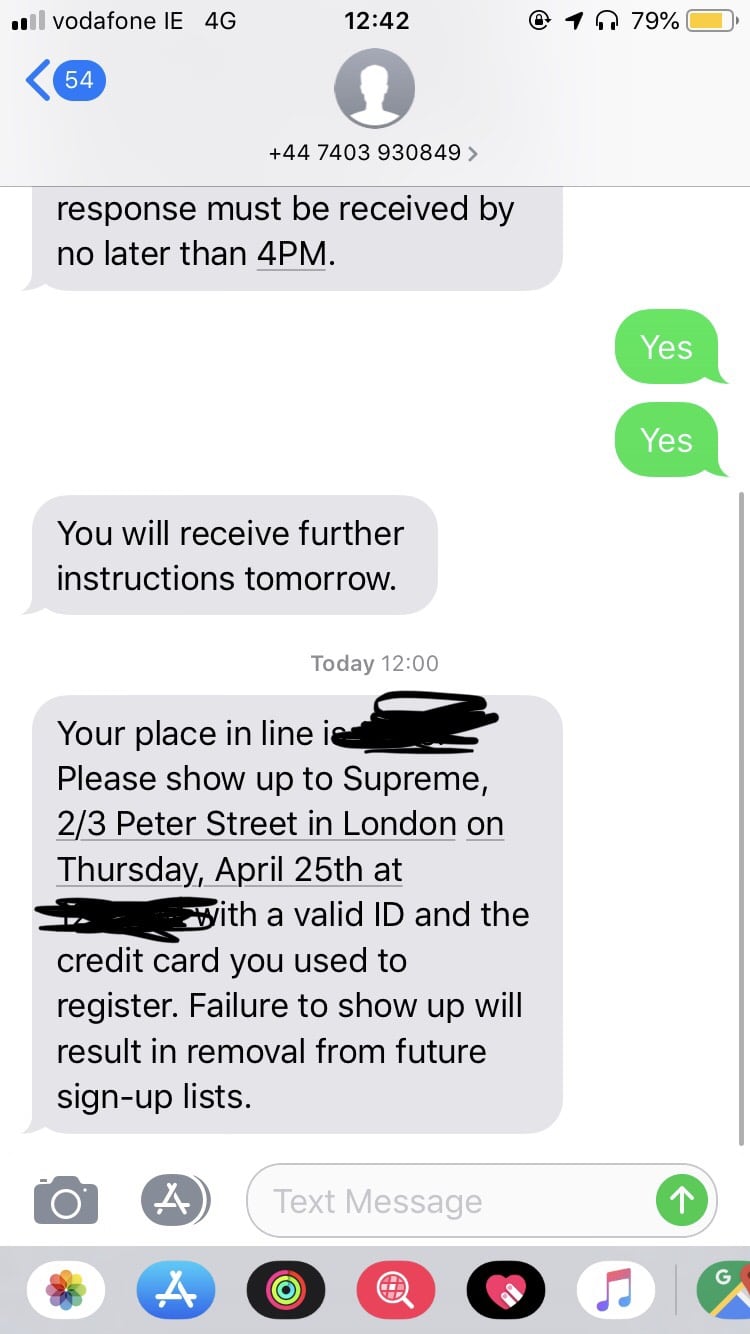 Getting the Supreme 25th anniversary release online using a bot

I arrived in London at about 8am, and got the train to the Victoria, then got the underground tube to Oxford Street. I went to McDonald’s for some breakfast, and also to set up my supreme bot for the online release at 11am.

I got to the McDonald’s at about 10:45am, and quickly set up my teamviewer connection to my PC at home, and prepared for the drop.

At 11AM, I tried to buy a tee manually, but failed miserably.

I was pretty disappointed, until I connected to my PC, and saw that I had got a white tee in medium using my bot of choice, CyberAIO. I was delighted to have secured an item already, and this made me a lot less stressed about the in-store release.

I walked down to the Supreme store, and waited until it was around 12 in order to join the queue. I ended up receiving number a number around 100~

I waited in the queue for about an hour, until I finally got in store. They had sold out of the 25th anniversary hoodies about 15 minutes before I got in, but I was happy to be able to buy an XL Swarovski x Supreme white tee. As soon as I walked out of the shop, I was barraged with offers ranging from £500 to £700. Instead of choosing to make a few hundred pounds in a few minutes,  I chose patience because knew I could get more, so I waited it out until the right offer came.

I ended up selling the tee to a guy, who I met on a street about 5 minutes away from the store itself. I sold it to him for €860 via a PayPal friends and family money transfer. After buying the tee for roughly €430, it was a tidy profit.

After finishing up with the Supreme related business I had in London, I had enough time to explore the huge city for a few hours, before getting on a packed train back to London Heathrow airport, just in time to catch my flight back home.

All exact times and numbers redacted due to security reasons.

It was a great (and profitable!) visit to the Supreme shop in London, and I highly recommend to attend one if you live in the vicinity of a shop.

We’re happy to have one of the best resources out there on those who are new to the Supreme resale game, or those tired of taking L’s. Check it out here.

We’re looking forward to the rest of the drops, which come out every Thursday within their Spring/Summer and Fall/Winter seasons.

Good luck to all next time around,