Ye is back with another Yeezy 500 high. This time with the Yeezy 500 High Tyrian which is only the second colorway in the 500 “High” line up. Keep reading for a more detailed look!

This may be just the time to start making money on the side. Believe it or not, you can earn thousands by re-selling sneakers which is just a small piece of this Multi-Billion Dollar market.

You can find the Yeezy 500 High Tyrian on our 2020 May Yeezy releases article.

You can check out our blog for some quick sneaker re-selling education which may come in handy. Also I urge you to sign up to our news-letter to never miss out on updates on the latest releases!

The Yeezy 500 High Tyrian releases on the 16th of may so as usual, we’ll be estimating its resale value. But first let’s discus its background a bit. 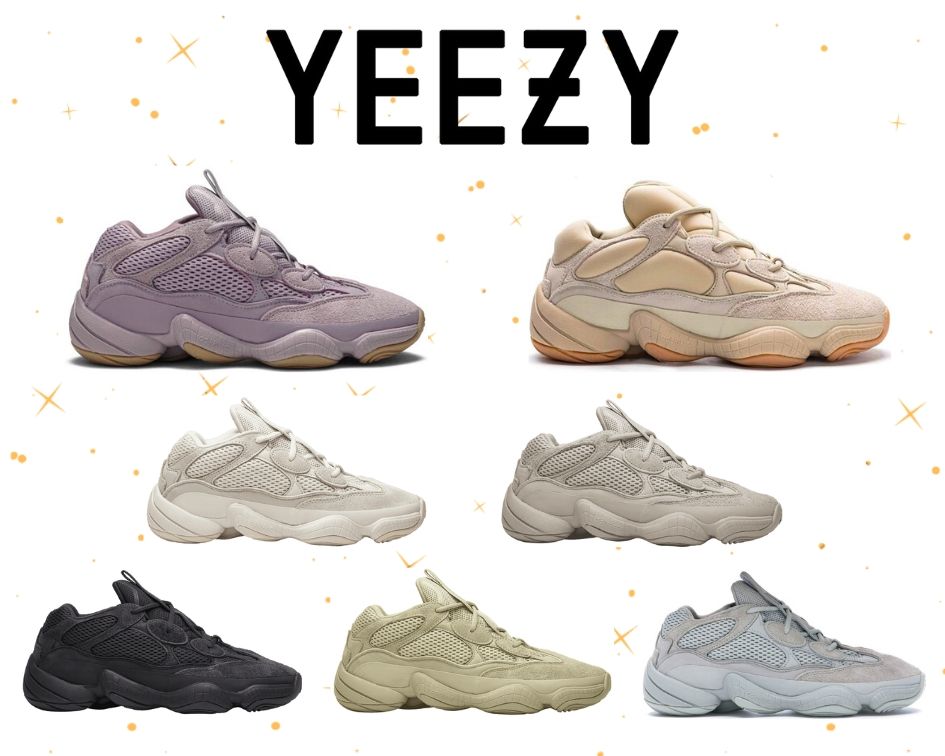 Most of you probably know the history and facts behind the Yeezy Brand. For those living under a rock for the past decade, the following should sum it up.

Yeezy was started by Kanye West, a famous rapper with a taste for fashion. He took many classes with major designers and helped design his first sneaker, the Bapesta in 2007.

After that he would land a deal with Nike and come up with gold standard sneakers such as the Air Yeezy. The successors of the Air Yeezy were limited as the partnership did not last long.

After a disagreement about royalties and other vision differences, Kanye signed with Adidas in 2015. This was a game changer not just for Kanye but also for Nike. The partnership was extremely lucrative.

Adidas jumped a spot above Under Armour in revenue right below Nike after signing Kanye. Soon after the partnership, the Yeezy Boost 750 was launched and became an instant hit.

After creating the Yeezy Boost 350 and V2, Kanye didn’t stop there and continued his creativity. He came up with the 500 and also the recent 380 silhouettes.

Now when you look at a Yeezy 500, what do you see? To most it’s an ugly “dad” shoe. However, it has quite a bit of functionality to it and people are still buying. So why stop making them?

An interesting thing about the Yeezy 500 is they ditched Boost technology altogether. They added what they call “adiPrene” instead and well, it’s pretty comfortable too!

These are by no means new technology. They go as far back as 1999 when Kobe Bryan rocked the KB8 III.

Now let’s get to the resale side of the Yeezy 500 and see how they are doing on the secondary market. By looking at similar models, we can get a good estimate for the Yeezy 500 High Tyrian. 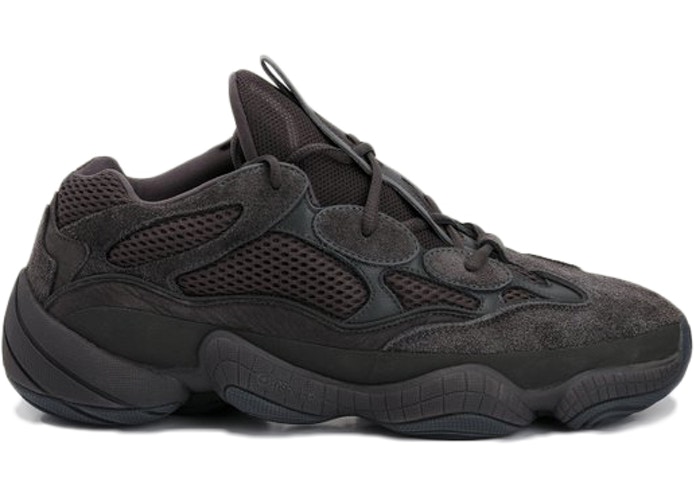 This is a F&F variant of the Utility black shoe and although very similar, it has a few differences. Firstly, what you’ll notice the most is the tonal black color on the entire shoe.

If you look closely, you can see blue/purple hues on the tongue as well as the out-sole. It may seem trivial but the beauty is in the details!

Lastly, this pair has Adidas branding only on the in-sole. Unlike with other variants that love to flaunt the logo around anywhere they can.

According to StockX, the resale value is doing decently. The trade range is between $291-$448 with the average price being $317. That’s an average profit of $117 before taxes and service fee.

Had you sold these at their peak resell values, the profit would have been around $250. 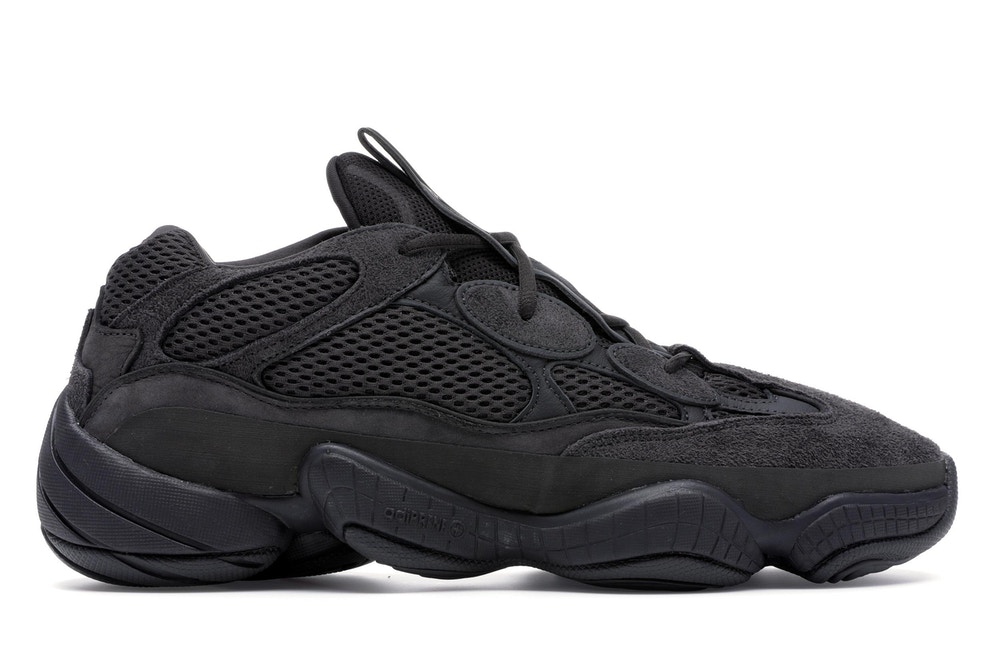 Very similar to the F&F version of the Yeezy 500. This sneaker is covered in all black with sued upper and mesh paneling. It also uses “adiPrene” technology instead of Boost, as other Yeezy 500s do.

Had you sold these at their peak resale values, profit would have been around $650. Now that’s pretty good. However, I wouldn’t be too sure about the Yeezy 500 High Tyrian doing as well.

Although it is the Yeezy 500 variant, the Yeezy “High” has a completely different resale story. 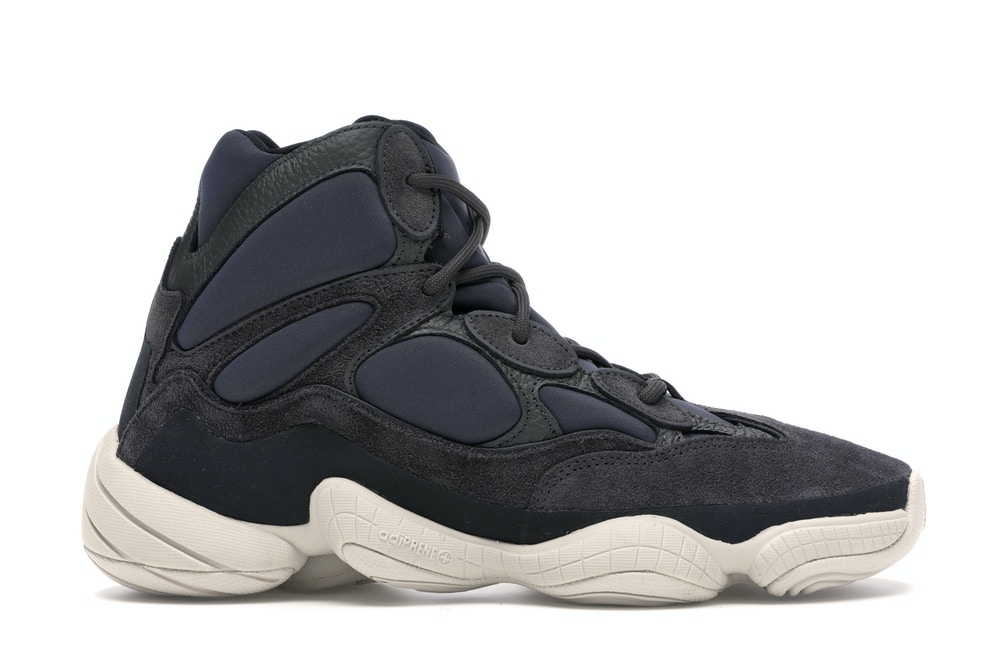 This is the first high top sneaker of the Yeezy 500 and the first High top Yeezy since the 750! Just as the “stone”, the Yeezy 500 slate features neoprene instead of mesh.

It consists of sued and neoprene with reflective piping. The mid-sole matches that with more neoprene and a gum rubber out-sole finishes off the design.

Although the resale value was good before release, it all went downhill from then on. The trade range according to StockX is $186-$244 with the average price being $228.

That basically means that after a standard Us tax of 6.75% and service fee of 12.5%. Re-sellers are mostly losing money! Judging by this high top, it’s not looking good for the Yeezy 500 High Tyrian. 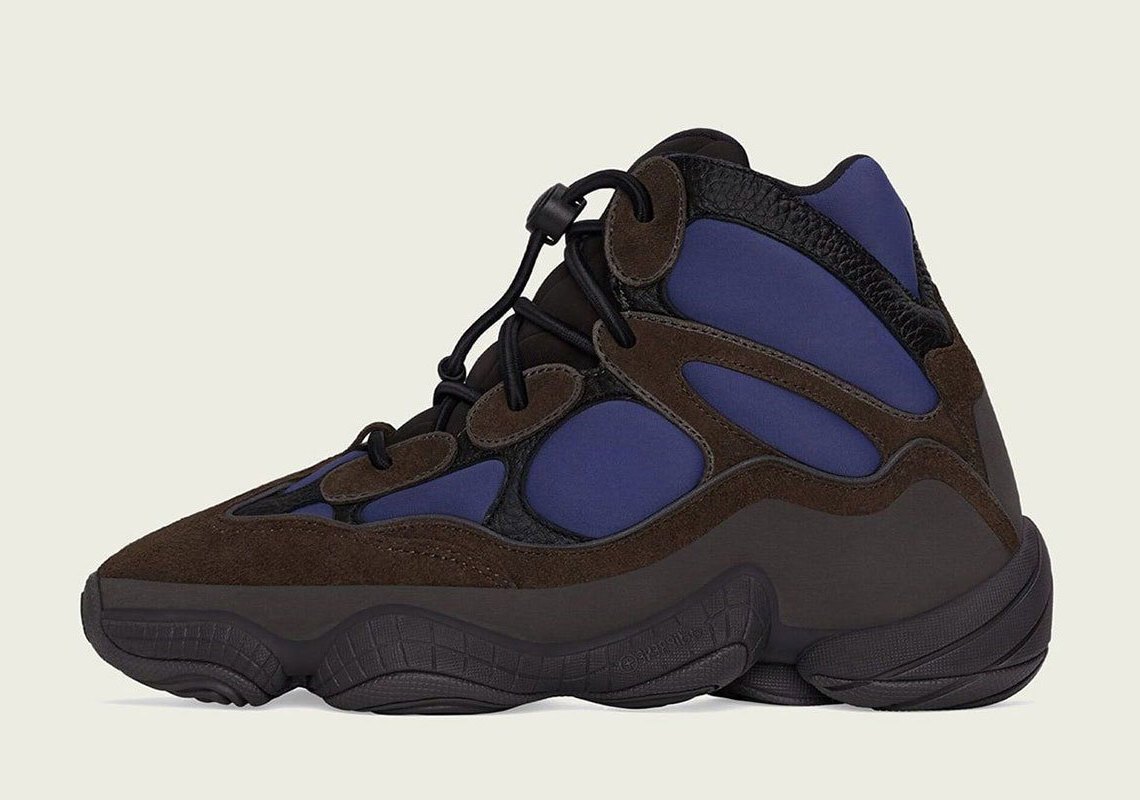 We think Yeezy 500 High Tyrian is a good looking sneaker for sure. It has a few tweaks from the previous colorway other than the dynamic color scheme.

The upper has a kind of chocolate sued which intersects the blue neoprene panels on the sides.  You can also see black leather accents near the panels.

There is also a pull tab that allows for an extra snug fit and a new lacing system. As usual, the pair does not feature Boost technology but instead, an ADIPRENE sole unit.

Here’s a closer look of the Yeezy 500 High Tyrian in natural lighting. 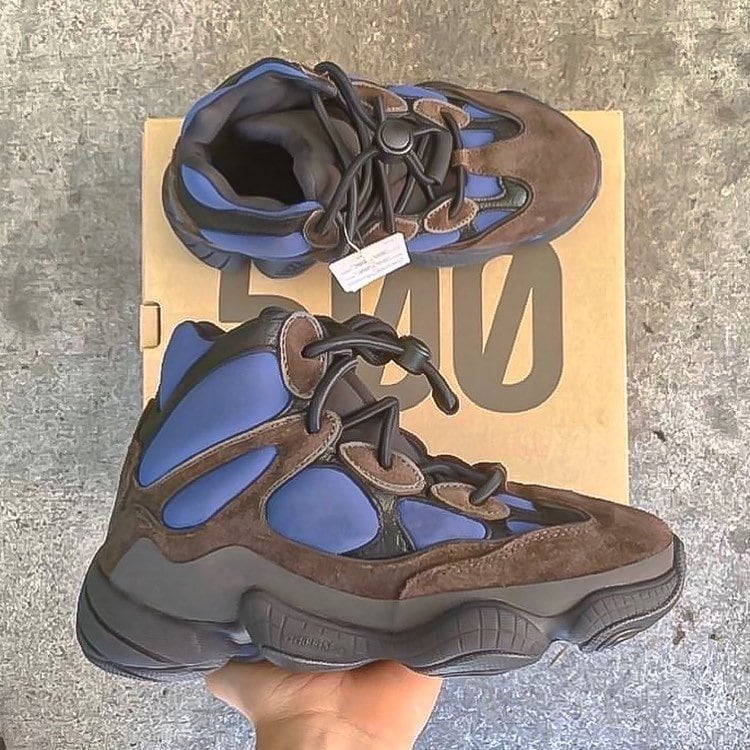 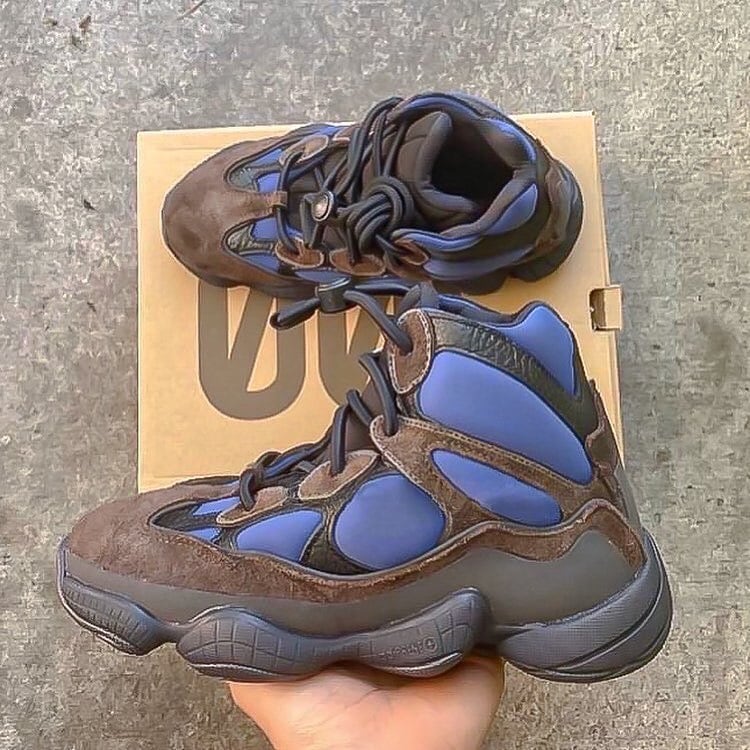 Now for what most of you have been waiting for, the resale value! For those unfamiliar with the SLATE colorway will be surprised to hear that you may be losing money if you cop this to re-sell.

Although this is an attractive colorway. Summer is approaching and the appeal of a boot like sneakers is dropping. In my opinion, this is more of a Fall or Winter wear sneaker.

Regardless of that, the SLATE is the closest thing to this colorway and as mentioned above. They didn’t do very well. 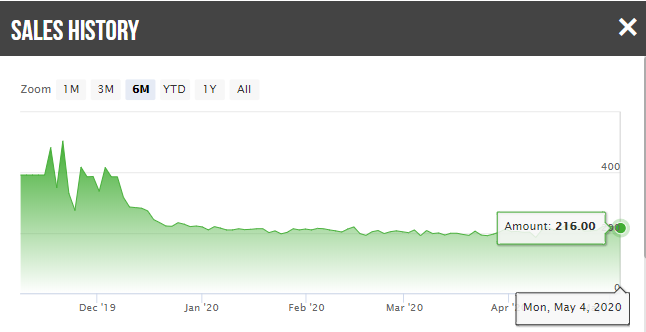 As you can see, the resale value for the Yeezy 500 SLATE dropped hard after release date. The 500 Tyrian is expected to do similarly with an estimated resell value of $240.

You don’t need to do the math to figure out you’ll lose money after taxes and service fees.

Copping these shouldn’t be too hard as this is an international release. You can find these on Yeezy Supply. If you fail to get one you can always get them from the secondary market such as GOAT, StockX.

Where to cop: (Retail) Yeezy Supply

If you want quick info on hot new releases, visit our twitter and Instagram. Also, be part of the SFSH cook group for valuable insider knowledge.

For a more detailed education on sneaker re-selling, I suggest the Hypemaster Playbook. The A-Z on all the information you need to become a successful re-seller!