The Yeezy 380 has been getting some mad love from Yeezy recently as it makes a return in yet another colorway this week! The Adidas Yeezy Boost 380 Azure price is $230 and releases on December 12th. Keep reading to know all the details!

If you want to get educated on hyped sneakers and how to resell them for massive profit. Check out the Hypemaster Playbook! This highly reviewed guidebook can turn your small reselling gig into a booming resale business!

The Adidas Yeezy Boost 380 Azure follows after the release of the Yeezy 380 Onyx and Calcite glow which sold out quickly. Before we estimate resale for the “Azure” colorway, let me walk you through some background.

The Yeezy 350 V2 for many, brought the Yeezy brand into the mainstream spotlight as drop after drop sells out within minutes. Before that, however, Ye came a long way to make his brand what it is and ultimately creating the Yeezy 380.

Kanye West got into making sneakers at a young age. Drawing them in class when he couldn’t afford to buy any. Later on in life, however, he got to work with huge brands such as Louse Vuitton.

After scoring a massive contract with Adidas in 2013 and releasing the Yeezy Boost 350. Ye was set for market domination.

The Adidas Yeezy 380, previously called the Adidas Yeezy 350 V3, is the latest among the 300 lineups. They feature a similarly smooth prime knit upper with the exception of perforation on the side stripes and translucent soles.

They’ve sold pretty well, however, resale hasn’t been too high for most of the Yeezy 380 releases apart from the first few. To estimate resale for the latest Adidas Yeezy Boost 380 Azure, let’s head over to StockX.

The Adidas Yeezy 380 Blue Oat released earlier this month, sporting pretty unappealing color tones. It features dark earthy color tones with tan camo prints all over and a blue lateral streak on each side. A brown Boost midsole and brown outsole complete the look.

The average selling price on StockX is $250 which is an average gross profit of $20 per pair. They’ve also sold for gross profits of around $280. I believe the Adidas Yeezy Boost 380 Azure will have a similar resale value.

The Yeezy 380 “AZURE” features similar color tones to the “Blue Oat” colorway, except this time the prime knit upper is darker. Earthy color tones cover most of the sneaker with a darker digital-camo pattern that’s darker and differentiates itself.

A stark contrast is provided by the blue side swoosh on each of the sneakers, a style choice we’ve seen before on this silhouette. A tan midsole and blue outsole finish off the look.

We get a first glimpse at the sneaker via Solebyjc. 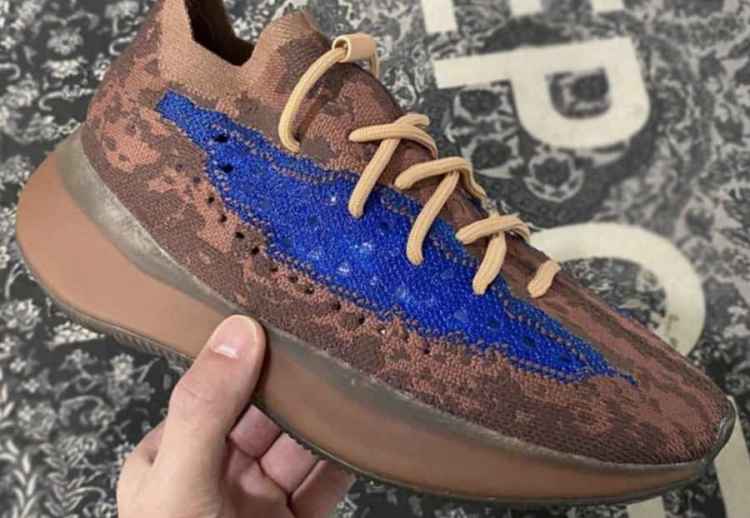 This Yeezy 380 will likely sell out fast similarly to the previous colorways. If you need help in copping a pair or multiple, join our Winner’s Circle and get access to valuable insider knowledge.

Using my estimated resell value of $250, I expect gross profits of only around $20 per pair. Thus I recommend going for personal sizes only.

You can buy the Adidas Yeezy Boost 380 Azure at select retailers and Adidas.com/Yeezy on December 12th. The retail price is set at $230 per pair.

You can also buy them today at reseller websites such as StockX.

Where to Buy: (Retail) Adidas

In other news,  Adidas is also set to release the Yeezy 380 Hylte Glow and Yeezy 380 LMNTE.