‘Ye is at it again with a buttered up colorway of the 350’s. If you’ve taken L’s on all past Yeezy’s, read up on this to catch what might very well be your first W.

This coming Saturday (June 30th 2018) will be a big day for sneakerheads and resellers as Adidas will be releasing the first new colorway of the Yeezy 350 V2 boost in 2018.

YEEZY BOOST 350 V2 in Butter
No new primeknit design.
Reversed primeknit was from a factory defective pair, that fooled bootleggers to make pairs that are being sold for crazy prices. pic.twitter.com/RfEJrcvOJN

While the Yeezy line has expanded over the past year with the introduction of the Yeezy 700 Waverunner (2017) as well as the Yeezy 500’s (2018), the 350 V2 boost is arguably the most sought-after Yeezy model that is still in production (as the V1’s that made their debut in 2015 are retired).

The new colorway labeled ‘Butter’ features the same V2 Boost body mold, but will be only the second V2 model to feature a darker gum sole (or so it appears), which was first introduced on the very limited ‘Frozen Yellow’ model that dropped on November 18th of 2017.

While the sole of the new ‘Butter’ model does not appear to be as dark as the gum sole featured on the ‘Frozen Yellow’ release, it does provide a darker contrast than most other V2 releases.

Another distinguishing feature of the new ‘Butter’ release is the absence of an alternate color stitching for the ‘SPLY-350’ lettering, the only other V2 to incorporate a universal color prime knit was the ‘Cream’ release from April 29th of 2017. Overall the shoe features a subdued neon yellow throughout the prime knit and midsole that is not nearly as loud as the ‘Frozen Yellow’ release.

The buzz around this shoe seems to be pretty high which is likely due to a couple of factors. The first being positive feedback surrounding the look of the shoe, as pointed out above there are a couple of distinguishing color feature that we have only seen on two other 350 V2 releases.

Also, the overall ‘wearability’ really stands out, where two of the three most recent V2 releases featured some pretty polarizing colors (Frozen Yellow and Blue Tint), this shoe is subtle and can likely be paired with various summer outfits.

The second reason buzz is high for this shoe is due to the fact that this is the first V2 release of 2018. While the first half of the year saw the rollout of the Yeezy 500, we are finally getting a new V2 which has historically been very profitable for resellers.

If you’d like to really dive deep into a full out lesson on insider techniques to becoming a sneaker plug, the 160 page, 5 part Hypemaster Playbook is for you.

How many pairs will release ? Is this a limited  Yeezy release ?

One question that has yet to be answered is what the stock numbers will look like. While the last two V2 releases (Beluga 2.0 and Blue Tint) saw some of the largest inventories ever produced for the V2 model, there is still no confirmation on how limited or widely available the ‘Butter’ model will be.

While in the past Yeezy Mafia has been the go-to source on Yeezy release numbers, they have had some big misses recently that did not pan out (See their claim that the V2 ‘Creams’ would be re-released in the millions).

That being said, Yeezy Mafia is claiming via a tweet from June 20th that for the ‘Butter’ release Adidas Europe will have inventory of approximately 13K pairs, while Adidas USA will have inventory of around 16.5K pairs. If this turns out to be true that would put this release on par with the V2 ‘Breds’ which released on February 11th of 2017, so north of $450, a 200%+ premium on its $220 retail.

Despite all the hype, positive feedback on design, at absence of a recent Yeezy shoe this year, the resale on the v2 Yeezy’s has been dropping like a brick since the Blue Tint v2’s of last December saw lows in the $300 range. So, $500 is a current preorder price which is always higher than the live resale, we’ll do another price analysis post release a little further down in this article.

As a follow-up to this statement, Yeezy Mafia sent out another tweet on June 21st in reply to the tweet mentioned above claiming that the Adidas online stock had just doubled, if this is true then we are looking at 26K pairs for Adidas Europe and 33K pairs for Adidas USA, definitely a bigger inventory but still pretty limited compared to the ‘Creams’, ‘Beluga 2.0’, or ‘Blue Tints’.

Now to answer the most important question for resellers, what type of return on investment can we expect for this release?

To better answer this question let’s look at the some of the current resale values for all 11 previously dropped Yeezy Boost V2 models (all prices are sourced from StockX as of June 24th, 2017 based on the current lowest asking price for any size):

While the prices above reflect current lowest asking prices on StockX, it is important to note that many of these shoes sold for much more immediately after they were released.

Another item to take into consideration is the rarity of each release, while some of these shoes have seen limited restocks (Zebras, Beluga 2.0, and Blue Tints), for the most part, this doesn’t seem to happen with much regularity.

In the past Yeezy Mafia published a rarity chart which has been cited by various other sneaker websites, as anything with Yeezy Mafia you should take it with a grain of salt, but consensus in the community is that the chart cited below is fairly accurate in terms of the numbers of each colorway released (note that actual numbers aren’t listed just bars indicating which colorway saw the largest releases): 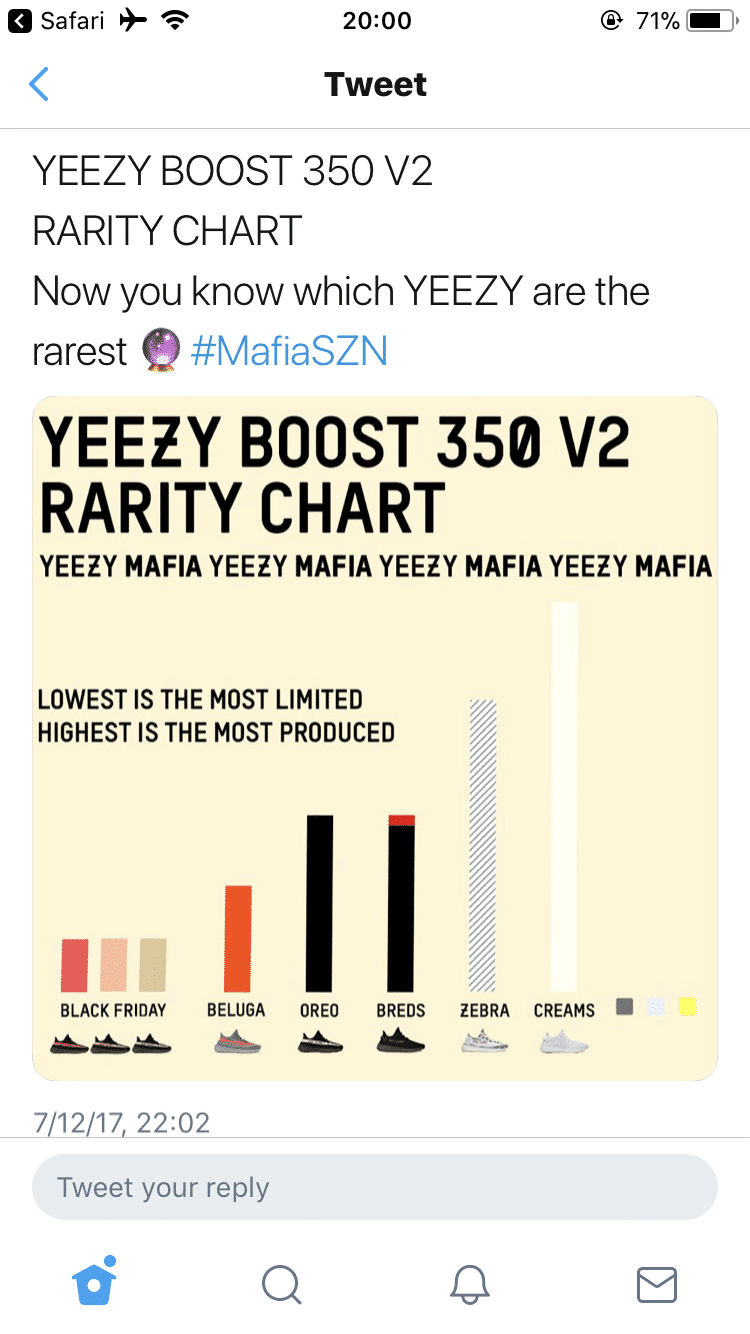 When comparing the current lowest asking prices on StockX (as of June 24th, 2018) with the ‘rarity’ chart produced by Yeezy Mafia above, you can quickly see that limited release does not directly correlate with resale price.

The ‘Frozen Yellow’ release which most will concede was the most limited V2 release to date, only falls in the bottom quarter of all V2 releases as far as resale price goes.

There are likely a few reasons for this, one being that the ‘Frozen Yellow’ colorway was not highly sought-after, while it was rare it was a very exotic color and not something you could easily pair with your outfit for a night out on the town.

Another reason is likely the age of the shoe, traditionally with Yeezy’s the older the shoe the higher the resale price, because as time goes by less and less deadstock is available thus driving up the price for deadstock condition shoes.

Although age does not always guarantee a higher resale price, and the wait and hold approach poses some risk if at any point in the future a restock is announced or hype for a shoe diminishes.

The ‘Bred’ colorway was very sought-after by sneakerheads and currently has the 2nd highest resale value of all V2 models despite the fact that it sits right in the middle in terms of numbers of pairs produced.

Hype and demand, price and wearablility

Given this information, the ‘hype’ or overall consumer sentiment regarding the look or ‘wearability’ of the colorway is in many cases more important than the number of each model produced (although if any Yeezy model is produced in vast quantities it will certainly affect the resale value negatively, and we’re talking production numbers in excess of 300K pairs).

So back to possible resale price for the upcoming ‘Butter’ release on June 29th. It’s impossible to accurately predict the resale value for any shoe, but given the data provided above, I would presume the ‘Butter’ colorway of the V2 will resale in the range of $450 to $575 in the first week after release.

The resale price will continue to drop, but I can’t see the immediate resale price falling below $250 in the future. My reasons for this are simple, this is the first V2 release of 2018, and since their release, the V2’s have been the staple ‘Yeezy’ shoe for sneaker enthusiasts.

Additionally, this is a very ‘friendly’ colorway, a solid prime knit in subdued neon yellow that will pair well with any summer kit. Also, add in the fact that this will be the only other V2 release where the ‘SPLY-350’ lettering is the same color as the prime knit and you have a pretty standout V2. And finally, if we are to trust Yeezy Mafia, and the stock numbers are somewhere between the ‘Breds’ and the ‘Zebras’, it’s a pretty sure bet that these shoes will resale higher than the most recent V2 releases (Frozen Yellow, Beluga 2.0, and Blue Tint).

Price Tracking
We’ll be following the resale price immediately after release and revisit our price estimate to see how we did.

*Update: This one was a flop on the resale market. We saw new lows in the $200 range with resellers letting the price drop like butter melting on piping hot toast, with highs of $400 or so not lasting very long*. Is the Yeezy resale dead? Thankfully there are more shoes to release this summer.

How to cop for retail:

????•Adidas Confirmed App (Must sign-up by June 27th at 10 AM EST and be in the ‘zone’)
•Adidas.com (https://www.adidas.com/us/yeezy site goes live at 10 AM EST)
•YeezySupply.com (Time of release is unknown)

Check out the newly updated 280 page Hypemaster Playbook here for all advanced manual and full guide on using sneaker bots.