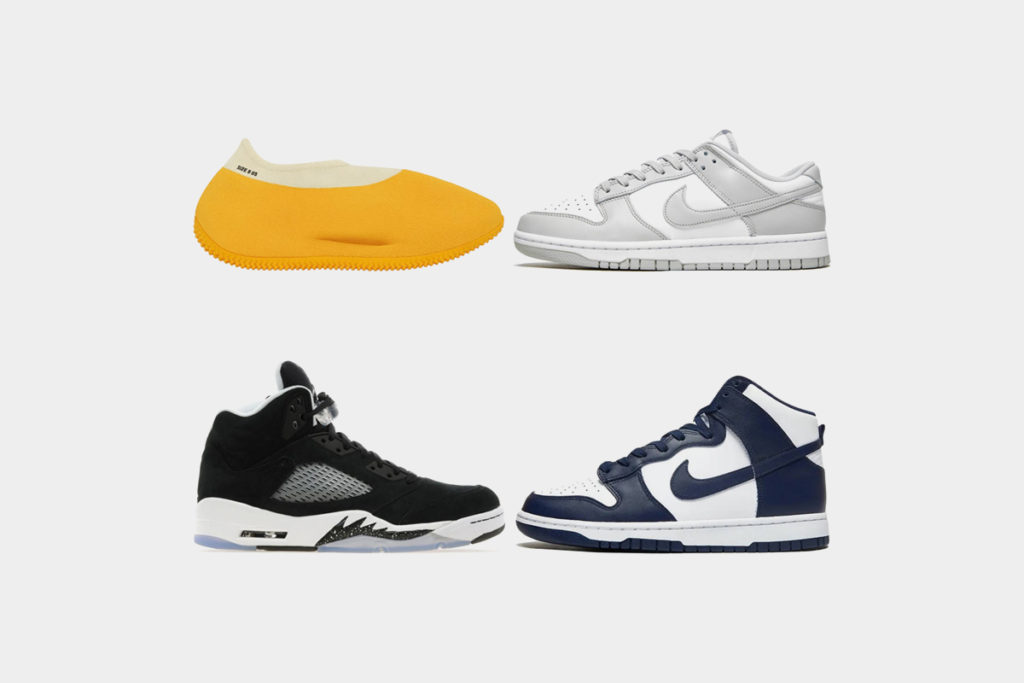 Discover the sneakers to buy and resell from this past week which included a number of Nike Dunks, Air Jordans, and a brand new Yeezy silhouette!

If you want to learn more, or pretty much everything there is to know about sneaker reselling, check out the Hypemaster Playbook!

We have some ground to cover so without further adieu, let’s get right to it!

The Nike Dunk Low Grey Fog features a familiar colorway that we’ve seen before on the ‘Disrupt’ silhouette.

Its average selling price is a very decent $260 which is a $160 gross profit!

The Nike Dunk High Villanova was initially released to celebrate a Nike-affiliated school but was also released in 2016 and returned this September.

On StockX, the average selling price is still currently a whopping $430 and hasn’t dwindled much ever since its return 5 years later!

The brand-new Adidas Yeezy Knit Runner Sulfur AKA the “Turreliens” released this past September and you would be one lucky person to have copped a pair.

The uppers feature a cream sock liner and a “Sulfur” knitted upper that wraps the entire foot like a sock.

Although reminiscent of the Foam Runner Ochre, these sneakers feature an eclipse plate-like piece in the midfoot and a yellow rubber outsole.

The average selling price on the secondary market is a very decent $620 while they’ve also been sold for as high as $1,200 on StockX!

The Air Jordan 1 High OG Prototype is not only a new colorway but also featured a new design that’s likely borrowed from the brand’s ‘Switch’ lineup.

A perforated line separates the collars from the upper and indeed, separates them to transition from a low-top to a high-top depending on the wearer’s mood.

As for the colors, this Jordan 1 rocks a multi-colored upper with different shades of blue on the collars, black Swooshes, and heel overlays, off-white toes and laces, and clean white side panels and toes.

These sneakers have been highly anticipated but they’re not all that profitable. On average, they’ve yielded resellers profits of around $50 per pair.

The Adidas Yeezy 700 Mauve features a multi-material construction with earthy color tones. Brown suede covers the toes and parts of the toe boxes while dark mesh fills out the gaps in between.

More black suede appears on the medial while mesh covers the side panels and black leather covers the eye stays. Mesh throats and collars add to the “Deconstructed” vibe while Boost midsoles and tan outsoles complete the design.

The average selling price is $320 which is an $80 gross profit per pair.

Also known as the Air Jordan 5 Moonlight, this sneaker remains close to identical to the Jordan 5 Oreo from 2013.

For an average resale price of $240, resellers have been earning gross profits of around $50 per pair.

With that, we finish off our list but be sure to join our Winner’s Circle to never miss out on similar releases!