Initially revealed as a sample back in August of 2020, the “Bright Blue” Yeezy 700 now has an official release date and images. The Adidas Yeezy Boost 700 Bright Blue has a release date of April 17th and a retail price of $240 per pair. Stay tuned as we go through all of the details!

Before we estimate resale for this brand new 700 colorway, let’s go through some background information.

Kanye West, along with Adidas in 2015, created the Adidas “Yeezy”, a sub-division of Adidas that’s amassed a large following. Because of Ye’s immense popularity, Yeezys have become extremely popular and are now enshrined within sneaker culture. Even though they’re fairly new to the market relative to something like Jordans.

Kanye has always been coming out with sneakers that have very peculiar designs. The Yeezy 350, for example, separates itself from the market by being unique, comfortable, and functional at the same time.

In recent years, Kanye has taken it up a notch with the Foam Runners and the Yeezy 450. Both of which have polarized fans, some arguing that they’re “revolutionary” while others are adamant that the sneakers are just plain weird.

Either way, most if not all Yeezys sell out and non of which are much more sought after than the 700 V1s.

Making its debut on the Season 5 Yeezy fashion show, the Yeezy 700 stole the show and introduced a brand new silhouette. After various new colorways and restocks, it’s clear that the 700 V1 is a top seller. More interestingly, they’re very profitable on reseller’s markets, often selling for double their retail prices.

To estimate resale for the Yeezy 700 V1 Bright Blue, let’s check out a similar sneaker on StockX.

Also, sign up for our newsletter for updates on the hottest sneaker releases!

The 700 V1 “Sun” separates itself from the other colorways by being vibrant instead of taking on the usual muted color tones.

The average selling price on StockX is a decent $540 which is a $300 average gross profit! The Adidas Yeezy Boost 700 Bright Blue will likely have a similar resale value. 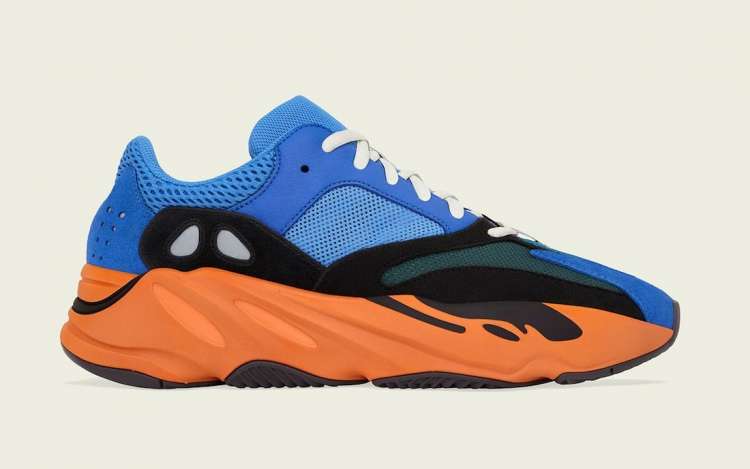 As its moniker suggests, these 700s adopt bright blue hues all over while also being reminiscent of the “Wave Runner” and “Jesus is King”.

The upper primarily consists of mesh, nubuck, and leather with netted side panels and collar linings. White laces provide contrast against the blue throats that lead up to a pair of plain blue tongues. Meanwhile, reflective materials near the rear are surrounded by black suede.

Green suede covers the forefoot while BRIGHT BLUE suede is featured onto the toes. Orange midsoles, similar to the aforementioned “Sun” colorway are contrasted by black herringbone outsoles to complete the look.

You can buy these sneakers at select Yeezy stockists and adidas.com/yeezy come April 17th. The retail price per pair is set at $240 for men’s sizes.

To buy them today for resale prices, visit GOAT, Flight Club, or StockX.

This 700 V1 will definitely sell out and I also expect some very decent profits. They’re already selling on StockX for over $500.

Using my estimated resell value, I expect gross profits of around $200 per pair. Thus according to our Hype Meter, I give these sneakers a “Good”.

Where to Buy: (Retail) Adidas.com

Not your style? Take a look at the Nike Dunk Low Michigan that’s set to drop very soon.