Since its debut in 2016 in Long Beach CA, Complexcon has worked hard to hold up to its many taglines:

“The Future Made Physical”

Sponsored and created by multimedia conglomerate Complex, who is on the pulse of culture creation, it’s no surprise that this event attracts some of the best designers in fashion and footwear.

Rare footwear drops have become a staple at Complexcon, making it an attractive opportunity for people getting rich off of flipping sneakers.

2016 is a prime example of shoes and merch with insane, sometimes $7000+ resale value–check Complex’s report on 2016 resale prices here.

For 2019, for the first time since Complexcon’s birth, the crowd had a chance to choose between two cities and dates: Chicago’s event was July 20th & 21st, and Los Angeles (Long Beach) was on November 2nd and 3rd.

Both had resellable shoes that made some lucky attendees a few hundred a piece if they were in it for the flip — or a rare souvenir to keep.

Let’s take a look at what went down in the world of kicks with this now historic event.

(For an insider’s look at the cultural and music recap of the event, check out Respect My Region’s write up here).

Chicago did not disappoint its first year, and was arguably just as good if not better than LA when it came to the footwear it came out with.

An absolute classic and highly coveted shoe from Virgil’s iconic Off-White, which merges art and fashion arguably better than any brand in 2019.

The resale market definitely agrees with that previous statement.

Japanese brand Atmos is low key and high key at the same time, falling perfectly into the category of “if you know, you know”.

This time around, for Complexcon Chicago exclusively, they re-released their Animal Pack, which is in its third iteration.

These are anything but low key and turn heads of all different classes of onlookers, so it’s not surprising they sold out fast.

Allen Iverson may be somewhat forgotten for the younger generation of NBA fans, but for millenials and older, he’s still one of the GOATs.

It’s nice to see him popping onto the shoe resale scene–and seeing prices like this will make it much less surprising that shoe reselling is a growing billion dollar pie. 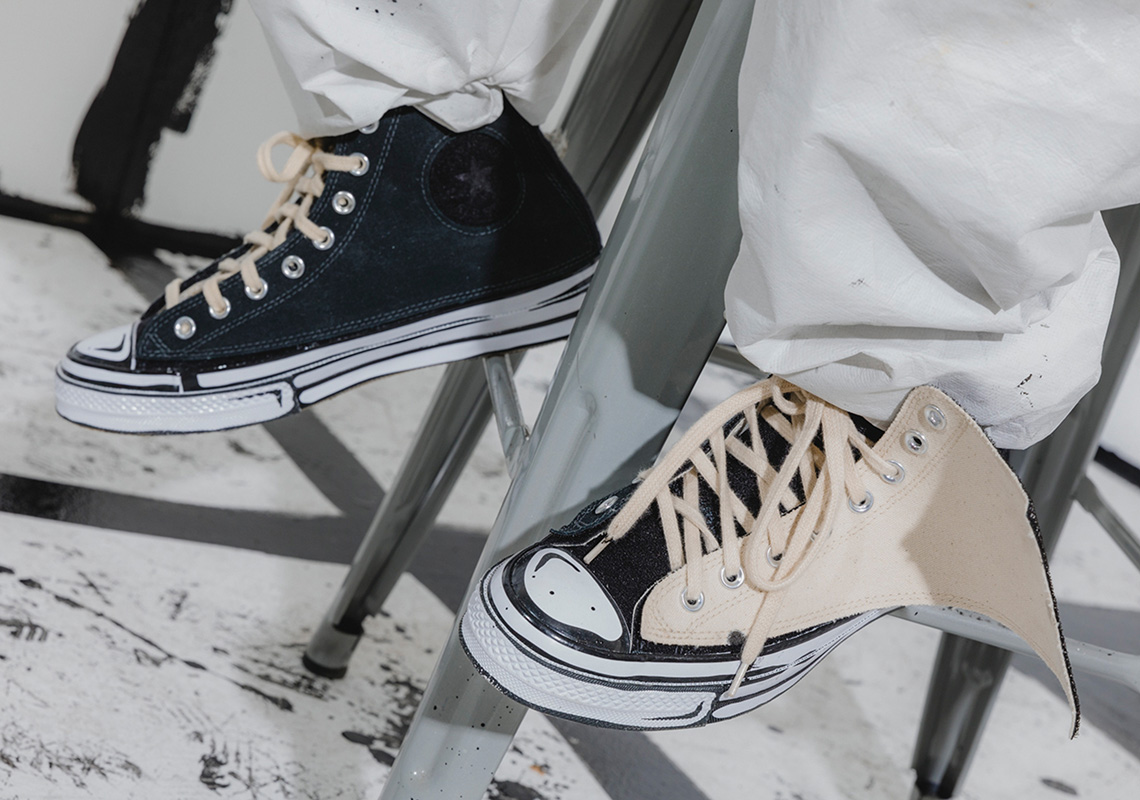 Deconstructed and beat down looks are at a high note in the streetwear world, and these velcro’d out Chucks are a prime example.

In his signature sketch-to-real life style, Guatemalan artist Joshua Vides pulls off some serious swag with this pair.

Riding on the coattails of boundary crushing streetwear trends is the classic Timberland.

Its staple boots have been splashed with colors before, but this time around at Complexcon 2019 we saw the most drastic change yet with a hybrid and experimental “Construct 10061” take on their 6 inch boots.

Only 61 were made, so it’s not surprising that we’re seeing pairs going for over $1000 the retail price on eBay.

About 1 hour south of LA, the masses came down to Snoop’s very own Long Beach to celebrate, among many other things.

Here are the drops from the weekend:

Atmos hit LA with a colorful “Pop the Street” collection on both the classic Air Force 1 low and the largely unknown Barrage Mid.

Both have seen solid resale prices, surprisingly so for the latter, less popular of the two.

A limit of 126 pairs only makes this Kyrie collection, which is a heartfelt tribute to the love of his mother, insanely valuable.

He’s done this before with Kyrie 3’s that are going for over $1000 per pair for the 2017 versions, so it wouldn’t be surprising if this pair rises in the future.

Russian-American entrepreneur Gary Vaynerchuck aka GaryVee has become a household name and meme in the world of entrepreneurship.

He speaks highly of sneaker resellers and encourages them to participate in this market–check out his incredibly inspirational video for sneaker flippers here.

It’s fitting then that GaryVee rolled out a limited pair of sneakers of his own, and despite his name being on a semi-whack brand, it’s selling out–at least in the ComplexCon Coral version.

Atmos is one of the few brands to be in bed with both Nike and Adidas.

Its “Snakeskin” take on the NMD R1 is less popular than its Nike collab, but still has a hype audience of its own.

You can almost bet that if a rapper is famous, he’s gonna have a pair of shoes, even if it’s with a brand most people have never heard of.

This is the case with Rick Ross and Li-Ning’s “Essence”. The brand is actually pretty popular in China, where it was founded in 1990.

It seems that Rick Ross with the help of Dwayne Wayde is helping to bring this brand to the spotlight to the masses, given that his Complexcon version is actually reselling.

You may have heard of the Billionaire Boys Club, but you may not know that mastermind artist Pharrell Williams is the man behind this brand.

In the traditionally ice-cream colorful pastel palatte, we see a collab with Reebok for Complexcon 2019.

Pairs went fast and are among the few Reeboks that are actually flipping for decent cash, making a select few in the know up to $200+ per pair.

Japanese artist Takashi Murakami’s eye catching pop art has caught the attention of both collectors who pay millions and brands who want his name associated with them.

Even Louis Vuitton had a 13 year long collaboration with him.

As crocs are hot now, it’s fitting that Murakami chose them as the perfect canvas to splash his art on.

The resale market took notice as the hype of the $85 pair has people paying up to $400 on the aftermarket per pair.

NYC’s Chinatown Market is another streetwear brand that’s being lifted by collabs with well known commercial entities that need artists to give them the “hip” advantage.

Whether or not they’re selling out is a question that only the individual can answer, but either way, from Converse to Puma, their kicks have turned up dope.

This loud literal pink panther (clever huh, Puma=panther) has semi-transparent mesh uppers and strong yellow branding, making it yet another hot commodity that attendees were given exclusive grabs at.

Wrapping up, is it worth going to Complexcon just for shoes?

Short answer: yes, but even if you’re there, realize that you might end up empty handed if it’s the hottest kicks–being part of an insider community gives you an edge on copping the most exclusive kicks.

So maybe it’s best to go just for the music, or enjoy it for what it is: a work of art.

Everything You Need to Know About Yeezy Slides