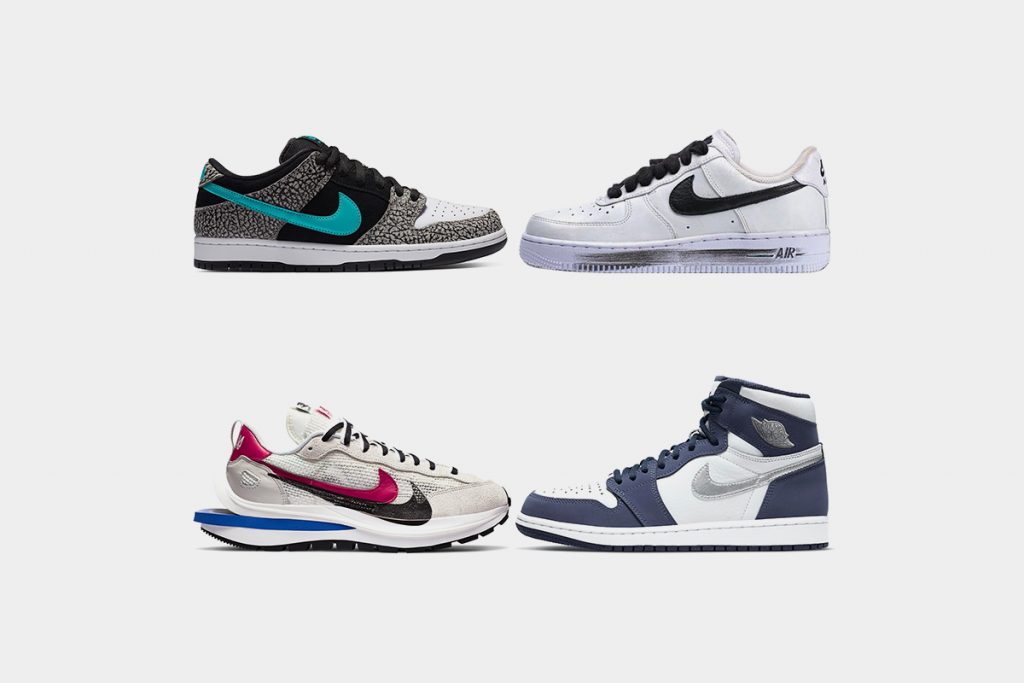 Hey guys, and welcome back to another action-packed month, filled with plenty of great opportunities to make money from sneakers! October was a pretty great month, especially the ending with 2 massive drops back to back; the Off-White x Nike Jordan 5 and the Jordan 1 Mocha drop. Members in the SFSH Winner’s Cricle Cook Group made tens of thousands of dollars from those 2 drops and also the Jordan 1 Lucky Green drop. All sneakers here has a full guide written for your benefit. Click the title to transfer over to our guides.

November is looking just as good as last month, so let’s get to it!

American sportswear giant Nike have had some great collaborations with Japanese streetwear brand sacai, creating some very sought-after sneakers, such as the Nike x sacai LD Waffle and the Nike x sacai Blazer. This time, the two brands collaborate on a new Vaporwaffle silhoutte, releasing in 2 different colourways. They will most certainly be very limited, so make sure to try grab a pair or two when they do drop.
Full guide here.

The year of the Dunk continues, and this time Nike are releasing a 2020 version of this brown, green and purple ‘Veneer’ dunk, after originally releasing in Japan eight years ago. The smaller sizes should perform best in these, but as Dunks are so in demand this year, all sizes should resell for a nice margin above its cheap $100 retail.
Full guide here.

Probably one of the most hyped dunks of the year, this elephant-print Dunk low shows a stark resemblance to the much-loved Air Max 1 collaboration with atmos, a Japanese boutique. This is not an official collaboration, but looks the part of one, which means resell will be through the roof. They will be a very hard cop, but if you do cop one, you will make a lot of money.
Full guide here.

Another Jordan 1 co.jp which has been revived, this time in the Midnight Navy colourway. This Jordan shouldn’t be too difficult to cop, and I recommend going for all sizes under 10 and holding for a few months for the best results. Sizes above 10 should also return profits, but not as much as the ‘money sizes’
Full guide here.

American retailer Concepts has had many famous dunk collaborations with Nike in the past, such as the Purple Lobster and the Green Lobster which were both Dunk Lows, but this time they designed a Dunk High which is based off of a Thanksgiving staple dish which is often associated with former NFL commentator John Madden. Cncpts.com will be releasing the special box variant of this shoe, which retails at $249, while Nike SNKRS will release the normal version at $120.
Full guide here.

Nike and brand Cactus Plant Flea Market have a strong relationship, with the two combining on multiple occasions, such as the CPFM Vapormax, and the CPFM Air Force 1. This time, they collaborate on a Dunk Low. In typical CPFM fashion, this sneaker is extremely loud (it’s covered head to toe in crystals), and heavily in demand. Expect quick sell out times, with the best sizes being size 4 to 8.
Full guide here.

Nike’s Kobe 5 Protro is one of the most popular basketball shoes ever, and this release is a remake of the iconic 2010 Kobe 5 Protro ‘Bruce Lee’. The colourway is inspired from the late Kobe Bryant’s love of Bruce Lee in the film ‘Enter the Dragon’. The best sizes to go for in this shoe are the bigger sizes.
Full guide here.

Adding to the already exciting news of the Bruce Lee color is its alternate brother.

A clean white and black with subtle accents makes it more for those who know, know.

Not quite as hyped as the OG version of the colorway but still profitable and worth going after.
Full guide here.

After last year’s ParaNoise 1.0 Air Force 1 Low being released, Nike decided it was time to release the highly anticipated 2.0, this time in inverted colours. This white pair will be extremely in demand, and stock is likely to be low, so expect it to be quite a hard cop, but the profit margin will be extraordinary.
Full guide here.

Adidas and Kanye West’s Yeezy 500 Utility Black is restocking once again, after restocking last year on Yeezy Day 2019. Although this will now be the third time this shoe has released, the demand is very high for this shoe especially in this all black colourway, so expect resell prices to hold quite steady. Make sure to try cop some pairs, all sizes should perform quite well.
Full guide here.

As you can see, November has some great releases, and more will be added soon as more concrete release information is released to the public. If you copped just one pair of each shoe on this list, it would cost you $750, and would sell for roughly $2,220, which nets you a profit of around $1470. If you aren’t reselling yet, why aren’t you? Check out our highly regarded Hypemaster Playbook if you haven’t already for the all in one guide to building a shoe business. You can also sign up to our newsletter below for a free preview of our flagship Hypemaster Playbook.


Success! Now check your email to confirm your subscription.

More exciting news is that we just launched a YouTube channel! Be sure to subscribe to us here so you never miss a video on new sneakers. We’ll have much more content coming soon.

Alex is a sneaker collector turned reseller. As a reseller he has supplied some of the top stores in Europe with sought after shoes. He is the leader of Winner's Circle and has taught hundreds of people how to begin and scale their reselling business.
Search