Aside from their popular collaborations with Bathing Ape, Sacai, and Nigo. AMBUSH teams with Nike yet again to grace us with two brand new Dunk Highs! The AMBUSH x Nike Dunk High Black/White and Lethal Pink price is $180 and releases on December 11th. Keep reading to know all about it!

This Multi-Billion Dollar Market sees many popular releases similar to the latest Ambush x Nike collaboration. To get into the reselling game and make thousands every month, you’ll need the right knowledge and guidance.

All of that can be accessed simply by reading our detailed Hypemaster Playbook. This Highly Reviewed Guidebook will teach you how to identify lucrative sneaker reselling opportunities instead of chasing hype.

For free reselling education, sign up for our newsletter below. We drop new blog posts frequently, ensuring that our readers never miss out on the hottest sneaker releases!

Coming back to the AMBUSH x Nike Dunk High Black/White and Lethal Pink. I believe they will be highly sought after and profitable. However, before we estimate their resale values, let’s get into some background information.

The Nike Dunk was a product of inspiration from a lot of previous Nike sneakers.

Peter Moor, who also designed other popular Nike sneakers such as the Air Jordan 1 and the Terminator, took inspiration from those sneakers and came up with the Nike Dunk.

The Nike Dunk launched in 1985 with a more advanced design than its predecessors. It came at an ideal time and reinvigorated basketball culture for many. The SB dunk, however, was officially released in 2002 and was directly inspired by it.

Although the SB Dunk is the more popular sibling among Nike’s catalog, the normal Dunk is not far behind in 2020.

AMBUSH started off in 2008, initially as a Japanese Jewelry label that gradually involved in street fashion. It started off with a couple in Japan known as Yoon Ahn and Japanese rapper, Verbal. Yoon was already an American-Korean jewelry designer that used to make gifts for friends and family.

After shifting to creating unisex fashion clothing, the brand started gaining international recognition. With its clothing and apparel already having made their way onto celebrities such as Kanye West and A$AP Rocky, AMBUSH was ready to take on larger projects.

Apart from scoring huge collaborations with brands such as Nike. VERBAL & Yoon were listed in the top 500 most influential people in the fashion world various times since 2015.

The vision and aesthetical format of AMBUSH always resonated well with Nike. Yoon shared in an interview that “We belong to a generation of designers who grew up on skate culture and street clothes in the 1990s and 2000s”. Thus a collaboration with Nike was inevitable and the Nike Dunk seems to be the perfect canvas for their next project together.

To estimate resale for the AMBUSH x Nike Dunk High Black White and Lethal Pink, let’s head on over to StockX.

The sneakers were among the first-ever created by AMBUSH and Nike. Together with a white variant and various clothing items.

This Air Max 180 features a high-top design with a two-toned black upper that’s contrasted by some grey suede overlay. A clean white midsole is disturbed by an exposed Air Unit, surrounded by a grey hue. A black/white midsole finishes off the design.

On StockX, the average selling price is currently just around $150 making these sneakers not too valuable for resellers. That’s very likely due to the fact that stock was for these sneakers was very high. Plus, since this isn’t a very popular silhouette, they were forced to sit on shelves. The AMBUSH x Nike Dunk Low Pink and White Black will likely have much higher resale.

Among the craziest Nike Dunk designs has to be the Comme Des Garcons x Nike Dunk High Clear.

These sneakers feature a black and white color tone while the side panels and toe box are completely transparent. White appears on the heel and midsole while the rest of the sneaker is shrouded in black, as well as the extended Nike ‘Swoosh’.

The average selling price is currently a whopping $1,050 according to StockX which is a gross profit of over $775. At peak resale prices, gross profits are as high as $1,200. Although the AMBUSH x Nike Dunk High Black/White and Lethal Pink likely won’t have a resale value as high, you can still expect somewhat similar profits.

The Undefeated x Nike Dunk High collaboration was among the very first between Nike and any sneaker boutique.

This sneaker features a clean white leather upper with a white leather overlay. A white ‘Swoosh’ blends in nicely with the rest of the upper while Undefeated branding on the rear and tongue provides contrast. A white midsole and tan rubber outsole finish off the design.

On StockX, the average selling price is $260 which is an average gross profit of around $130 per pair. At peak resale prices, gross profits are around $390 per pair. The AMBUSH x Nike Dunk High Black/White and Lethal Pink both will likely have a higher resale value.

This highly awaited collaboration introduces two new exciting Nike Dunk Highs that are complete opposites of each other. The first sneaker comes in a vibrant pink while the other features more serious color tones.

Both sneakers feature interesting details that distinguish them from other Nike Dunks. First up, the Swoosh extends all the way and goes off at the rear. There’s also an extended heel clip at the rear of each sneaker while the toe box features heavy grain leather relative to the smooth leather used everywhere else.

Co-branding on the tongue and insoles finish off the design. 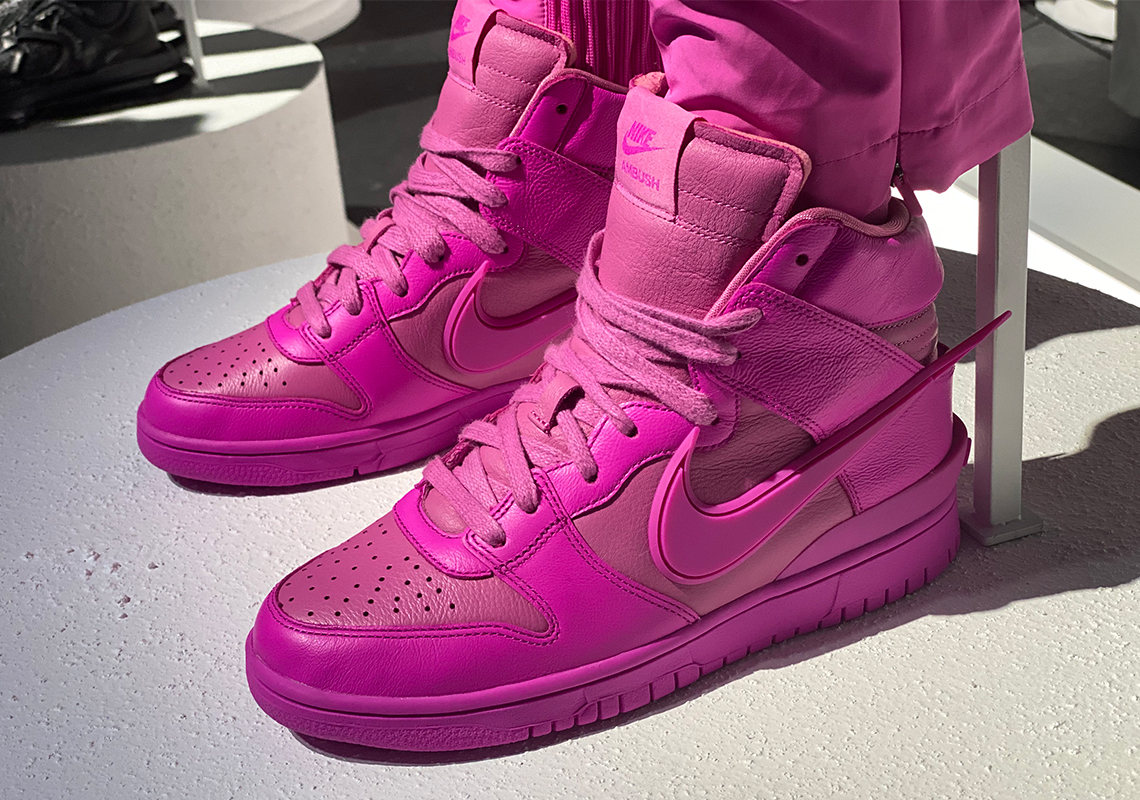 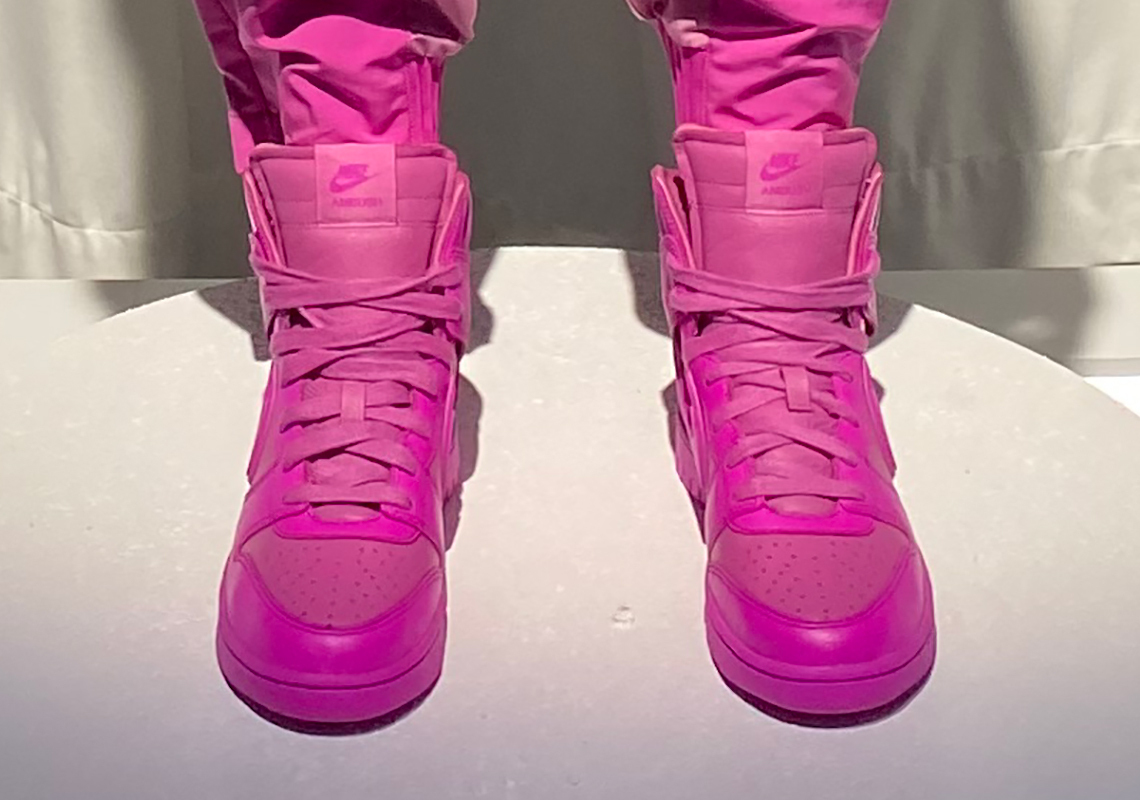 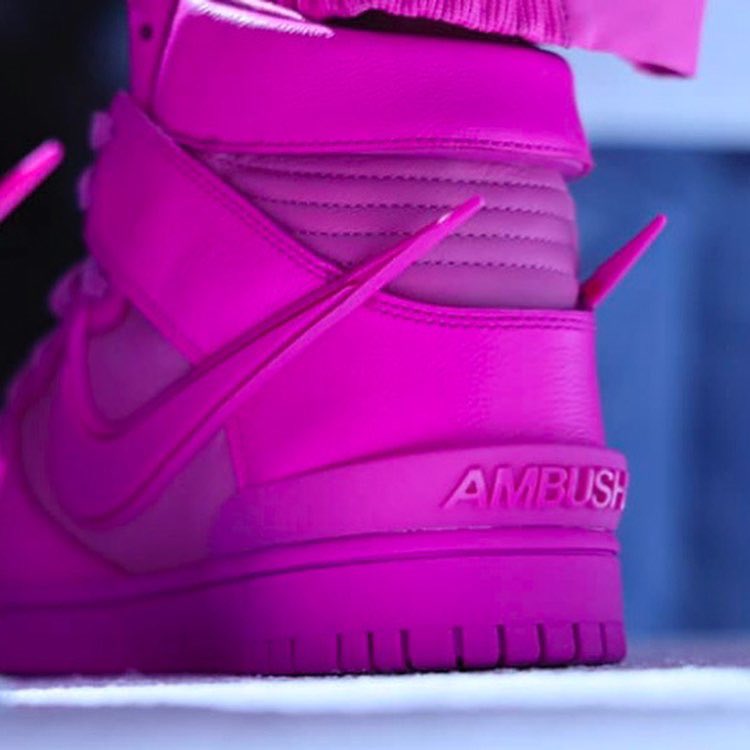 These sneakers are perhaps one of the most hyped sneakers of December and they will definitely sell out very fast. To help improve your chances of copping a pair or two, join our exclusive Winner’s Circle. By signing up for our newsletter, you’ll receive valuable insider knowledge to help you cop the most profitable sneaker releases!

Since this is a hyped collaboration and a very popular Nike sneaker, you might be able to sell these for very high profits. Using my estimated resell value of around $500, if the retail price is around the expected $180, you can expect gross profits of $320. If you can manage to sell before or close to the release date, profits will be much higher as they’re already selling for almost $2,000.

You can buy these sneakers likely at select retailers and Nike SNKRS on December 11th. The retail price for both is TBD.

You may also buy them today at reseller websites such as StockX and GOAT.

By signing up for our newsletter, you’ll get access to a preview of our Hypemaster Playbook for free!