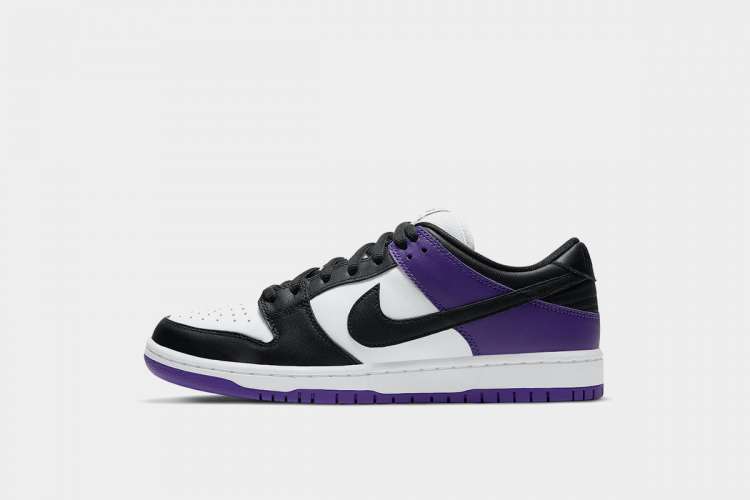 The Nike Dunk Low returns in a brand new colorway which has been previously used on one of the most popular Jordan sneakers ever. The Nike SB Dunk Low “Court Purple” Release Date is January 23rd with the usual attractive retail price of $100. Stay tuned as we dive in for all the details!

We’re only halfway through January and there are still plenty of profitable drops yet to come. Check out our top picks for January 2021’s best sneakers to resell!

Before we take a detailed look at the Nike SB Dunk Low Court Purple, let me walk you through its history!

Great things are often products of inspiration from other things and collectively become what they’re known for.

Peter Moor, who also designed other popular Nike sneakers such as the Air Jordan 1 and the Terminator, took inspiration from those sneakers and came up with the Nike Dunk in 1985.

The Nike Dunk launched in 1985 with a more advanced design than its predecessors. It came at an ideal time and reinvigorated basketball culture for many. The SB Dunk, however, was officially released in 2002 and was directly inspired by it.

Nike’s SB Dunk Includes small changes that make them even more appealing to skateboarders such as Nylon tongues. Interestingly enough, SB Dunks also feature superior padding and cushioning even though both shoes retail for the same prices.

Today, the SB Dunk is considered to be more sought after than its regular Dunk counterpart, and for good reason.

Nike SB’s Reign| Will it Continue?

In 2020, two sneakers rose to dominance and were one of the most sought after sneakers anywhere. The first is the regular Nike Dunk while the second is the more popular Nike SB Dunk.

Starting off 2020, Nike treated fans to a Strangelove SB Dunk Low for Valentine’s day which was quite the head-turner. However, Nike didn’t stop there and continued to deliver hit after hit Dunks and SB Dunks throughout the year.

It appears Nike is set to push even harder for better Dunk and SB Dunk releases as so many have already flooded the market in the first month of 2021.

To help us estimate resale for the Nike SB Dunk Low Court Purple, let’s head on over to StockX. Assessing similar sneakers can give us a good idea of what to expect.

This sneaker features smooth white leather underlays that appear on the toe boxes and side panels. Varsity Purple overlays are featured on the ‘Swoosh’, toes, eye stays, and rears. A white midsole and translucent outsole complete the look.

Average selling prices on StockX are currently at around $220 which is almost a $100 profit. They’ve also been sold for profits as high as $200 per pair. The Nike SB Dunk Low Court Purple will likely have an even higher resale value.

This SB Dunk ACG terra is inspired by the original colorway which released back in 1991.

Featuring a black-based upper, these sneakers are contrasted by purple overlays on the toe, eye stays, and rear. Bright golden laces provide contrast while an orange ‘Swoosh’ adds even more color.

A white speckled midsole and black outsole complete the look.

The average selling price on StockX is a decent $300 which is a $200 gross profit. Resellers have even sold them for as high as $550 per pair! The Nike Dunk Low Court Purple will likely have a similar resale value.

On StockX, the average selling price is currently at a very decent $550 which is a gross profit of over $450 per pair! These sneakers have even been sold for profits as high as $1,100 per pair! The Nike SB Dunk Low Court Purple probably won’t have profits as high but you can still expect some pretty good returns.

This SB Dunk Low comes in in a popular colorway that’s been seen a few times on the Air Jordan 1 silhouette.

A clean white leather is featured on the side panels and perforated toe boxes. Meanwhile, “Court Purple” appears on the quarter of the sneakers. White tongues feature “Nike SB” and “Dunk Low Pro” branding while insoles are shrowded in black with purple footbeds.

Grab a closer look via these official images.

Everyone probably already knows that these sneakers are going to sell out instantly. We’ve seen in the past with the SB Dunk “Chicago” that Air Jordan colorways usually translate really well into SB Dunk colorways.

Although profits for the Court Purple colorway likely won’t be as high, you can still expect some very decent profits. Using my estimated resell value of $300+, you can expect profits of around $200 per pair!

You can buy these sneakers at select retailers and Nike.com on January 23rd for a retail price of $100 for men’s sizes. The Nike SB Dunk Low Court Purple raffle is currently live now on END.

In other Dunk news, Nike is set to release the Notre x Dunk High Midnight Navy and Orewood Brown later this month!