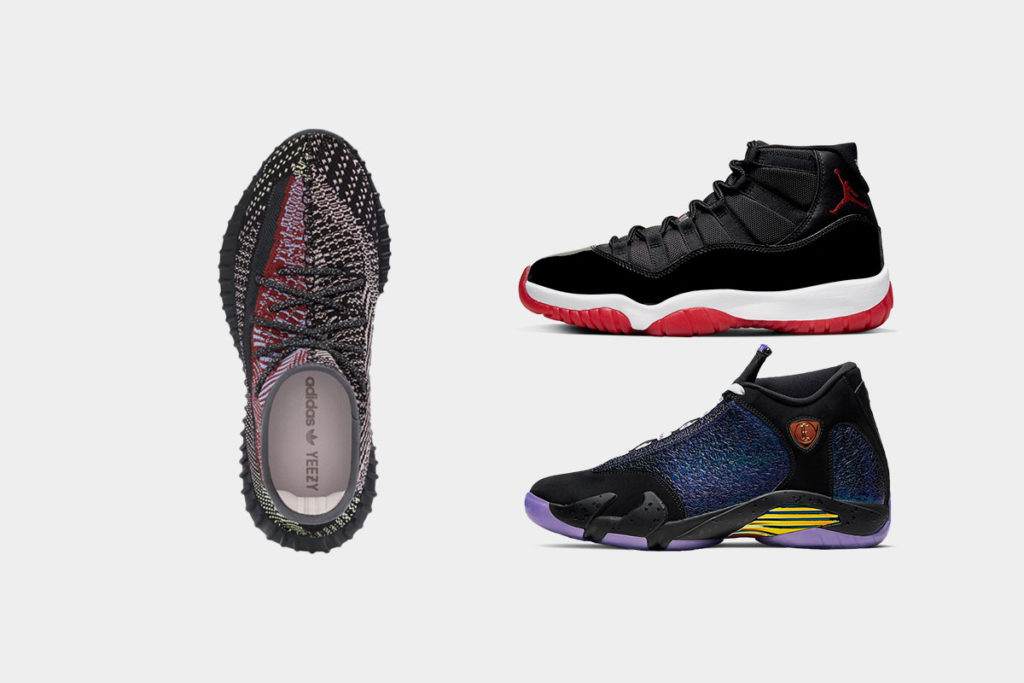 All the sneaker heat that’s brewing should warm you up this winter, as we get underway with this month’s prime money-making drops.

If you have the knowledge and hustle, you can also make a large sum of money from the multitude of December releases.

Last month’s article, as well as our detailed release pieces, equipped many resellers with essential release information in order for them to grab pairs.

This month will be no different, as familiar faces from the sneaker industry attempt to conclude their year.

While this article will briefly scratch the surface, following our Instagram page will better serve you in securing all the drops.

The partnership between OHSU Doernbecher Children’s Hospital and Nike is upon us again, this time starting off the 2019 collection with the Jordan 14.

The TCU inspired sneaker was designed by one of the patients of the hospital—Ethan Ellis.

Doernbecher Hospital provides exclusive special services to children, so it’s only fair that the patients of the hospital will help to design the hospital-inspired sneakers.

Look for more sneaker drops throughout this month from Doernbecher’s partnership with Nike.

Looks like Jordan Brand is continuing their “Fearless Ones” collection with vibrant and creative palettes on some of the most iconic Jordan silhouettes.

After a couple of colossal drops in November, look for Edison Chen’s CLOT’s contribution to the “Fearless Ones” collection in December.

As one would expect, CLOT’s signature silk design is here to stay—this time dousing the Jordan 1 Mid pairs upper while rounding out the bottom with a bright red outsole. In a crazy culture clash between the dirty south and France, A Ma Manerie is dropping a version of the Air Force 1 that is causing ‘heads worldwide to drool.

A pebbled and multi textured leather throughout shades of black and grey make for one of the classiest Air Force’s yet–luckily you’ll have 2 options and 2 chances at copping these in both high and low.

For some reason, SB’s fly under the radar yet still continue to have models that crush the sneaker resale market in terms of profit percentage.

These multi colored Desert Ore UNC/Royal Blue’s are one to go after–here’s a free full guide on them here.

Off-White and Nike’s partnership in releasing the “Queen” collection for Serena Williams was only the beginning of the women-focused releases.

Virgil will own another release day within the month of December, only this time it will continue his women exclusive collection.

The Off-White designer will take a shot at his take on the Nike Waffle Racer silhouette, scheduled to release in three colorway options: Black/Fuchsia/White, White/Electric Green/Black, and Vivid Sky/Black/Electric Green.

Fresh off of a Yeezy 350 v2 restock, Ye looks to make headlines again on December 12th with another release of his new Yeezy line—the Yeezy Boost 380 “Alien.”

The “Alien” model is appropriate in that the sneaker silhouette possesses an “outer-space” prime-knit upper on the Adidas ever-popular boost technology.

You will want to get your hands on a pair.

It’s only right we start the list off with a “Bred” colorway from Jordan Brand. The Jordan 11 in black and red came as a surprise on November 15th, however, the scheduled drop is on December 14th.

Tinker Hatfield’s creation that attempts to combine luxury with a Chicago Bull’s vibe is set to release as a general release, as apposed to limited stock.

While that isn’t the best news for most sneaker resellers, there’s always a chance to buy and hold to ensure maximum monetary potential.

Another addition to the list is yet again, another Yeezy. This time, coming in the “Yeezreel” colorway is another crowd-enraging Yeezy 350 v2.

The colorways on this model look like an iteration of the Yeezy 350 “Glow”, however, “Yeezreel” features a black and gray Primeknit upper and glow-in-the-dark boost.

Moreover, find the reflective and non-reflective pairs to both be available.

Just when you thought Kanye was listening to his critics and abandoning anymore Yeezy 350 colorways, you remind yourself how Ye became Ye in the first place.

A black primeknit upper with hints of red and yellow douses the sneaker, while a bold black stripe runs parallel with the matching black boost.

The abstract red and yellow element is hard to swallow for many sneakerheads, however, that’s not stopping Ye from doing his thing.

The December list is becoming ubiquitous with the Yeezy drops, apparently, the “Follow God” rapper is attempting to round out the year with a bang.

While the Yeezy Slate model is essentially a high-top iteration of the Yeezy 500, the dark blue suede with an adiPrene midsole is still one of a kind.  In addition, that midsole will consist of Adidas shock-resistant technology.

Critics have made their voice known that the sneaker looks all too similar to the Jordan 11s, nonetheless, that’s not stopping Kanye’s creative mind.

A part of the Yeezy 700 line, this iteration is to be a conglomerate from past Yeezy 700s, including Mauve, Salt, Intertia, and the original Wave Runners.

This leather, suede, and mesh make-up is set to release December 18th.

This is one of those gems that could easily be $500+ super limited grails based on their looks, but thankfully the Nike gods have spared us with such scarcity.

You have a medium difficulty chance of copping these for retail.

Check out our free guide here for a knowledge dose and breakdown of getting these and other Jordan 3’s for retail.

The alliance between Virgil and Nike has produced some major heat, and their twist on the Nike Dunk Lows is no different.

We’ve been waiting for these for a while.

Wrapping up yet another Yeezy packed month is the long awaited v3 of the 700–it was announced last second, so this could be a rumor, a shock drop or both.

Either way this one will likely not be a brick as StockX pre-order sales are over $1000 currently (as of mid December).

To further enhance the look, the tongue showcases a tan leather that is commonly seen on Levi jeans.

The sneaker will embody a light and dark blue denim texture sporadically throughout, which is sure to turn heads this winter.

If you were able to grab every pair at retail, including different colors and versions, you’d be looking at a total retail cost of around $3500.

With a peak resale number of over $6000, you’re looking at a potential profit of over $2500 if you’re able to manage just one pair each–and remember, there are people out there getting multiple pairs.

As the end of the year 2019 is looming, the releases have started to ramp up, as many companies attempt to squeeze in their new models before the new year.

Consider signing up to our email list to be notified of all the drops this winter, as well as becoming a member of the SFS Cook group. In addition, you’ll be granted a free preview of the Hypemaster Playbook for all your reselling essentials.

I hope everyone cops many releases this Month!

Robby is a sneaker fanatic with good experience in the reselling industry, but even more so in the sneaker community as he carries his passion with pride.
Search